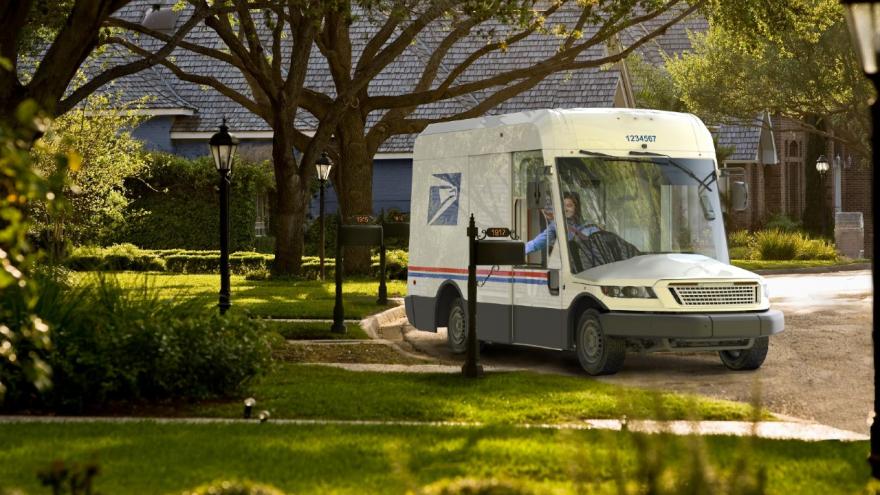 (CNN) -- Few things have changed less during this century than this nation's fleet of postal delivery vehicles.

The squat, box-like van (OK, let's just call them what they are--ugly) a steering wheel on the right to make it easier for drivers to reach out and put mail in curbside. They have few creature comforts, such as air conditioning. They are designed to be rugged, not flashy. They have lived up to their name, the Grumman LLV, for long-lasting vehicle.

This ubiquitous fleet of 200,000 vehicles has been around longer than such common features of modern life as smartphones, online shopping, social media, streaming services Google. About 70% of them are between 25 and 32 years old. DVDs have come and gone into people's that time.

But their days are finally numbered.

On Tuesday the US Postal Service unveiled a contact for NGDV. And when they start hitting the road in 2023, they may take some getting used to.

The new van has a low engine compartment and hood and a very high windshield. It looks like a duck's head, complete The back is tall enough for a letter carrier to stand-in.

It also has safety features missing from many of the current vehicles, including — believe it or not — airbags, which are standard features in virtually all motor vehicles today.

The vehicles will have more cargo space than current vehicles, allowing USPS to deliver more packages, a growing and profitable part of its business, rather than traditional letters, a segment that's shrinking.

Many but not all of the NGDVs will be electronic vehicles. With electronic changing at a fast pace and the vehicles designed to last decades, the contract calls for the electronic versions to able to be retrofitted to keep pace with advances.

The rest will be what the USPS says will gasoline engines. The precise mix between EVs and internal combustion engines has not been set. But the mix has already elicited criticism from environmentalists.

"The USPS NGDVs should be electrified as a matter of urgency," said Robbie Diamond, president of Securing America's Future Energy, or SAFE. "This contract is a golden opportunity to stimulate the domestic EV market and supply chain, and a commitment to electrifying the NGDV would provide a clear incentive for further domestic EV industry development."

The vehicles have also been in the works for years. USPS has been working on the project with potential suppliers since 2016.

The contract announced Tuesday was to Oshkosh Defense, a unit of Oshkosh Corp.

Under the contract, it will build between 50,000 and 165,000 vehicles over a period of 10 years. It will initially get $482 million to initiate engineering efforts to finalize the production vehicle design, and for tooling and factory build-out activities that are necessary prior to vehicle production.

The amount of the contract to purchase the production version of the vehicles has not yet been set, but it will almost certainly be a multi-billion dollar deal.

Shares of Oshkosh jumped 6% in late trading after the announcement and were up another 7% in after-hours trading.