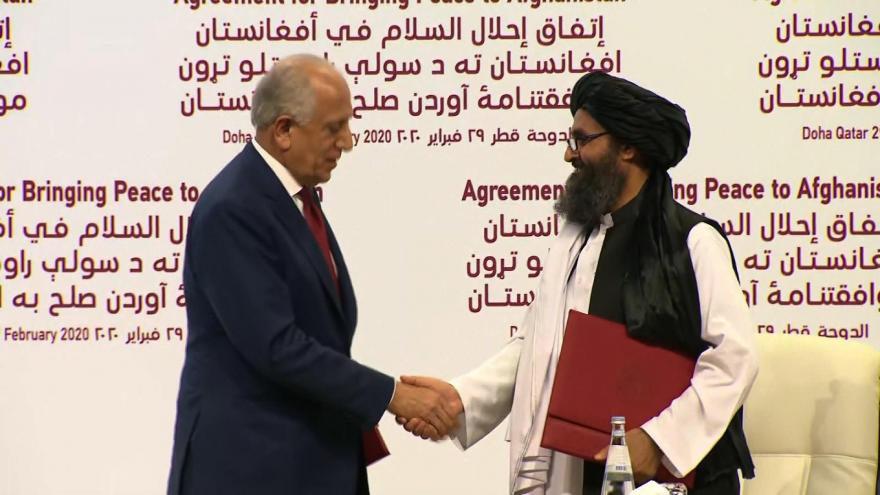 In the month following the signing of the Trump administration's peace deal with the Taliban, the insurgent group increased its attacks on America's Afghan allies to higher than usual levels, according to data provided to the Pentagon's Special Inspector General for Afghanistan Reconstruction.

(CNN) -- In the month following the signing of the Trump administration's peace deal with the Taliban, the insurgent group increased its attacks on America's Afghan allies to higher than usual levels, according to data provided to the Pentagon's Special Inspector General for Afghanistan Reconstruction.

"The signing of the U.S.-Taliban agreement followed a successful week-long 'reduction in violence' by U.S., Coalition, Afghan government, and Taliban forces. However, immediately afterwards, the Taliban increased its attacks on Afghan security forces," John Sopko, the Special Inspector General for Afghanistan Reconstruction, wrote in his introduction to the SIGAR quarterly report.

The US-led international military operation in Afghanistan told the inspector general that from March 1 -- 31, "the Taliban refrained from attacks against Coalition Forces; however they increased attacks against (Afghan National Defense and Security Forces) to levels above seasonal norms."

"Although not all such attacks are expressly prohibited by the text, U.S. officials had said they expected the level of violence to remain low after the agreement came into effect," Sopko said.

The coalition is no longer releasing data on the number of Taliban initiated attacks, citing the sensitivity of the ongoing negotiations with the Taliban.

Resolute Support told the inspector general that the data "are now a critical part of deliberative interagency discussions regarding ongoing political negotiations between the U.S. and the Taliban."

The Department of Defense said in a statement Friday that it "has not classified the data," saying "it will be releasable to the public when no longer integral to these deliberations, or the deliberations are concluded."

"The U.S., NATO and our international partners have been clear that the Taliban's level of violence against the Afghan National Defense and Security Forces is unacceptably high," Pentagon spokesman Lt. Col. Thomas Campbell told CNN.

Pentagon spokesman Jonathan Hoffman said Friday that the Pentagon and State Department are pushing diplomatic solutions to lessen the attacks.

"I don't want to say just because you are not seeing an increased military response to it, it doesn't mean we are not pulling other levers in an effort to get that number down," Hoffman told CNN during a news conference Friday.

However, in March Secretary of State Mike Pompeo told reporters that the Taliban had "committed to reducing violence; they have largely done that."

The UN assistance mission in Afghanistan issued a report last month that found the number of civilians killed by the Taliban increased in the weeks following their signing of the agreement with the US government.

In late February, the US and Taliban signed a historic agreement, setting into motion the possibility of ending America's nearly two decades long involvement in the war.

The "Agreement for Bringing Peace to Afghanistan" outlined a series of commitments from the US and the Taliban related to troop levels, counterterrorism, and the intra-Afghan dialogue aimed at bringing about "a permanent and comprehensive ceasefire."

The agreement laid out a 14-month timetable for the withdrawal of US military forces, its allies and coalition partners.

CNN reported on Thursday that the US now has fewer than 10,000 US troops in Afghanistan and is ahead of schedule on its commitment to drawdown troops.

The Pentagon has declined to discuss US troop levels in Afghanistan and several aspects of the US-Taliban agreement have not been released to the public.

Hoffman said that the Pentagon has not sought to adjust those withdrawal plans in response to the increased Taliban attacks.

However, some initial deadlines on diplomacy laid out in the US-Taliban agreement have come and gone.

Intra-Afghan negotiations have not begun and the effort to release as many as 5,000 Taliban prisoners has not been successfully completed.

The US has been at war in Afghanistan since 2001. The signed agreement in February came after more than a year of on and off negotiations with the Taliban.

This story has been updated to include reaction from the Pentagon.