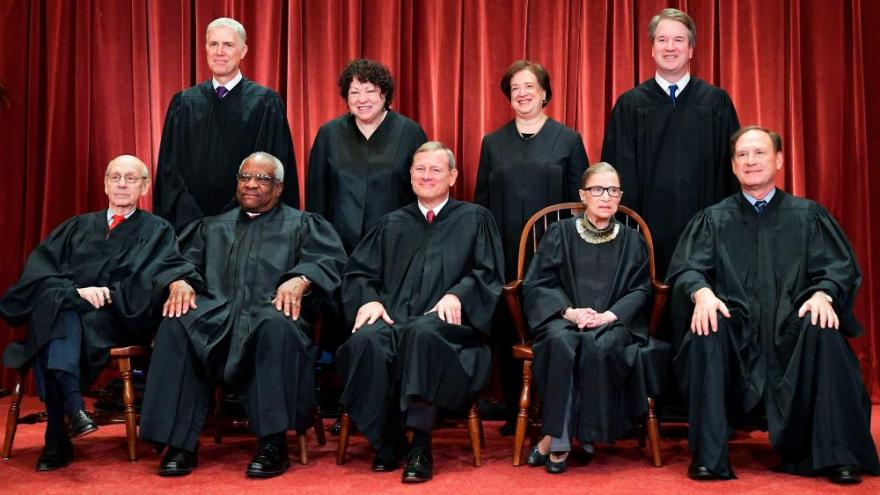 (CNN) -- When the Supreme Court hears arguments next month by phone for the first time in the court's history, the justices will change their normal protocol and try to avoid their familiar interruptions.

The justices will ask their questions in order of seniority, with Chief Justice John Roberts going first, the court announced Tuesday.

The move signals that the court wants to avoid a free-for-all and ensure an orderly process with as few interruptions as possible as the participants will not be able to pick up visual cues and will instead be dependent upon teleconferencing equipment.

Under normal circumstances, the court is considered a "hot bench," with justices frequently interrupting each other and the lawyers before them. Roberts has had to step in as a kind of traffic cop at certain times.

Under the new system that will be in place for arguments beginning on Monday, a justice will get the chance to exhaust his or her line of questioning before the next justice begins. If there is time, according to a release from Kathy Arberg, the Court's public information officer, any remaining questions can be asked after the first round is over.

Arberg said the changes were made in "keeping with public health guidance in response to COVID-19."

In all, the court will hear 10 cases over the next two weeks. The most noteworthy cases fall on May 12 concerning President Donald Trump's bid to shield his financial records from release.

The sessions will mark the first time in history that members of the public will be able to listen in to arguments real time.

The morning of arguments, all of the lawyers on the case will call into the teleconferencing system at 9:15 a.m. ET, 45 minutes before arguments are set begin at the customary 10 a.m. They will be placed on a conference call with the Clerk of the Court, Scott Harris, to receive any last-minute instructions. Their line will then be muted until 9:50 a.m. and they will be moved to a main conference call line to await the beginning of arguments.

At 10:00 the justices -- working remotely -- will join the call. Pamela Talkin, the Marshal of the court, will open the session and Roberts will announce the first case and acknowledge counsel.

Following the court's usual practice, the lawyer will get two minutes of uninterrupted time.

Roberts will then have the opportunity to ask questions, and when that is complete, the next most senior justice will begin, and on down the line.

Justice Clarence Thomas rarely asks questions at oral arguments, so he may choose to pass.

After all the lawyers have spoken, the lawyer representing the petitioner in the case will receive three minutes for rebuttal.

If there is another case that day, it will begin promptly after the first has competed.

The US Court of Appeals for the District of Columbia held arguments using a similar protocol this week. There were some technical glitches, and the arguments extended longer than anticipated, but there were few interruptions.