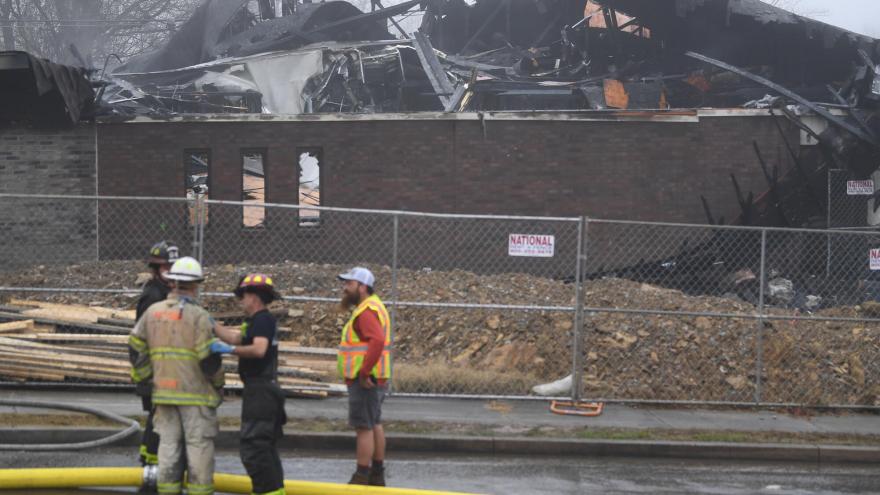 The fire took place just after 6:30 a.m. on New Year's Eve when firefighters responded to the facility with nine firefighting units and 30 fire department members. The blaze completely destroyed the building, the department said, calling it a "total loss."

The building was being renovated at the time of the fire, so it was closed for business and no injuries were reported, according to the fire department.

"Knoxville Fire Department investigators, along with assistance from the Bureau of Alcohol, Tobacco, Firearms, and Explosives (ATF), have conducted a thorough scene investigation of the December 31st 710 N. Cherry Street - Planned Parenthood fire and determined the fire to have been purposely set by an individual or individuals who, at this time, remain unidentified," the fire department said in a statement.

Authorities have offered a reward of up to $10,000 for information leading to the prosecution of anyone involved in the fire.

Planned Parenthood has more than 600 health centers across the US, providing a range of reproductive health services, including abortion.

The arson wasn't the first time the Knoxville facility was targeted.

On January 22, 2021 -- the anniversary of the landmark Roe v Wade abortion ruling by the Supreme Court -- someone shot out the front glass door of the facility and bullet holes were also found throughout the back of the front reception area, according to Knoxville police.

The fire comes amid a nationwide debate on abortion that is playing out in US courts. Just recently, abortion providers asked the Supreme Court to require a conservative federal appeals court to return their challenge to Texas' six-week abortion ban to a district court judge who previously ruled in their favor.

Planned Parenthood described the arson as appalling and said it would rebuild.

"While the investigation continues, Planned Parenthood now turns towards recovery and renewal," said Ashley Coffield, president and CEO of Planned Parenthood of Tennessee and North Mississippi. "Our priority is to establish a safe operating site and reconvene services for our patients as soon as we possibly can. Although it will take time to rebuild, we are committed to our patients in East Tennessee and will not let this attack take away the essential health care services on which they rely," Coffield said.

Alexis McGill Johnson, president and CEO of Planned Parenthood Federation of America, said the attack was about more than the building itself.

"It must be made clear that these hateful acts go much further than property damage — they harm the patients who depend on safe Planned Parenthood health centers, staff, and providers to receive trusted, essential health care services," she said.