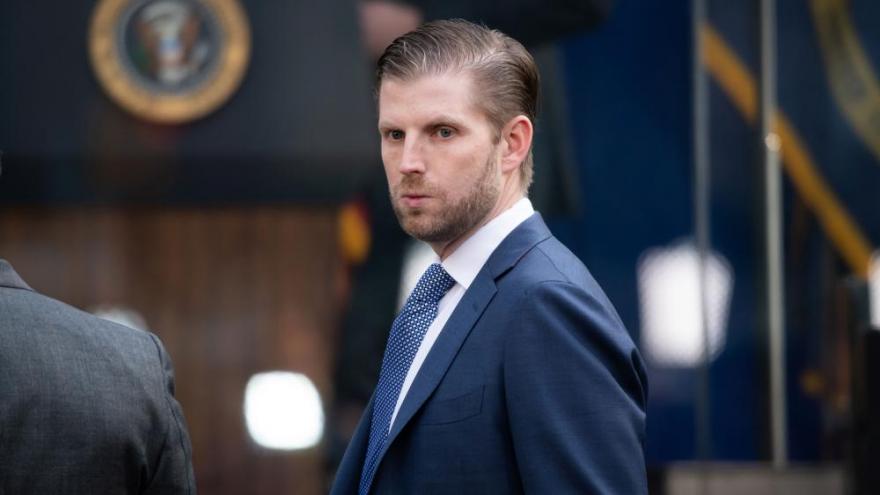 The New York state attorney general is asking for a court to compel Eric Trump to be deposed in an investigation of the Trump Organization.

(CNN) -- The New York state attorney general is asking for a court to compel Eric Trump to be deposed in an investigation of the Trump Organization.

In court filings Monday, Letitia James' office said Eric Trump initially agreed to sit for a deposition on July 22, only to refuse, "balking less than two days before he was scheduled by agreement to give testimony."

James' office outlined the scope of the investigation into whether the Trump Organization "improperly inflated the value of Mr. Trump's assets on financial statements in order to secure loans and obtain economic and tax benefits."

The attorney general's office has been investigating President Donald Trump and the Trump Organization since 2019, when Trump's former attorney Michael Cohen testified before Congress that Trump's annual financial statements inflated the values of his assets in order to secure favorable loans and insurance coverage, but deflated the value of other assets in order to reduce real estate taxes.

In the filing, James' office states Eric Trump's attorney sent a letter to the attorney general saying he would invoke "those rights afforded to every individual under the Constitution" as justification not to testify.

CNN has reached out to an attorney for Eric Trump for comment.

"There has been no lawsuit filed by the NY Attorney General," Garten said. "This is simply a discovery dispute over documents and the like. As the motion papers clearly state, the NY AG has made no determination that anything was improper or that any action is forthcoming. We will respond to this motion as appropriate."

James' office also seeks a judge to compel testimony from other witnesses and documents.

The filings allege, among other things, that Trump has omitted the Trump International Hotel and Tower Chicago from his financial statements since 2009, and that in 2010, Fortress Credit Corporation agreed to forgive more than $100 million of the $150 million that was owed on the loan, as part of a discounted loan prepayment agreement. The filing states that the amount of money that was forgiven "may have been a taxable event to the borrower," and part of James' investigation is to determine if Trump listed that on his tax returns.

Duncan Levin, a former federal prosecutor who specialized in prosecuting financial crimes, said James is likely asking for the President's tax returns as part of the investigation.

"Loan forgiveness in virtually every instance should be disclosed to the IRS and the state tax authorities as income, and failure to list that could be a violation of state and federal tax law," Levin said. "It certainly sounds like the attorney general is asking for Trump's tax returns."

Levin said that while the Trump Organization could argue that James' office does not have the authority to request Trump's tax returns, the Attorney General's Criminal Enforcement and Financial Crimes Bureau has the jurisdiction to investigate "complex financial crimes which cross county lines."

The attorney general's inquiry is separate from a broad criminal investigation into the Trump business by the office of Manhattan District Attorney Cyrus Vance. The district attorney has been in a protracted legal battle to obtain eight years of Trump's personal and business financial records and tax returns. Lawyers for the district attorney have said the tax returns are key to their investigation.