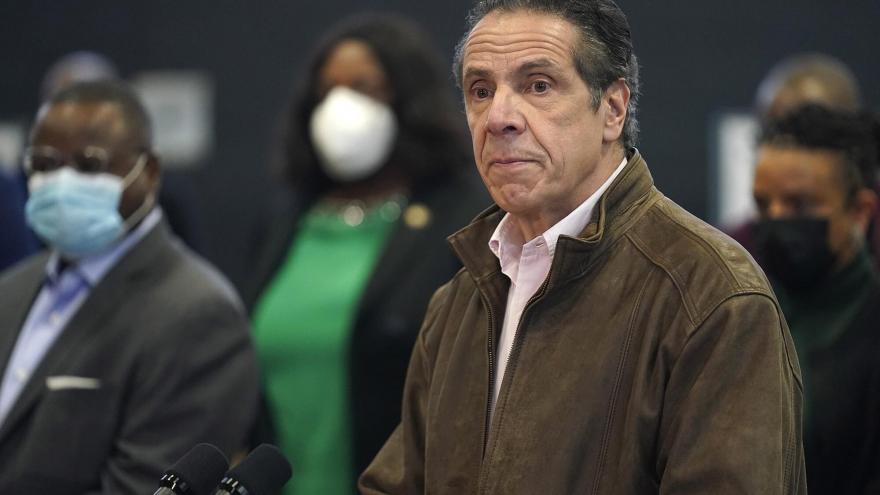 (CNN) -- New York Democratic Gov. Andrew Cuomo was under renewed political pressure on Thursday after the speaker of the state Assembly authorized the judiciary committee to begin an impeachment investigation and dozens of Democratic New York state lawmakers called for Cuomo to resign.

State Assembly Speaker Carl Heastie made the decision after meeting with the Assembly Majority Conference, a meeting he announced earlier Thursday.

"The reports of accusations concerning the governor are serious," Heastie said.

Heastie said he has the "outmost faith" that Lavine and the committee will conduct an "expeditious" investigation.

CNN has reached out to the offices of Cuomo, Lavine and Lt. Gov. Kathy Hochul for comment.

In a statement, New York Attorney General Letitia James said the Assembly's action will have "no bearing" on her investigation.

Calls for Cuomo to resign

Earlier Thursday, more than 50 Democratic lawmakers called for Cuomo's resignation in the wake of sexual harassment allegations and his handling of nursing home deaths, arguing that he has "lost the confidence of the public" and is "ineffective in this time of most urgent need."

"In light of the Governor's admission of inappropriate behavior and the findings of altered data on nursing home COVID-19 deaths he has lost the confidence of the public and the state legislature, rendering him ineffective in this time of most urgent need," the group of 59 Democrats serving in New York state Senate and Assembly wrote in a letter released Thursday.

The letter amounts to the largest show of public pressure the New York Democratic governor has faced from his own party to step down. Jay Jacobs, the New York State Democratic chairman, called for the allegations to be investigated by the legislature. He acknowledged the calls by some Democrats for Cuomo to resign but declined to do so himself, instead saying he would call a meeting of county chairs to hear their views.

In their letter, the lawmakers acknowledge that James's independent civil inquiry into the governor's behavior should continue, but that they can no longer wait for its completion.

"In the meantime, the Governor needs to put the people of New York first. We have a Lieutenant Governor who can step in and lead for the remainder of the term, and this is what is best for New Yorkers in this critical time," they argue.

"It is time for Governor Cuomo to resign," they add.

Cuomo on Sunday said he would not resign and has repeatedly denied inappropriately touching anyone.

The letter's signatories include 19 state senators and 40 members of the state Assembly, including Democratic Assemblyman Ron Kim who alleged last month that Cuomo threatened him and his career.

They add to the top Democrat in the state Senate, Senate Majority Leader Andrea Stewart-Cousins, who on Sunday had said "for the good of the state Governor Cuomo must resign."

Last week, a handful of Democratic state lawmakers and US Democratic Rep. Kathleen Rice of New York demanded that Cuomo leave office in the wake of the mounting allegations. Since then, as two more women have come forward, the list of New York Democrats calling for his ouster has been growing.

New York City Mayor Bill de Blasio also said Thursday that Cuomo "just can't serve as governor anymore." Democrats serving at the national level have been much more muted in their responses, with White House press secretary Jen Psaki this week saying "all women should be heard" but declining to condemn Cuomo over the allegations and referring to the ongoing investigation.

Heastie on Sunday had called the allegations against Cuomo "deeply disturbing" in a tweet, adding, "I think it is time for the Governor to seriously consider whether he can effectively meet the needs of the people of New York."

Until late January, long-term care residents who died of Covid-19 were classified that way only if they passed away inside of a facility. Those who died after being transferred out or to a hospital were not included in that specific figure. The overall number of Covid deaths in New York remained the same, but the practice led to a dramatic misrepresentation of the actual toll in New York's long-term care facilities.

Cuomo and his administration defended their decision, arguing that with both the Justice Department and New York state lawmakers asking questions, the federal inquiry became their priority. The governor has denied any suggestion of wrongdoing.

Amid the criticism over his handling of nursing home deaths, Cuomo also faces accusations from multiple women of sexual harassment or inappropriate behavior.

The firestorm, which has consumed New York politics over the past two weeks, began on February 24, when former aide Lindsey Boylan alleged in a Medium post that Cuomo kissed her on the lips against her will in 2018 after a brief, one-on-one meeting in his New York City office.

Last week, Cuomo offered an apology to the women and said he never knew he "was making anyone feel uncomfortable" and denied touching anyone inappropriately. He rejected calls for his resignation.