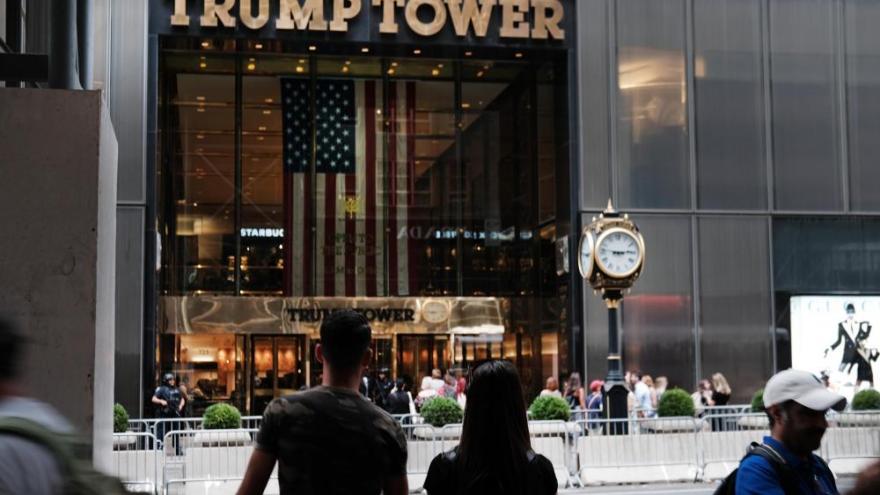 New York Attorney General Letitia James' office says it needs the testimony of former President Donald Trump and two of his adult children to determine their knowledge of what investigators say they have identified as numerous "misleading statements and omissions" in tax submissions and financial statements used to obtain loans, and pictured, people walk by Trump Tower on September 26, 2019 in New York City.

(CNN) -- New York Attorney General Letitia James' office says it needs the testimony of former President Donald Trump and two of his adult children to determine their knowledge of what investigators say they have identified as numerous "misleading statements and omissions" in tax submissions and financial statements used to obtain loans.

In a court filing late Tuesday, investigators stated the office "intends to make a final determination about who is responsible for those misstatements and omissions," adding that "OAG requires the testimony and evidence sought herein to determine which Trump Organization employees and affiliates — and which other entities and individuals — may have assisted the Trump Organization and Mr. Trump in making, or may have relevant knowledge about, the misstatements and omissions at issue."

They write that "witnesses closest to the top of the Trump Organization have asserted their Fifth Amendment rights against self-incrimination. Certain others have professed faulty memories or asserted that they were following instruction from more senior employees."

"But Mr. Trump's actual knowledge of — and intention to make — the numerous misstatements and omissions made by him or on his behalf are essential components to resolving OAG's investigation in an appropriate and just manner," the filing states. "Likewise, Donald Trump, Jr. and Ivanka Trump worked as agents of Mr. Trump, acted on their own behalves, and supervised others in connection with the transactions at issue here; their testimony is necessary for appropriate resolution of OAG's investigation as well."

A spokesperson for the Trump Organization said in a statement Wednesday that James' "allegations are baseless and will be vigorously defended."

Ivanka Trump was a key liaison with lender Deutsche Bank, while Donald Trump Jr. was involved in several properties, including 40 Wall Street, and certified the accuracy of the financial statements from 2017 forward, the attorney general's office said.

In lengthy court filings, investigators said that about a dozen current and former Trump Organization employees have testified and that Trump personally authorized the production of his tax returns.

"In light of the pervasive and repeated nature of the misstatements and omissions, it appears that the valuations in the Statements were generally inflated as part of a pattern to suggest that Mr. Trump's net worth was higher than it otherwise would have appeared," the investigators wrote.

They added that when Eric Trump and Allen Weisselberg, the former chief financial officer, testified in 2020, they both asserted their Fifth Amendment right against self-incrimination in response to over 500 questions each.

Specifically, the New York attorney general's office said it is zeroing in on several specific alleged misstatements including:

One contention by James' office is that Trump hasn't complied with subpoenas for records. As an example, they allege that while Trump did not use email, they learned from witnesses that Trump kept hard copies of documents and used sticky notes to communicate with employees. They said a file cabinet pertaining to Trump's records was never searched to comply with a subpoena.

"This file was never searched because the Trump Organization determined, improbably, that Mr. Trump was not involved in the preparation of his own financial statements," they wrote.

James' office said that the alleged misleading statements were shared with lenders, and insurers alleged that "virtually all of the benefits from the misleading valuations accrued to Donald J Trump." The office also said it has evidence indicating Trump may have obtained more than $5 million in federal tax benefits from allegedly misleading valuations obtained from tax benefits taken at the family compound in New York, known as Seven Springs, and the Trump National Golf Course in Los Angeles.

James' office has been conducting a civil investigation into the Trump Organization and the accuracy of its financial statements since 2019, which Trump has called a political witch hunt.

The former President has sued James alleging she violated his constitutional rights and asked a judge to issue a preliminary injunction blocking the investigation or removing her from it.

James' office subpoenaed Trump and his adult children for testimony in December, leading lawyers for the Trumps to move earlier this month to quash the subpoenas arguing that the attorney general, whose office is conducting a civil investigation and whose attorneys have joined a criminal investigation led by the Manhattan district attorney's office, was trying to "circumvent the entire grand jury process."

A deposition in the civil case, they wrote, "is effectively the same as a deposition by the DANY, but without providing the constitutional protections afforded every witness through the grand jury process."

Witnesses called before a New York state grand jury are given transactional immunity for their testimony and can't be prosecuted unless they lie under oath. James, they argued, is trying to get around those rights by seeking the testimony in a civil case, which could then be used by criminal prosecutors. If they don't testify, in a civil case a jury can hold that against defendants or draw an adverse inference.

In the Tuesday filing, James' lawyers rejected the argument, arguing that the Trumps could assert their Fifth Amendment protections against self-incrimination.

"Each witness is free to invoke their Fifth Amendment privilege against self-incrimination. A witness's exercise of that right in a civil investigation (or any other civil or administrative proceeding) is neither uncommon nor a denial of a constitutional right," the attorneys wrote.