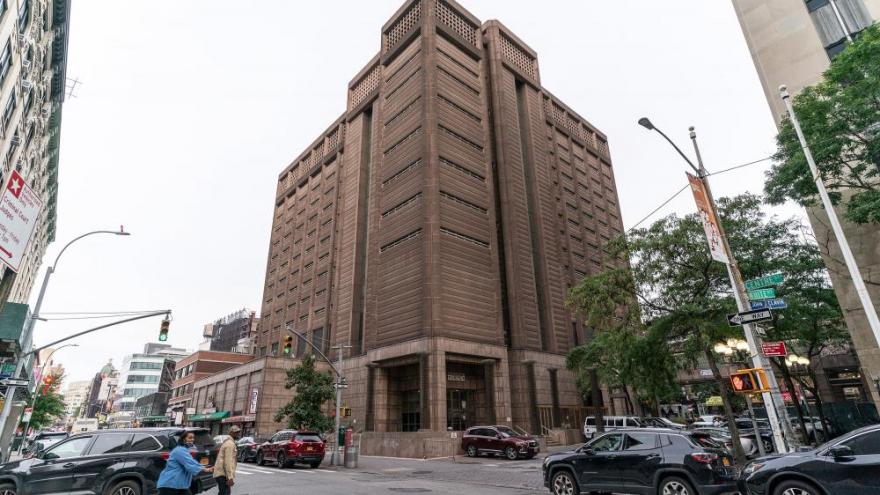 A captain with the New York City Department of Correction has been charged with criminally negligent homicide for allegedly ordering subordinates not to help a detainee as he hanged himself in a cell. The Manhattan Detention Complex, known as "The Tombs," is pictured in this image from October 2020.

(CNN) -- A captain with the New York City Department of Correction has been charged with criminally negligent homicide for allegedly ordering subordinates not to help a detainee as he hanged himself in a cell.

Rebecca Hillman, 38, was charged in the death of Manhattan Detention Complex inmate Ryan Wilson, according to a grand jury indictment.

Hillman was arraigned before Judge Laura Ward and pleaded not guilty on Monday, district attorney's office spokeswoman Naomi Puzzello told CNN. She was released on her own recognizance, Puzzello said.

"As alleged in the indictment, the death of Ryan Wilson wasn't just a tragedy -- it was a crime," District Attorney Cyrus Vance said in a news release.

"Our investigation shows that Captain Hillman ordered her subordinates not to take potentially life-saving measures to help Mr. Wilson and failed to call for medical assistance expediently. This callous disregard for Mr. Wilson's safety resulted in an irreversible loss to his family and friends and must be held criminally accountable," the release states.

CNN has reached out to Hillman's attorney, Kenneth Montgomery, for comment.

On November 22, 2020, Hillman had decided to have Wilson moved from one housing unit to another inside the detention complex after an argument with another inmate, according to a news release from the Manhattan District Attorney's Office.

In a defendant statement included in court documents, Hillman said that Wilson had told her he "couldn't live there" due to an issue that happened earlier that day. Hillman said that she told Wilson she would return to rehouse him and he responded "OK," according to her statement.

Locked in his unit pending the move, Wilson threatened to hang himself if Hillman didn't let him out of his cell, according to the release.

An officer attempted to calm Wilson down and called for Hillman, but instead of coming immediately, she went into a control room and started filling out paperwork, the release states.

After waiting a few minutes, Wilson began a countdown and then hanged himself. Hillman came out of the control room, but instructed officers to keep Wilson's cell door closed, telling other inmates that he was "playing," according to the release.

Hillman then signaled for Wilson's door to be opened but ordered an officer not to enter, saying that Wilson was faking it "because he was still breathing," according to the release.

In Hillman's statement included in court documents, she said "I observed inmate Wilson standing on the ground in an upright position with what appeared to be a white sheet around his neck tied to the light fixture." She says she then called for a "de escalation unit," as she and the other officer were "outnumbered by the inmates," and fearing it was "a setup for attack."

Non-emergency backup was called, but the door of Wilson's unit was closed again while he remained hanging inside and Hillman left to go on her usual rounds, according to the release.

About 15 minutes after Wilson hanged himself, Hillman gave the order to reopen the cell and called for a medical team. Wilson was cut down by officers who felt a faint pulse and gave him chest compressions, but he was dead by the time medical personnel arrived a few minutes later, according to the release.

Hillman was also charged with offering a false instrument for filing a report that Wilson had asked to be moved to another unit, that his cell door was opened and that he was cut down immediately.