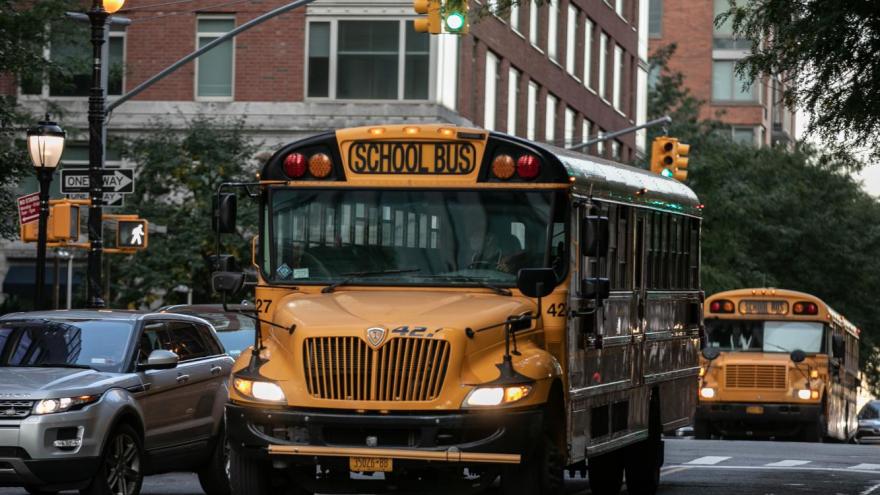 New York City is set to reopen its public high schools on Monday, welcoming some students back to in-person learning about a year after schools first closed because of Covid-19.

(CNN) -- New York City is set to reopen its public high schools on Monday, welcoming some students back to in-person learning about a year after schools first closed because of Covid-19.

The majority of high school students in the nation's largest school district will continue remote instruction. But as many as 55,000 students between grades 9 and 12 who previously opted for in-person learning are expected to return Monday, officials said earlier this month. That's about 20% of the district's high school enrollment, CNN affiliate WABC reported.

Approximately half of the city's high schools will be able to provide in-person learning 5 days a week to all or most of their students, New York's new Education Chancellor Meisha Ross Porter said in a news conference on March 8 with Mayor Bill de Blasio.

In a message to families Friday, Porter said high schools would follow the same protective measures that have been established for younger students who have returned to the classroom, like weekly random testing of students and staff, physical distancing and masks.

Additionally, with spring break set to begin on March 29, students and staff who travel to a place on the state's travel advisory list must quarantine for 10 days, according to the Department of Education, or test out based on state guidelines.

The mayor said children had experienced increased emotional turmoil in the last year during the pandemic, saying in the news conference earlier this month, "Think about the children we've lost to suicide."

"Think about that child that right now is feeling a little hopeless and lonely, what it's going to mean for them on Monday, March 22nd, when they walk back through the door of their high school, see their friends, see their teachers, and have hope again," de Blasio said.

Sports to return next month

High school sports are set to resume in April, city officials said, touting the positive impact they can have on student athletes' mental health. But there will be "strict safety protocols" in place, and de Blasio tried to temper parents' expectations, saying sports events "can't have big crowds."

"We have to protect everyone," he said, "so this is about giving kids a chance to participate."

Younger students have already had the opportunity to return to in-person classes: elementary schools reopened in December, while middle schoolers returned late last month. The push to reopen school for younger age groups occurred because they have struggled most with online learning and they appear to have the lowest rate of coronavirus spread.

The high school reopening comes just a few days after the US Centers for Disease Control and Prevention released updated guidance for children in schools. That included relaxing the physical distancing guidelines, recommending students maintain at least 3 feet of distance, as opposed to the previous 6 feet.

New York City's teachers union, the United Federation of Teachers, told its members in an email Friday it was consulting medical experts about the guidelines. The group said the physical distancing rules "would be extremely complicated to implement" in New York City public schools.

Following the release of the CDC's updated guidelines Friday, Mayor de Blasio announced the city was preparing to allow more students to opt into in-person learning, with an initial focus on pre-K and elementary school students. More details are expected Monday.

De Blasio said Friday he'd been told that more than 40,000 educators had been vaccinated, but he believed the number was much higher.

The mayor has committed to a full reopening for all city schools in the fall.