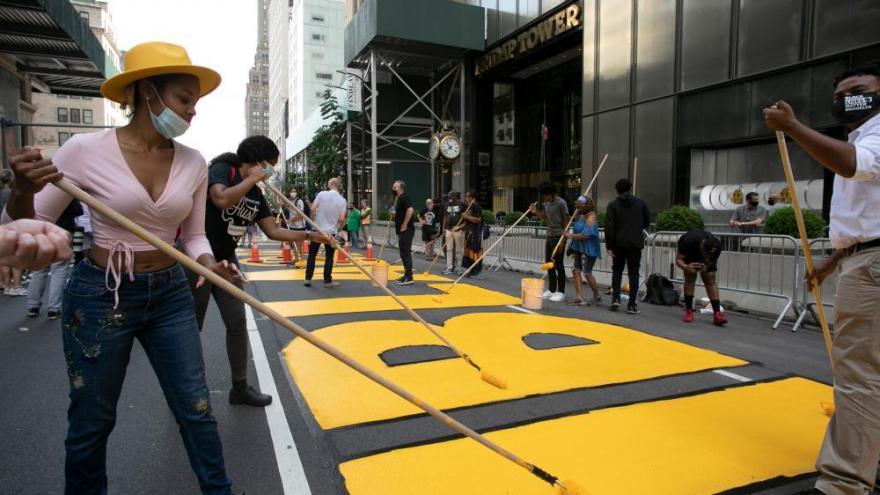 (CNN) -- New York City is painting a Black Lives Matter mural on the street directly outside of Trump Tower in Midtown Manhattan.

The New York mayor rolled up his sleeves and painted a bit of the mural, too, clad in a mask and flanked by civil rights leader, the Rev. Al Sharpton.

He added, "Who built this city, who built this nation, and never got the acknowledgement, the recognition..."

"When we say 'Black Lives Matter' there is no more American statement, there's no more patriotic statement, because there is no America without Black America. We are acknowledging the truth in ourselves and in America. By saying 'Black lives matter' we are righting a wrong," de Blasio said.

President Donald Trump fumed at the plan after it was announced by city officials earlier this month.

He called the words "Black Lives Matter" a "symbol of hate" and suggested that police officers could block the work: "Maybe our GREAT Police, who have been neutralized and scorned by a mayor who hates & disrespects them, won't let this symbol of hate be affixed to New York's greatest street. Spend this money fighting crime instead!"

CNN has reached out to the Trump Organization for comment.

The mural marks the second time the words appeared in large letters outside one of Trump's homes; Washington's mayor had the term painted in large yellow letters on a street near the White House last month.

After the debut of the Washington mural, the local chapter of the Black Lives Matter Global Network called the mural a "performative distraction from real policy changes." Black Lives Matter supporters have repeatedly called on local leaders to cut police budgets, which DC Mayor Muriel Bowser has cautioned against.

New York's city council this month voted to slash the NYPD budget, though even supporters of defunding the police on the council were not satisfied with the budget cuts, which still allowed for two police classes to join the force while freezing new hires in the Department of Education.