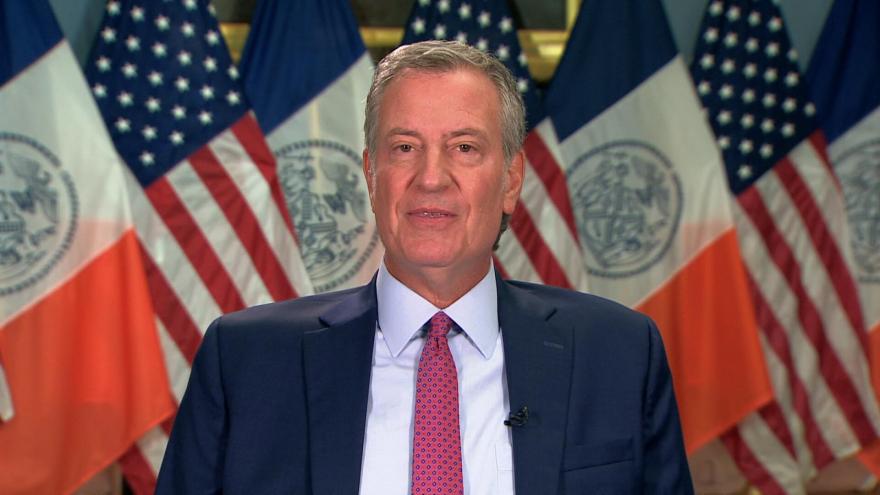 Workers at New York City's public hospitals and health clinics will be required to either get vaccinated or take weekly Covid-19 tests, Mayor Bill de Blasio announced July 21, as the city moves to lean harder on remaining vaccine holdouts.

(CNN) -- Workers at New York City's public hospitals and health clinics will be required to either get vaccinated or take weekly Covid-19 tests, Mayor Bill de Blasio announced Wednesday, as the city moves to lean harder on remaining vaccine holdouts.

Speaking to CNN's John Avlon on "New Day" Wednesday morning, de Blasio called the initiative "fair" and said he hoped it would push hesitant health care workers to get vaccinated rather than submit to repeated tests.

"I understand why a lot of people are hearing misinformation and being affected by it, but enough is enough," de Blasio said. "We need our health care workers to be vaccinated and it's getting dangerous with the Delta variant."

"I think it's time to do something different, and New York City is ready to lead the way. We're saying, get vaccinated, or get tested weekly. And that's fair," he added.

The city's requirement will begin on August 2 and those who refuse both options will be suspended without pay, he said in a press conference Wednesday.

The requirement will apply to all staff in the city's public Health + Hospitals (H+H) health care system and all clinical workers with the city's health department, including doctors, nurses, administrative staff, and custodians. H+H is the largest public municipal health system in the United States, with 11 hospitals across New York City.

New York City Health Commissioner Dr. Dave Chokshi said that they are planning to extend this safety requirement to additional health department staff in the weeks ahead. Health + Hospitals CEO Dr. Mitchell Katz said Wednesday that around 60% of H+H staff are currently vaccinated.

The spread of the more transmissible Delta variant, and a rise in cases across the country, has made the push for vaccinations more urgent.

When asked why he didn't just mandate the vaccine for all health care workers, de Blasio told CNN that "this is a step."

"We're going to look at all the factors of how you move things," he said. "Previously the approach was purely voluntary and that did get us a substantial distance, but now it's time to up the ante, say, 'No longer a choice, you got to do one or the other.'"

De Blasio said he hoped to see initiatives like this all over the country, in private and public hospitals. And he said that it would make sense to take a similar approach for other professions, such as police officers and teachers, too.

Schools still plan to be open

De Blasio also said that the Delta variant and its increased risk of Covid-19 transmission to children will not thwart efforts to open schools this fall.

"What our health care team says is, it's actually profoundly bad for kids' health to be out of school," he said. "And so, we intend all our kids to be back in school."

The mayor also pushed back on requests from New York City Council member Mark Levine and others, who have asked the city's health department to reinstate the mask mandate. Instead, de Blasio has prioritized vaccinations, saying "a mask is a pea shooter and the vaccine is a cannon."

"We'll continue to look at every option depending on what happens. But what I don't want is to give people false sense of security, 'Oh, I'm wearing a mask so I'm OK even though I'm unvaccinated.' That's just not true," he added.

On Monday, Dr. Chokshi similarly emphasized the importance of vaccinations, saying "the single most important thing we can do" is get as many people vaccinated as possible.

Dr. Chokshi added later that over 98% of the people who have died of Covid-19 this year were not fully vaccinated.

As of Wednesday, about 4.5 million New Yorkers are fully vaccinated, comprising about 54% of the city's total population, according to city data. The city has a seven-day average of 582 new daily Covid-19 cases as of Saturday, an increase in recent days but on par with the totals from May.