New York City was never built to withstand a deluge like the one Ida delivered. It showed. 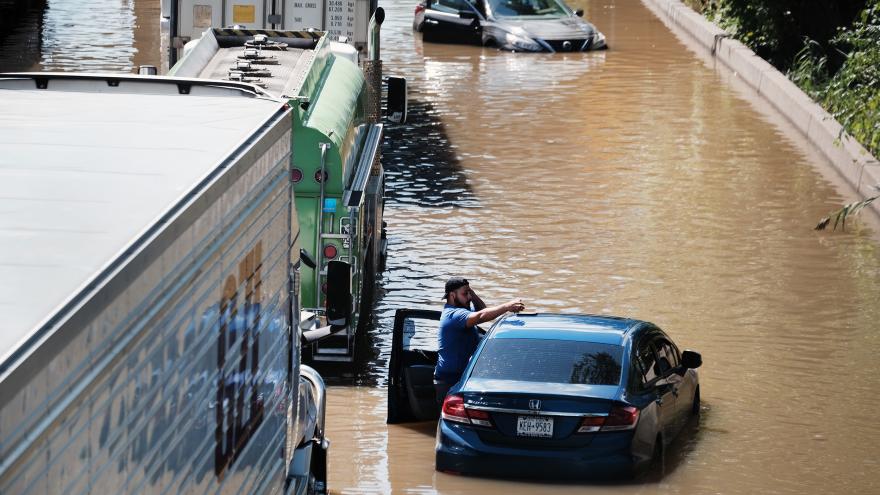 Cars sit abandoned on the flooded Major Deegan Expressway in the Bronx, New York, following a night of heavy wind and rain from the remnants of Hurricane Ida. - Spencer Platt/Getty Images

(CNN) -- When Superstorm Sandy wreaked havoc on parts of the Northeast in 2012, it exposed the dire need to strengthen New York City's infrastructure to adapt to what was then a looming threat of the climate crisis.

Nearly a decade later, the city is picking up the pieces after another climate whiplash it was unprepared for. Within two weeks, two storms -- Henri and Ida -- broke rainfall records in the Northeast. Flash flood emergencies from the remnants of Hurricane Ida stretched for 190 miles from Philadelphia to New York City. Central Park recorded its wettest hour on record, while Newark, New Jersey, recorded its wettest day. As of Friday, the floods had killed at least 46 people in the region.

"This was worse than Sandy, and it happened over a short period of time," Maria Lopez-Nuñez, a resident of Newark, told CNN. "And sadly, our region is not more prepared than when Sandy hit."

When the remnants of Hurricane Ida dumped more than 7 inches of rain on parts of New York City, officials and meteorologists seemed stunned by the devastating flooding that ensued.

"This is the biggest wake-up call we could possibly get," said New York City Mayor Bill de Blasio. "What we have to recognize is the suddenness, the brutality of storms now. It is different."

But climate scientists have warned for years that the more humans heat up the planet, these sorts of extreme rainfall events will occur with increasing frequency and intensity. And in many parts of the country, the infrastructure in place today was built for a climate that no longer exists.

From the deadly heatwaves that scorched the Pacific Northwest to the damage strewn by Ida from Louisiana to New York, these floods are the latest in a string of events that have laid bare just how poorly equipped America is for what climate change has in store.

Climatologist Kim Cobb, director of the Global Change Program at the Georgia Institute of Technology, warned that New York, like many cities, was clearly not prepared to deal with climate-related and weather disasters such as Storm Ida.

"I don't think that what we're seeing today is emblematic of a climate-ready city in New York and, obviously, we have a story coming out from cities across the world — from communities out west grappling with wildfires that are linked to climate change," Cobb told CNN.

"We're just coming out of Ida's devastation across the southeast US -- Louisiana and Mississippi -- infrastructure that is not ready for our climate of now, let alone the climate of tomorrow. These kinds of climate impacts are going to worsen with each additional increment of warming."

As other extreme flooding events have shown — like Hurricane Harvey's record-breaking slog across Texas and Louisiana in 2018 — when huge amounts of rain are dumped on expanses of concrete and pavement, it can be a recipe for disaster, said Philip Orton, a professor of ocean engineering at Stevens Institute of Technology.

When torrential rains fall on these impermeable surfaces, there is simply nowhere for the water to go but into overloaded storm drains. In the case of New York, floodwaters also spilled onto subway platforms and, tragically, into basement apartments, where many victims were trapped.

On Friday, Mayor Bill De Blasio announced a new series of initiatives geared toward alerting and evacuating residents from vulnerable basement apartments ahead of future storms.

Orton said urbanization is likely part of the reason for the devastation seen across the Northeast.

But many of these areas were paved over decades ago. What has changed in the years since is the climate, Orton said.

Extreme rainfall rates such as the one Henri and Ida exhibited — as well as other recent deadly flooding events in Tennessee, Germany and China — are happening more frequently due to human-caused climate change.

A recent UN climate report stated, "the frequency and intensity of heavy precipitation events have increased since the 1950s over most land area." That's especially true in the US, where the heaviest downpours seem to be increasing in all regions of the continental US, with the Northeast region showing the largest increase, according to the US National Climate Assessment.

"People focus on the hurricanes, but the truth is that extreme rain, which can come in the aftermath of a hurricane, like what happened with Harvey and Ida, are the events that we need to be designing for," Laura Clemons, a certified floodplain manager who formerly advised the New York City Housing Authority on resilience strategies, told CNN.

Orton said that there are several steps that cities can begin to take to improve their resiliency to flooding, but the fixes are not simple -- or cheap.

One is to invest in better storm drainage, like larger pipes capable of moving greater amounts of water. But in a city like New York, replacing these aging systems would be an incredibly complex and expensive undertaking, Orton said. And with uncertainty about what the rain events of 5, 10 or even 50 years from now will look like, designing systems that will be able to handle the storms of the future is difficult.

"The insidious problem of climate change is that it's creating this more unpredictable world where scientists, I think, are having trouble telling cities exactly how much more rainfall to expect," Orton said.

Where possible, replacing pavement with green spaces or restoring wetlands and streams is another way to allow rainfall to percolate into the ground and take some of the burden off of stormwater systems.

"What you often see is that these floods are occurring where there was a historical creek -- It's still the lowest-lying point in a neighborhood," Orton said. "There's definitely been increasing interest in recreating those pathways for water to flow ... and I think this may be an impetus for more of that."

Stopping development from occurring in flood-prone areas in the first place is also critical.

The flood maps produced by the Federal Emergency Management Agency (FEMA) are a key tool used by many cities and communities to understand their flood risk. But there are large swaths of the country that FEMA has not mapped and existing maps still do not account for flooding caused by heavy rainfall.

FEMA is expected to roll out a new system for setting flood insurance rates later this year called Risk Rating 2.0, which the agency says will utilize the latest in flood-modeling technology to better capture the risk faced by individual properties.

In the meantime, some cities have taken steps to understand the growing threat posed by heavy rains. In May, New York released a new stormwater resiliency plan aimed at updating flood response procedures and opportunities to invest in more resilient infrastructure.

Unfortunately, it appears those efforts are still being outpaced by the rapidly worsening climate crisis.

"With these uncertainties, it makes [adaptation] more of a challenge, and so we end up in a responsive mode with these floods," Orton said.

In 2014, two years after Sandy, Clemons and a group of experts also designed one of the world's largest stormwater management systems that could mitigate an 8-inch extreme rain event like the one that just devastated New York City.

"We knew this event was coming," said Clemons, who is now the founder of Collaborative Communities, working on hazard mitigation projects. "The data was very clear that the next disaster to hit New York City wasn't going to be a [storm] surge event, it was going to be an extreme rain event."

But Clemons said the $250 million project failed to move forward.

"The plan has existed since 2014 of how to implement a massive stormwater management system that could accommodate exactly this type of event so this type of devastation doesn't happen again," she added.

Oftentimes, urban adaptation plans fail to take into account how it would improve, or worsen, the underlying inequities baked in the fabric of the city's infrastructure.

Climate change-fueled disasters like Ida exacerbate the disparities communities face. According to Eddie Bautista, executive director of the New York City Environmental Justice Alliance, it goes back to discriminatory city planning policies such as redlining — the government-sanctioned effort to segregate communities of color by denying them housing loans and insurance.

A 2019 study of 108 cities in the US found that 94% of historically redlined neighborhoods are disproportionately hotter than other areas in the same city. That's because neighborhoods of color lack community investment such as urban green spaces and tree cover that help cool cities. They also tend to be slotted next to traffic-choked highways and industrial facilities that spew out noxious pollutants, that then warm the planet and fuel stronger hurricanes.

"If your society is structured in such a way where there are haves and have nots and there are winners and losers, then why would you expect it to play out any differently — whether it's climate change or Covid-19 vulnerability and disparity?" Bautista told CNN. "If it's baked into your system and your society, then the impacts for a systemic attack on your society's gonna play out the same way."

After Superstorm Sandy brought unprecedented storm surge to New York City neighborhoods, communities of color were the most exposed to flooding. The storm also disrupted the city's transit system, which many low-income people rely on to get to work. Research also found that data from New York City's 311 system show several calls coming from diverse neighborhoods that had been flooded.

That same scene played out during Ida, which killed dozens of people in New York's outer boroughs including a 2-year-old.

"People keep forgetting that climate change has a body count, especially for people of color," Bautista said. "When the rubber hits the road, we're talking about a subway system that's unusable, a car ownership rate that's nowhere near what White, higher-income folks have in New York. So how are we suppose to evacuate in a city that's a mass transit city with the subway shut down, if people don't have cars?"

With the climate crisis making hurricanes stronger and wetter, new research from Redfin, a Seattle-based real-estate brokerage, found that these historically marginalized neighborhoods will continue to suffer a higher risk of flooding than their white and wealthier counterparts.

"Either we plan for extreme weather events or will we pay the price," said Lopez-Nuñez, who lives in the predominantly immigrant neighborhood of the Ironbound in Newark, also an area that was inundated by Ida.

As the climate crisis accelerates, more people will be vulnerable to the most severe consequences of extreme weather events. Experts say cities shouldn't put off adaptation plans any longer, and instead treat it as a larger emergency response system.

"We're living in a time now where we have to talk about adaptation," Bautista said. "There's a light at the end of the tunnel, but I just don't know how are we going to be able to pull this off fast enough."