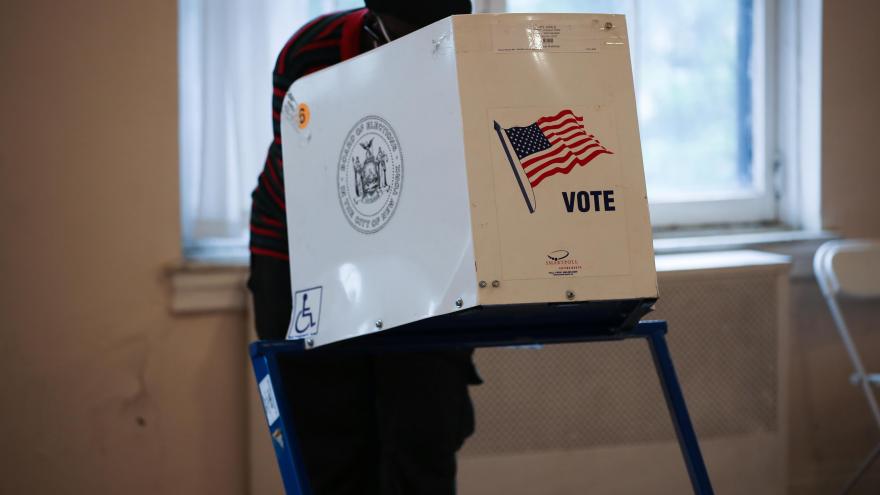 A polling site is seen as early voting in New York City\'s mayoral primary election has started as of Saturday which voters can choose up to five candidates in New York City, United States on June 13. - Tayfun Coskun/Anadolu Agency/Getty Images

(CNN) -- The race to become New York City's 110th mayor began in a pandemic-enforced bubble, with the campaign playing out in drab Zoom forums, on social media and through the press, where email statements took the place of live exhortations to swells of supporters.

But with the city now open as vaccination rates climb and infection rates plummet, the final scenes of this Democratic mayoral primary are unfolding on hot city streets and in-person debate stages. Unleashed at last, the leading candidates and their surrogates are launching increasingly pointed attacks that ricochet across Twitter -- allowing, or compelling, the campaigns to respond in almost real time.

The next mayor will inherit a city decimated by Covid-19, which has killed more than 30,000 New Yorkers and leveled industries, particularly those relied upon for economic survival in already marginalized communities. The rebuilding process, which is already being buffeted by fiercely competing interests, comes amid a surge in violent crime, an issue that has gripped the campaign over the last few months. The shifting and diverse priorities of this vast electorate have only added to the volatility of the primary, an open and often chaotic scrum which attracted more than a dozen candidates.

Meanwhile, the self-interested niceties that some promised would follow the introduction of ranked-choice voting, now making its debut in New York, never materialized. And the top tier of candidates -- Brooklyn Borough President Eric Adams, who is widely perceived as the frontrunner; civil rights lawyer and one-time counsel to Mayor Bill de Blasio, Maya Wiley; former presidential candidate Andrew Yang; and the seasoned veteran of city government, former Sanitation Commissioner Kathryn Garcia -- have shown little interest in pivoting, at the last, to a softer brand of politics.

The new system, though, has provided an opportunity for an eleventh hour gambit by Yang and Garcia.

In twin press releases on Friday night, their campaigns announced that they will stump together on Saturday. The move, which the candidates presumably believe will open doors to second place rankings among their rivals' supporters, follows months of speculation over a potential cross-endorsement. That has not happened yet, at least formally, and both campaigns were coy about what precisely was in the works. Yang and Garcia will appear together for morning events in Queens before heading to Lower Manhattan -- in "the Garcia van" -- for a news conference early in the afternoon.

Yang, who has pivoted from his happy warrior message to a harder focus on public safety, has floated the potential of a cross-endorsement for weeks and has often discussed Garcia in glowing terms. She has been more circumspect, brushing off recent questions about the possibility of teaming up with Yang, who has been teasing a bombshell.

"I am all about running my race," Garcia told reporters on Wednesday in the West Village. "As I've said over and over again: If I had a strong number two, I wouldn't be doing this."

On Thursday in the Bronx, Yang, who voted early, demurred when asked about his ballot. (Yang allowed, to no one's surprise, that Adams, with whom he has repeatedly clashed, did not make the cut. Voters are allowed to rank five candidates; 13 are running in this year's Democratic primary.)

The Adams campaign did not comment on the potential Garcia-Yang pact, but Adams spokesman and adviser Evan Thies retweeted a damning response late Friday from Ashley Sharpton, daughter of the Rev. Al Sharpton, and an Adams supporter.

"This is a cynical attempt by Garcia & Yang to disenfranchise Black voters," Sharpton wrote of their expected cross-endorsement. "We didn't march in the streets all summer last year and organize for generations just so that some Rich businessman and bureaucrat who don't relate to the masses can steal the election from us. Disgusting."

Adams, a retired police captain and former state senator, is believed to be narrowly leading the race and, with time running low, has become the central figure in the final act of this long and bizarre campaign. His strength resides with older Black voters and Whites in the city's outerboroughs, constituencies in which his tough-on-crime rhetoric traditionally resonates.

Over the last few weeks, the location of Adams' prime residency -- and whether it is, actually, a co-op he shares with his partner in New Jersey -- has come under scrutiny, prompting him to invite reporters to an apartment he owns in Brooklyn. A nonprofit website, The City, has reported that he failed to properly disclose a real estate transaction. And, on Thursday night, New York Magazine published a potentially damaging story that dug into, among other things, some unsavory past political alliances.

In response, Adams labeled the New York Magazine piece "racist." Asked by CNN why he believed that, Adams cited the photograph of his face that accompanied the report, which he said was chosen to make him look "mean" or like a criminal, and suggested that the anonymous quotes in the story might have been fabricated.

"To be clear," she wrote, Adams was not saying that the reporter "completely made up the quotes. He was just trying to emphasize that when quotes are unattributed people can say anything, and the story was full of anonymous sources."

New York Magazine defended its report in a statement to CNN.

"The story was carefully reported and fact checked, and we stand by it," the magazine's head of communications, Lauren Starke, said in an email. "The photograph was taken by the documentary photographer Bruce Gilden during a photo shoot with all fifteen mayoral candidates and while it is unfortunate that Adams dislikes it, we do not agree with his assessment that it makes him look mean."

On the stump and on camera, his rivals have been unsparing -- and Adams, even as he repeats to supporters a mantra of "no distractions, stay focused and grind," seems to relish the fight.

Asked how his approach to public safety differed from Wiley's, Adams -- who has advocated for stepped-up policing and the reinstatement of a controversial, recently disbanded plainclothes anti-crime unit -- touted his plans before saying Wiley was disconnected from victims' families and grassroots groups, and lacked an immediate plan to counter the city's rise in violent crime.

"No one wants to really deal with the 'right now' moment," Adams said. "They don't even have a 'right now' plan. They give you a philosophical, Columbia University, theoretical, classroom experience -- listen, we don't need a college professor. We need a professional who knows how to keep this city safe."

Adams' recent drumbeat of criticism prompted a fierce response from a new Wiley endorser, the minister and activist Kirsten John Foy, who challenged the Brooklyn Borough president over his record on "transparency" and "affordable housing," before defending Wiley.

The outspoken Foy also had some harsh words for Garcia, a moderate who has slowly built support among a base that views her as an efficient technocrat with unmatched experience in government. He accused her of quietly cozying up to the leadership of the Police Benevolent Association, the New York Police Department's largest union.

His surprising allegation traveled across Twitter and quickly landed in the lap of Garcia, who swatted it away.

"I haven't talked to the PBA at all. So I don't know what they're talking about," a seemingly bemused Garcia said. "I don't know where that's coming from.