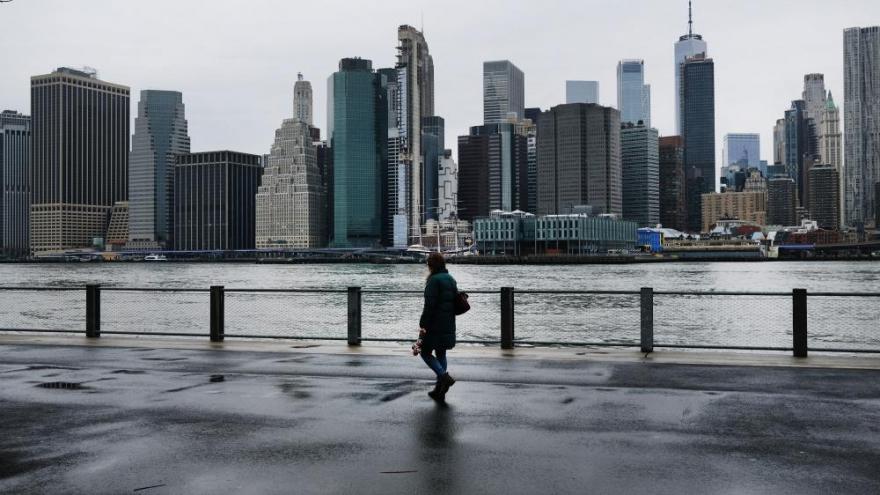 People walk in Brooklyn while lower Manhattan looms in the background on March 28, 2020 in New York City, NY. Gov. Andrew Cuomo called for "all hands on deck" to help stop the virus. He extended his order for all non-essential New York workers to stay home until April 15.

(CNN) -- The mammoth fight against coronavirus in New York intensified Sunday as the state grappled with over 59,000 cases and at least 965 deaths.

Gov. Andrew Cuomo called for "all hands on deck" to help stop the virus. He extended his order for all non-essential New York workers to stay home until April 15.

Cuomo said all hospitals need to work together, especially because various parts of the state could reach peaks of cases at different times. And there's a shortage of critical ventilators and hospital beds.

New York City Mayor Bill de Blasio said his city is on track to run out of supplies next weekend.

"We have enough supplies to get to a week from today, with the exception of ventilators," de Blasio said Sunday.

"We're going to need at least several hundred more ventilators very quickly," the mayor said. "We are going to need a reinforcement by Sunday, April 5, in all categories, especially ventilators but in other areas as well. And personnel is becoming more and more the issue."

It's not just New York on the brink of dire shortages. Some hospitals across the country expect to run out of beds within two weeks.

Nationwide, more than 130,000 people have been infected with coronavirus, and at least 2,298 have died.

A bit of good news emerged Sunday when Cuomo said the attorney at the center of the New Rochelle outbreak has been discharged from a hospital and is now back home in the New York City suburb.

Cuomo has called the man "Patient Zero," but the attorney's family has identified him as Lawrence Garbuz.

Garbuz, who worked in Manhattan, tested positive for coronavirus March 2. It's unclear how he contracted Covid-19.

Officials said more than 50 coronavirus cases could be linked to Garbuz, including his wife, son, daughter, a neighbor who drove him to the hospital, another friend, and that friend's family.

The New York Police Department is mourning the deaths of three members who died from coronavirus while the number of cases within force keep rising.

As of Sunday, 730 NYPD officers and 96 civilian employees have tested positive, a law enforcement official said.

Of those 826 total employees infected, 29 are hospitalized, and one is in critical condition, the official said.

The NYPD advises members with underlying conditions who want special accommodations to seek permission to work from home, the official said. The department is advising pregnant staff members to do the same.

On Saturday, the department announced its first death of a detective due to coronavirus

The detective was in his 40s and had underlying health conditions, multiple law enforcement officials said. Shea did not provide details on the officer's health history.

Barr-Brown was a seven-year veteran of the NYPD.

And on Thursday, Dennis C. Dickson, a custodian who worked at police headquarters, became the first member of the NYPD to lose his life to coronavirus.

The police chief lauded Dickson's commitment to the department, noting the 14-year veteran "worked 17 days straight" during Hurricane Sandy in 2012.

"May we never forget the sacrifice of those workers who put themselves in harm's way to keep you and your family safe," Shea said.