New York is now at a 'high' Covid alert level, according to health officials. The mayor says he's not reinstating mask mandates 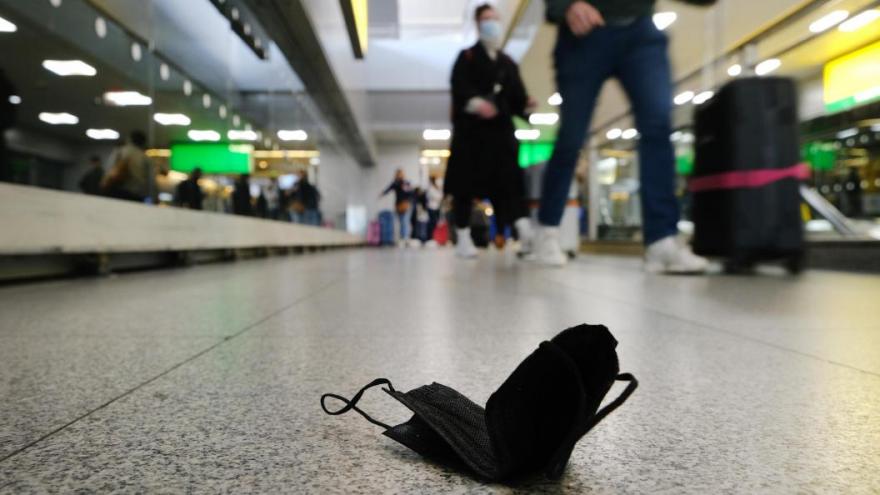 A mask is seen on the ground at John F. Kennedy Airport on April 19 in New York City. As health officials warn of rising Covid-19 infections and hospitalizations, the mayor of New York said the city would not reinstate mask mandates at this time.

(CNN) -- As health officials warn of rising Covid-19 infections and hospitalizations, the mayor of New York said the city would not reinstate mask mandates at this time.

"I'm proud of what we are doing and how we are not allowing Covid to outstmart us," Mayor Eric Adams said during a Wednesday news conference, after he was asked about reinstating a mandate, specifically in the city's schools. "We're staying prepared and not panicking."

To defend his stance, Adams cited what he said were stable hospitalization numbers and deaths across the city, as well as Covid-19 testing in schools.

City officials this week said New York City has reached the "high" Covid-19 alert level, indicating there is a high level of spread in the community and "substantial pressure on the health care system." The city's health department encouraged people to wear high-quality masks in all public, indoor settings and crowded outdoor spaces, regardless of whether vaccination status is known.

New York isn't the only place seeing high infection numbers. About 40% of people in the US northeast are in counties considered to have high community levels, CNN has reported.

What to do if you test positive for Covid-19 now

'An environment of rising risk'

"We're in an environment of rising risk, but we've got all sorts of tools to help keep us safe," including vaccines and boosters, frequent testing and treatments when necessary, he said.

Roughly 78% of city residents are fully vaccinated -- and about 38% of those have received their additional dose, according to a city website.

Much of the city is vaccinated and booster numbers are increasing, the commissioner said, adding, "We have a strong mask culture in this city ... where people are taking those precautions on subways and indoor settings."

"So that's what we're asking New Yorkers to do now, is to just ramp up those activities and take those extra precautions," he said. "We are no longer in an emergency even though we're still in this pandemic."

Vasan said he believes the US is in a "transition" period of the pandemic and that the latest surge pushing infection numbers up again won't last long.

But Vasan said he was concerned about "the impacts of waning immunity" and potential variants going into the fall.

"We are getting geared up for any potential surge in the fall, but it's a little too early to predict. I think we can prepare to have a really nice summer if we just get through this hump. But I am thinking about the fall as well."

Roughly a third of people in the US live in areas with medium or high Covid-19 community levels, CDC Director Dr. Rochelle Walensky said in a White House briefing Wednesday.

"While cases remain much lower than during the Omicron surge this past winter, the current seven-day daily average of cases is now at about 94,000 cases per day, which is an increase nationally of about 26% over the previous week, and a three-fold increase over the last month," Walensky said.

Hospital admissions are also increasing, she added. Deaths have remained low, according to the CDC chief, but the seven-day average of daily deaths is still about 275 per day.