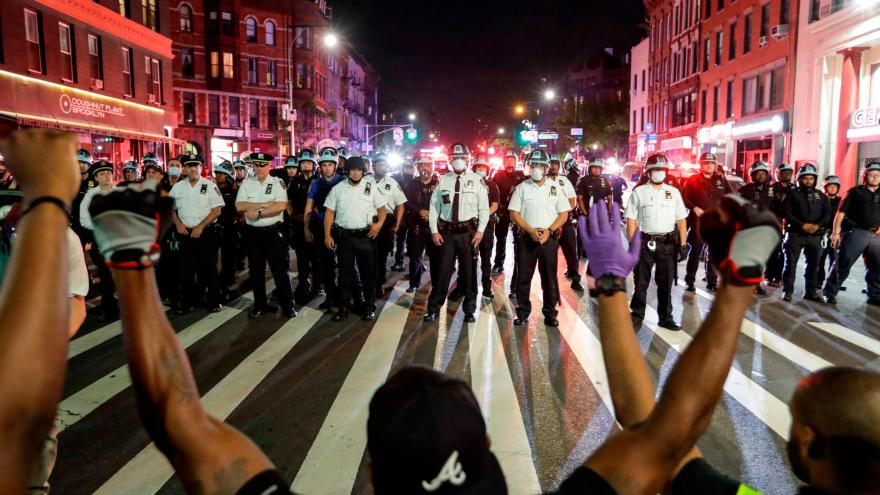 (CNN) -- New York City will move some of its funding from the New York Police Department to youth and social services, Mayor Bill De Blasio said on Sunday.

His announcement comes as discussions grow around the country about defunding police forces, with some activists calling on city officials to invest more of the city's budget in communities, especially marginalized ones where much of the policing occurs.

The news also comes as protests continue nationwide following the death of George Floyd at the hands of police in Minneapolis. The demonstrations have at times been turbulent in New York, with acts of violence both by police and against them.

"These will be the first of many steps my Administration will take over the next 18 months to rebuild a fairer City that profoundly addresses injustice and disparity," de Blasio said in a statement.

The city would only reallocate funding in a way that would ensure the city would still remain safe, de Blasio said at a press conference.

"While we have taken many steps to reform policing in this city, there is clearly more work to do to strengthen trust between officers and the New Yorkers they serve," de Blasio said.

De Blasio said New York City would find "find significant savings in the NYPD budget" that will go toward "youth development and social services for communities of color."

Going forward, the city will move street vendor enforcement out of the NYPD's responsibilities, so they can focus on "the real drivers of crime," the mayor said.

Two NYPD officers have been suspended without pay for their actions in policing protesters and a supervisor of one of them has been reassigned, the mayor said.

The officers who were suspended include one who is accused of shoving a woman to the ground in Brooklyn last Friday, and another who is accused of pulling down a protester's face covering and spraying them with paper spray that day.

A supervisor who was in charge of the officer who shoved the woman has been reassigned, and more reviews are being done, de Blasio said.

Other cities are also taking action

Other cities have also made efforts to defund police.

Minneapolis Mayor Jacob Frey was met by loud boos when he told protesters on Saturday that he did not support disbanding the police department. On Sunday, nine members of the Minneapolis City Council announced they intend to defund and dismantle the city's police department.

Last week, after Californians decried a proposal to increase the Los Angeles Police Department budget to $1.86 billion, Los Angeles Mayor Eric Garcetti agreed to slash between $100 million to $150 million from the proposed funding.

Asked Sunday about recent calls to defund police, New York Gov. Andrew Cuomo said disbanding or stripping entire police departments would lead to even more looting, a problem that New York City has been dealing with during the protests.

"But no police? You get looting," Cuomo said. "That's what you get. Nobody wants that."

Conversations with a task force of city leaders for equity and inclusion prompted him to make the change, the mayor said. The task force also made recommendations for what the NYPD should focus on.