New York Post temporarily deletes, then edits false story that claimed Harris' book was given out in migrant 'welcome kits' 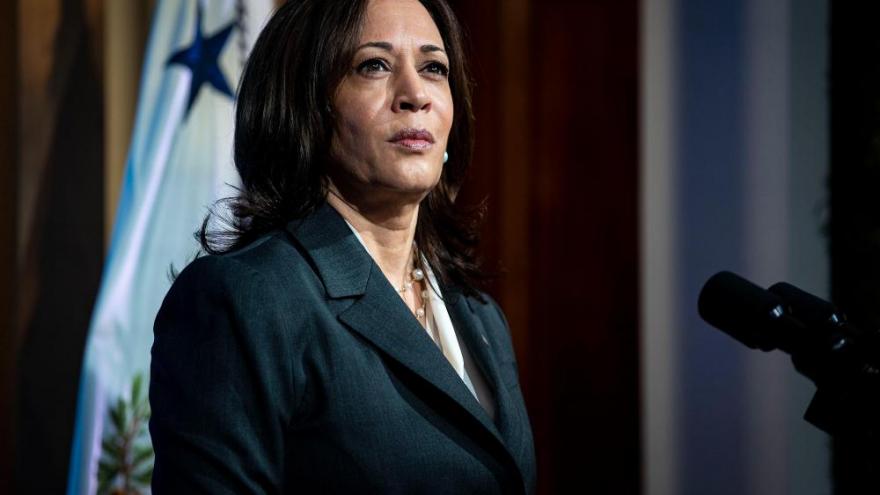 The New York Post temporarily deleted, and then edited and republished, a debunked article that falsely claimed that copies of Vice President Kamala Harris' book were being included in "welcome kits" given to migrant children at a shelter in Long Beach, California. Harris is shown during a virtual Leaders Summit on Climate with 40 world leaders in the East Room of the White House April 22, 2021 in Washington, DC.

(CNN) -- The New York Post temporarily deleted, and then edited and republished, a debunked article that falsely claimed that copies of Vice President Kamala Harris' book were being included in "welcome kits" given to migrant children at a shelter in Long Beach, California.

The reporter who wrote the article, Laura Italiano, tweeted late Tuesday afternoon that she had resigned from the newspaper. Italiano tweeted: "The Kamala Harris story -- an incorrect story I was ordered to write and which I failed to push back hard enough against -- was my breaking point."

The Post newsroom referred questions about Italiano to a public relations representative, who did not immediately respond to a request for a response to Italiano's accusation that she had been "ordered" to write the article.

The Post's major revisions to the article earlier on Tuesday came after the inaccuracies had already spread widely in conservative circles -- and prompted baseless accusations that Harris, whom President Joe Biden has assigned to lead the effort to stem the flow of migrants to the southern border, was personally profiting from the immigration situation.

The Post's Tuesday changes to the article, which was originally published on Friday, followed a Washington Post fact check in which a Long Beach spokesman explained that a community member had donated a single copy of the Harris children's book, "Superheroes Are Everywhere," as part of a book drive -- and that the book would not be handed out in a welcome kits.

The spokesman, Kevin Lee, told the Washington Post and later CNN that neither the federal government nor the city government had purchased copies of the Harris book. Lee told CNN in an email that books will be made available at the shelter in an informal library, not pre-selected for each child's welcome package.

"Children will be able to pick and choose what they read from the available donated inventory. Children also get to pick and choose clothes from a variety of options as well. Having the ability to make personal choices like these are important for them during this challenging time in their lives," Lee said.

The New York Post's claim that copies of the Harris book were being placed in shelter "welcome kits" was repeated or shared by multiple Republican elected officials, echoed by other right-wing news outlets, and used as the basis of a Fox News reporter's question at Monday's White House press briefing.

(Fox News and the New York Post are both owned by members of the Murdoch family.)

The article the New York Post took down and then altered and reposted was the online edition of its Saturday cover story. That cover, which featured the pun "KAM ON IN" in large capital letters, baselessly asserted that copies of Harris' book were being given out "illegally."

The revised version of the article removed the claim that the Harris book was being placed in "welcome kits" and added the fact that the book was donated by a community member. But it still claimed that the presence of the book in the shelter was an "open-arms gesture by the Biden administration," even though there is no evidence the administration had anything to do with it.

The Post attached an "editor's note" at the bottom of the article that said, "The original version of this article said migrant kids were getting Harris' book in a welcome kit, but has been updated to note that only one known copy of the book was given to a child." (In fact, the donation was to the shelter's collection, not given to a particular child.)

The New York Post also temporarily took down and then revised and republished an article about the Fox reporter's exchange with White House Press Secretary Jen Psaki on Monday. That article is headlined, "Psaki has no answers when asked about Harris' book being given to child migrants." The Post inserted a similar editor's note at the bottom.

The New York Post's walk-back was the second time in two days that a right-wing media outlet had to effectively retract a viral claim about the Biden administration. On Monday, Fox News anchor John Roberts acknowledged on air that his show had been inaccurate on Friday when it claimed that Biden is trying to require Americans to eat a maximum of four pounds of red meat per year.

An imaginary scandal based on a single photo

The entire imaginary scandal about the Harris book appeared to begin with a single photograph from a media tour of the Long Beach shelter on Thursday -- though the caption said nothing about the government purchasing the book or about the book being placed in a welcome kit.

The federally operated shelter at the Long Beach Convention Center, which opened on Thursday and is scheduled to operate until August, will house migrant children who arrived unaccompanied at the border with Mexico.

On the media tour, Southern California News Group staff photographer Brittany Murray took a photo of a single copy of the Harris book sitting on a cot along with a backpack and hygiene items. A cot in the background of the shot has two unrelated books on it. Another Murray photo from the media tour shows different books on other cots.

It is unclear why the New York Post decided to claim that something illegal had occurred or to suggest that the Harris book would be included in welcome kits. Murray said in an email that there were no more than five books in the section of the facility they toured, "all different titles/authors," and that the "only mention of books during the tour was a request for book donations from the public."

Nathaniel Percy, a Long Beach Press-Telegram reporter who was on the tour with Murray, said in an email, "I did not see any other copies of Harris' book while on the tour." Percy also said, "I did not see anything suggesting that the children would be receiving any books in welcome kits upon their arrival."

This article has been updated with tweets from reporter Laura Italiano.