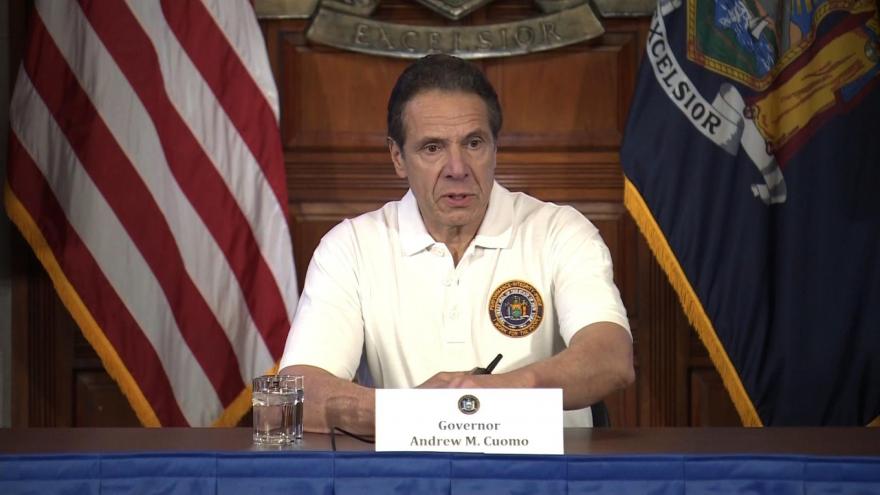 Gov. Andrew Cuomo said during a news conference that New York is sending 1 million N95 respirator masks to New York City as Covid-19 confirmed cases have surpassed 10,300 across the state.

"One million masks won't get us through the crisis, but it will make a significant contribution to New York City's mask issue," Cuomo said. A number of apparel companies in New York are converting to mask manufacturers, and Cuomo said he is exploring the state also manufacturing masks.

Fifty-four percent of New York State cases are of people between 18 and 49 years old.

At least 45,000 people have been tested for Covid-19, and about 15% of those cases are being hospitalized. "The more tests you take, the more positives you find," Cuomo said.

Cuomo tweeted on Saturday that 500,000 masks will go to Long Island and that "we are purchasing 6,000 additional ventilators and gathering supplies from every source we can get."

New York has both a hospital gown and ventilator shortage, Cuomo said, adding that the state has about 6,000 ventilators when it needs about 30,000. Cuomo has said that the ventilators "are to this war what missiles were to World War II."

Officials are working on getting creative and maybe having two people share one ventilator, the New York governor said.

The Democratic governor is touring sites Saturday with the Army Corps of Engineers for alternate hospitals, including the Jacob Javits Convention Center in New York City. These sites would be Army Corps temporary hospitals and include SUNY Stonybrook, SUNY Westbury and Westchester Convention Center.

When asked by a reporter at the news conference Saturday, Cuomo said he has not been tested for the virus because he doesn't want to waste the test and he does not have any of the symptoms. A member of Cuomo's press office tested positive for the coronavirus, his office confirmed to CNN on Friday night.

"A member of our press office felt ill mid-day Thursday and immediately isolated themselves," Secretary to the Governor Melissa DeRosa said in a statement. "This staffer was tested for COVID-19 this morning and that test has come back positive. While none of the other members of the press office are demonstrating COVID-19 symptoms, those who worked in and around the staffer's work station have been placed in precautionary quarantine."

The staffer did not interact with Cuomo, a source with knowledge of the situation told CNN.

Cuomo announced Friday morning that all workers in nonessential businesses across the state are required to stay home in an effort to combat the spread of coronavirus.

Cuomo insisted he wasn't issuing a "shelter in place" order, which he said referred to active shooter situations, but rather the state was "closing the valve" of everyday life to limit the outbreak. He urged New Yorkers to "remain indoors to the greatest extent."

Civil fines and mandatory closures for businesses that don't comply with the new mandate will be enforced beginning on Sunday, he announced.