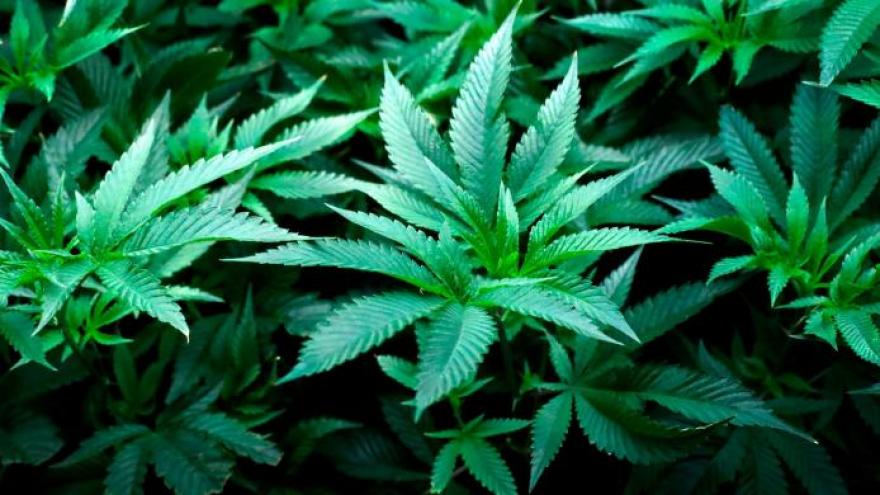 This photo from Tuesday Jan. 14, 2020, shows cannabis growing at Revolution Global's cannabis cultivation center in Delavan, Ill. New York has failed in recent years to pass marijuana legalization, but a state senator said lawmakers have reached an agreement to legalize marijuana sales to adults over the age of 21.

(CNN) -- New York state leaders announced an agreement on legislation that would legalize marijuana across the state -- a move they say would create jobs and bring in millions in tax dollars.

The development of an adult-use cannabis industry in New York has the potential to create 30,000 to 60,000 jobs and the ability to earn $350 million annually in tax collections, his office said.

"Legalizing adult-use cannabis isn't just about creating a new market that will provide jobs and benefit the economy -- it's also about justice for long-marginalized communities and ensuring those who've been unfairly penalized in the past will now get a chance to benefit. I look forward to signing this legislation into law," Cuomo said.

The Legal Aid Society issued a statement Sunday in support of the announcement.

"This landmark legislation brings justice to New York State by ending prohibition, expunging conviction records that have curtailed the opportunities of countless predominately young Black and Latinx New Yorkers, and delivers economic justice to ensure that communities who have suffered the brunt of aggressive and disparate marijuana enforcement are first in line to reap the economic gain," Anne Oredeko, supervising attorney of the Racial Justice Unit, and Anthony Posada, supervising attorney of the Community Justice Unit at The Legal Aid Society, said in a statement.

The taxes would go to the New York state cannabis revenue fund, with the remainder after costs being split between education (40%), the Community Grants Reinvestment Fund (40%) and the Drug Treatment and Public Education Fund (20%).

The Office of Cannabis Management would be an independent office operating as part of the New York State Liquor Authority. It would have a two-tier licensing structure that would separate growers and processors from those owning retail stores, the release says.

"A social and economic equity program would facilitate individuals disproportionally impacted by cannabis enforcement, including creating a goal of 50% of licenses to go to a minority or woman owned business enterprise, or distressed farmers or service-disabled veterans to encourage participation in the industry," the release says.

"Cities, towns, and villages may opt-out of allowing adult-use cannabis retail dispensaries or on-site consumption licenses by passing a local law by December 31, 2021 or nine months after the effective date of the legislation. They cannot opt-out of adult-use legalization," it says.

Several states have looked to loosen restrictions on marijuana. Voters in all five states with marijuana legalization on the ballot in November approved the measures, CNN reported last year.

New York's bill follows marijuana legalization in neighboring New Jersey. Last month, New Jersey Gov. Phil Murphy signed bills to legalize and regulate marijuana use for those 21 and older, decriminalize possession of limited amounts of marijuana and clarify marijuana and cannabis use and possession penalties for those younger than 21.

It came after a 2020 ballot measure that saw New Jersey vote to legalize recreational marijuana. State lawmakers, unable to gain enough support to pass a bill to fully legalize marijuana, agreed to place the question directly to voters: "Do you approve amending the Constitution to legalize a controlled form of marijuana called 'cannabis'?"

South Dakota approved legalization for both recreational and medical use -- the first state ever to approve medical and recreational marijuana measures at the same time -- and Mississippi voted to legalize medical marijuana, becoming one of the first southern states to do so.