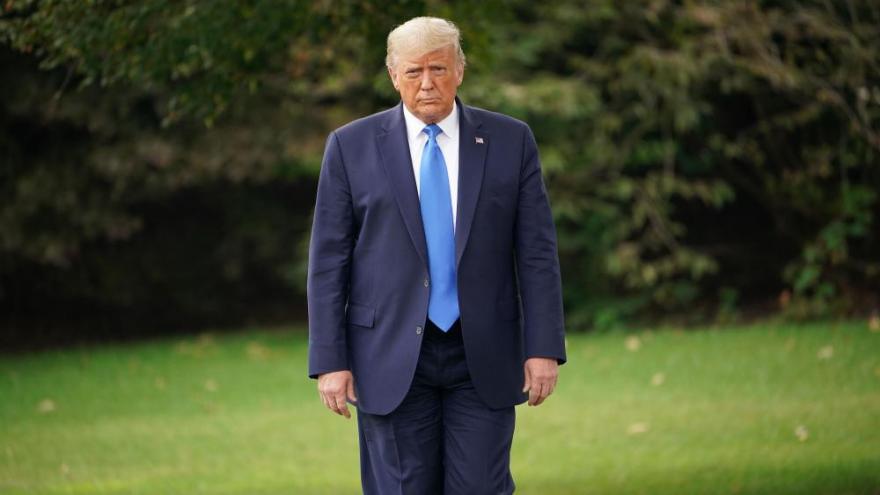 US President Donald Trump denied the New York Times story and said he pays "a lot" in federal income taxes.

(CNN) -- Donald Trump paid no federal income taxes whatsoever in 10 out of 15 years beginning in 2000 because he reported losing significantly more than he made, according to an explosive report released Sunday by the New York Times.

In both the year he won the presidency and his first year in the White House, Trump paid just $750 in federal income taxes, the Times reported.

Detailing payments gleaned from more than two decades of tax information, the Times report outlines extensive financial losses and years of tax avoidance that deal a blow to the business-tycoon brand Trump has built his political career on.

At a White House briefing Sunday, Trump denied the New York Times story and claimed that he pays "a lot" in federal income taxes.

Trump added that he is willing to release his tax returns once he is no longer under audit by the Internal Revenue Service, which he said "treats me badly." The President, however, is under no obligation to hold his tax returns while under audit, despite his repeated claims otherwise.

Trump also refused to answer how much he has paid in federal taxes in the briefing and walked out to shouted questions from CNN's Jeremy Diamond on the topic.

The expansive Times report paints a picture of a businessman who was struggling to keep his businesses afloat and was reporting millions in losses even as he was campaigning for President and boasting about his financial success.

According to the newspaper, Trump used the $427.4 million he was paid for "The Apprentice" to fund his other businesses, mostly his golf courses, and was putting more cash into his businesses than he was taking out.

The tax information obtained by the Times also reveals Trump has been fighting the IRS for years over whether losses he claimed should have resulted in a nearly $73 million refund.

In response to a letter summarizing the newspaper's findings, Trump Organization lawyer Alan Garten told the Times that "most, if not all, of the facts appear to be inaccurate" and requested the documents.

The New York Times said it will not make Trump's tax-return data public so as not to jeopardize its sources "who have taken enormous personal risks to help inform the public."

The tax-return data obtained by the newspaper does not include his personal returns for 2018 or 2019.

Trump's taxes have been largely a mystery since he first ran for office.

During the 2016 campaign, the then-candidate broke with presidential election norms and refused to produce his tax returns for public review. They have remained private since he took office.

Being under audit by the IRS does not preclude someone from releasing their tax returns publicly. But that hasn't stopped Trump from using it as a defense against releasing his financial information.

In 2016, Trump released a letter from his tax attorneys that confirmed he was under audit. But the letter also said the IRS finished reviewing Trump's taxes from 2002 through 2008. Trump did not release his tax returns from those years, even though the audits were over.

A previous New York Times investigation published in 2018 reported that Trump had helped "his parents dodge taxes" in the 1990s, including "instances of outright fraud" that allowed him to amass a fortune from them.

Trump received at least $413 million in today's dollars from his father's real estate empire, starting at the age of 3.

The Times reported Sunday that Trump's tax information reveals specific examples of the potential conflicts of interests between the President's business with his position.

The President has collected an additional $5 million a year at Mar-a-Lago since 2015 from new members.

The newspaper reported that in Trump's first two years in office, he has collected $73 million in revenue overseas, with much of that coming from his golf courses but some coming from licensing deals in countries, including the Philippines, India and Turkey.

The Times said all of the information obtained was "provided by sources with legal access to it."

House Ways and Means Committee Chairman Richard Neal, who requested Trump's tax returns in April 2019, said Sunday evening that the Times report reaffirms his commitment to getting those returns.

"Today's report underscores the importance of the Ways and Means Committee's ongoing lawsuit to access Mr. Trump's tax returns and ensure the presidential audit program is functioning effectively, without improper influence," he said.

"I remain confident that the law is on the Committee's side, and that our request meets the standard the Supreme Court set with its July 2020 rulings. Our case is very strong, and we will ultimately prevail."

In the meantime, the report is sure to fuel fresh attacks on the President in the final weeks of the presidential campaign.

"You have in Donald Trump a President who spends his time thinking about how he can work his way out of paying taxes, of meeting the obligation that every other working person in this country meets every year," she said.

"With Joe Biden, you have somebody who has a completely different perspective on what it means to be a working family in this country."

That message was echoed by CNN political commentator and former Ohio Republican Gov. John Kasich, who assessed, "there are people out there -- and I know, I come from blue collar, hardworking -- these folks are scrapping to make a living and they're going to wake up and find out this incredible mogul paid $750."

"I don't care what his excuses are," he said. "It doesn't pass the smell test."

UPDATE: This story has been updated to remove a line cited from the initial New York Times report that the Times subsequently removed.