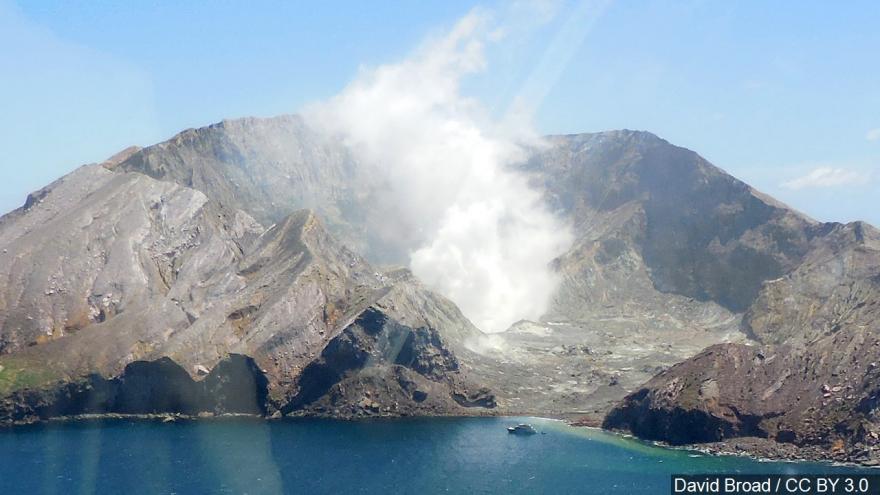 (CNN) -- Eight people are still missing and presumed dead on New Zealand's White Island following a deadly volcanic eruption Monday that spewed hot ash and steam as a large group of tourists were visiting the island.

As of Tuesday morning, police said there had been "no signs of life" from the island during several lengthy aerial reconnaissance flights.

New Zealand's Prime Minister Jacinda Ardern said that citizens from New Zealand, Australia, the United States, the United Kingdom, China and Malaysia were among those injured and missing following the explosion.

Five people were confirmed dead in immediate aftermath of the disaster on Monday. The victims' identities and nationalities are unknown at this stage.

One US tourist, Matthew Urey, was on White Island with his new wife Lauren when the volcano erupted -- one of nine US citizens who was on the island. He left a voicemail for his mother saying he'd been "badly burned."

"Hi Mum, it's me ... the volcano actually erupted while we were on the island," he said in the voicemail which was given to CNN. "If you don't hear from me, we're fine. But my hands are burned so I can't use my phone. And I don't know how long I'll be here."

A New Zealand government bulletin said that while seismic activity had dropped, there was a risk of another, smaller eruption on the island within the next 24 hours. "We are still observing localized steam and mud jetting from the active vent area," duty vulcanologist Geoff Kilgour said.

Morrison said that it was possible, but unconfirmed, that three of the five people killed in the eruption are Australian.

'We had no indication'

The eruption took place on Monday afternoon local time while 47 tourists and tour guides were still touring the volcano, including many visitors from a Royal Caribbean cruise ship, the Ovation of the Seas.

Shocking footage from tourists on nearby boats, posted on social media, showed giant plumes of thick black smoke rising from the site.

Paul Quinn, chairman of White Island Tours, the company that brings tourists to the volcano island, told CNN that the trips took place within the company's guidelines.

"On the morning (the volcanic activity) was level 2, we had no indication of this event occurring," Quinn said. "There was nothing that signaled there was going to be an eruption."

The danger level is measured on a one-to-five scale, with five being the highest.

When the volcano erupted, two of his tour boats were nearby, Quinn said. One boat had docked, and its passengers were on the island. The other boat had departed the island, but turned back to help people on the island.

New Zealand Police Superintendent Bruce Bird said Tuesday that there were still 31 people in hospitals across the country in a range of conditions.

Two of those in hospital are UK citizens, according to the British High Commission. Only three people have so far been treated and discharged.

Speaking at a news conference on Tuesday morning local time, Prime Minister Ardern paid tribute to the people who tried to help visitors caught up in the eruption. "Those who undertook a risky effort in the immediate aftermath did so in an incredibly courageous way," she said.

New Zealand is located in one of the world's most tectonically-volatile regions. Vulcanologists said that while the eruption was relatively small compared to other past disasters, anyone close to the site would have been in serious danger.

Ardern said on Tuesday that ash remained a hazard in the vicinity of the island. A boat coming back from the area was covered in half a meter (around 1.6 feet) of ash.

The White Island, or Whakaari volcano, is New Zealand's most active cone volcano, built up by more than 150,000 years of volcanic activity, according to New Zealand's geological hazard information site, GeoNet.

A cone volcano is the most immediately recognizable mountain-shaped variety, as opposed to shield volcanoes or calderas which are flatter in shape.

White Island is also dubbed as "one of the world's most accessible active volcanoes" on the White Island Tours website.

According to the GeoNet website, more than 10,000 people visit the island every year.