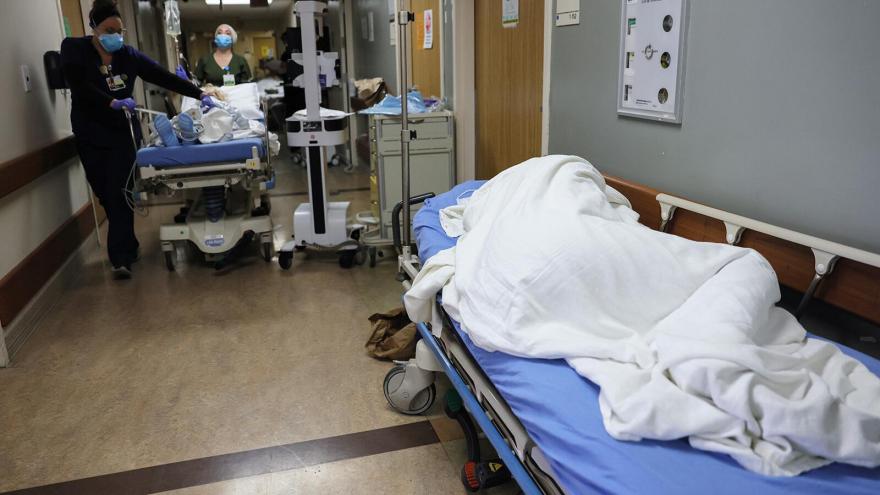 (CNN) -- An African American woman who says her wrists and ankles were shackled by police for hours while she was in active labor at a hospital has settled with the City of New York and its police department.

The woman was arrested two days past her due date in late 2018 on a misdemeanor assault charge that was later dismissed and sealed, her attorneys told CNN. She went into labor the day of her arrest, according to a lawsuit.

She filed the suit against the city of New York and several New York Police Department officers anonymously in October, seeking damages for emotional distress, a violation of her civil rights, punitive damages, attorney fees and costs. In court Wednesday, a US district magistrate judge for the Eastern District of New York approved a $750,000 settlement for the woman and her baby. The settlement stipulates it is not an admission by the defendants that they violated the woman's rights.

The young mother of two told CNN she ended up being forced to give birth handcuffed to a hospital bed with only a nurse holding her hand. She said she was not taken to the hospital where she'd planned to give birth, but instead, to a hospital in a different part of the city, without the presence of the baby's father, her family or the physician she'd been receiving prenatal care from.

The woman spoke to CNN on the condition of anonymity.

"That was not my birth plan. I felt like a failure to my unborn because that wasn't something that was planned for neither of us," she told CNN. "I just didn't feel like myself anymore after that. I feel like my memory got taken away. And still I'm in pain."

The woman was arrested early on December 17, 2018, at her home for a misdemeanor assault that allegedly happened the week before, according to the lawsuit. Her attorneys told CNN she did not, at any time, resist arrest or present a flight risk. The charge was later dismissed, according to her attorneys Anne Oredeko, supervising attorney of the racial justice unit at The Legal Aid Society, and Katherine Rosenfeld.

"The first breath that this baby had on this earth was one born out of violence. That was violence, what the NYPD did to her," Oredeko told CNN. "This lawsuit was meant as a way to give her some type of solace, but there's no repairing that -- money will never repair that. And she cannot get that moment back."

NYPD declined to comment on the settlement. The New York City Law Department did not respond to requests for comment.

The young mother was 40 weeks and two days pregnant when she was arrested, according to the suit.

"The NYPD arresting officers knew that (she) was extremely pregnant, remarking on it to her as they took her into custody," the lawsuit said. "There was no urgent need to arrest (her) that day."

She had already been experiencing contractions for two days, she told CNN. At a Brooklyn precinct the day she was arrested, she had contractions for hours inside a holding cell, with another woman in custody nearby helping her keep track of how far apart they were, according to the suit.

"It was a lady next to me in the next cell. She was talking to me the whole time, she was hearing me in pain. She kept timing it for me," the woman told CNN. "But everybody was at a Christmas party and nobody was to be found -- to the point of where I basically got attention (only) on the next shift. That really made me feel like they didn't care."

She told CNN she was in so much pain that she couldn't stand. According to the suit, when she told a female officer she needed medical care, the officer allegedly told her to lie down on a holding cell bench and remove her pants and undergarments so she could conduct an "inspection." The officer then inspected the woman's "vaginal area," according to the suit.

"I felt disgusted ... because I'm in a dirty jail cell and an officer says I need to lay on something so she could look in my private area to see if my baby is coming," the woman told CNN.

The woman was shackled to a gurney just before midnight on December 17 and taken in an ambulance to a hospital, the suit says. She had medical exams performed on her while shackled and was taken to the delivery room, where she was again put in handcuffs, despite at least one nurse asking for them to be removed, the suit says.

An officer claimed he could not remove the restraints because of an unspecified policy, according to the suit. CNN has reached out to the NYPD and the New York City Law Department for more details on any such policy.

"He finally agreed to remove them after nurses informed him that (she) needed to begin pushing and that the handcuffs were preventing her from receiving an epidural," the suit said.

The woman's baby boy was born at 6 a.m. on December 18. Just an hour later, the woman was handcuffed again, and she struggled to breastfeed her baby while in restraints, according to the suit.

The suit also claims both the mother and her baby had fevers immediately after she gave birth, and that he was taken to the neonatal intensive care unit because of distress and jaundice.

"My only support was the nurse that was helping me," she told CNN. "Nobody -- not my family, not my friends -- just complete strangers."

The mother's restraints were permanently removed December 19 after she had a video arraignment, and she and her son were discharged the next day, according to the suit.

Months after the ordeal, the misdemeanor assault charge that brought her into custody was dismissed and sealed, her attorneys told CNN.

Illegal to shackle women in labor, with exceptions

What happened to the mother has happened before, according to her attorneys. In fact, another mother said in a lawsuit that she was shackled by the NYPD while in labor just months earlier -- in February 2018.

As part of that woman's settlement, the city paid the woman $610,000 and promised to reform its NYPD Patrol Guide.

CNN reported in 2019 that as part of that case's settlement, the NYPD did not assume any wrongdoing, and a spokeswoman said the department intended to amend its patrol guide "to better address safety and medical concerns" of arrestees in late stages of pregnancy and through childbirth, NYPD Det. Sophia Mason said in a statement at the time.

"At the same time, the NYPD will balance these needs with the safety of patients, medical staff, police officers, and others charged with the care and custody of all prisoners," Mason said.

Since that case was settled, the NYPD Patrol Guide directs officers to restrain pregnant women "in the least restrictive manner possible," and that a person who has been detained and is in labor should not be handcuffed or restrained, but may only be restrained after delivery under "exceptional circumstances," according to a copy of a section of the NYPD Patrol Guide dealing with hospitalized prisoners that was issued on July 1, 2020.

The NYPD declined to comment when asked by CNN whether the Patrol Guide directives were still in effect.

"A pregnant prisoner in labor shall not be handcuffed or restrained in any manner, and will only be handcuffed or restrained post-delivery upon the existence of exceptional circumstances," the guidance states. "Exceptional circumstances regarding the appropriate level of restraint will be determined by the immediate supervisor on a case by case basis."

Restraining any pregnant woman has been illegal in the state of New York since 2015, when an existing law was amended to cover all pregnant women, including an eight-week postpartum period.

The law prohibits the use of "restraints of any kind" on a pregnant woman who is "in labor, admitted to a hospital, institution or clinic for delivery, or recovering after giving birth." But the law allows for exceptions if law enforcement "in consultation with the chief medical officer" determines restraints "are necessary to prevent such woman from injuring herself or medical or correctional personnel."

CNN asked state Sen. Brad Hoylman, who co-sponsored the 2015 amendment to the law barring pregnant women from being restrained, whether the NYPD's guidance on restraining pregnant women was in line with the state law.

"The NYPD Patrol Guide does not explicitly spell out a process for consulting with medical professionals before restraining a pregnant person and that certainly can be problematic," Hoylman said in a statement to CNN. "Our intent with S.983-A was to protect pregnant New Yorkers, during and after labor, from the cruelty of shackles and restraints when in custody. I certainly hope NYPD leadership follows this law and its intent when making these decisions."

Dr. Carolyn Sufrin, an OB-GYN and researcher who has worked in the field of reproductive health for incarcerated women and said she gave written testimony in the lawsuit that was settled Wednesday, said laws that provide exceptions and allow some women to be shackled during childbirth make it difficult to provide emergency care if problems arise during delivery.

"It's always a negotiation," Sufrin told CNN. "We don't have time to negotiate with the guard to say, 'You need to remove these restraints now.' If a (baby's) shoulder gets stuck and we need to do emergency maneuvers that require the woman to move, we can't do that if she's shackled."