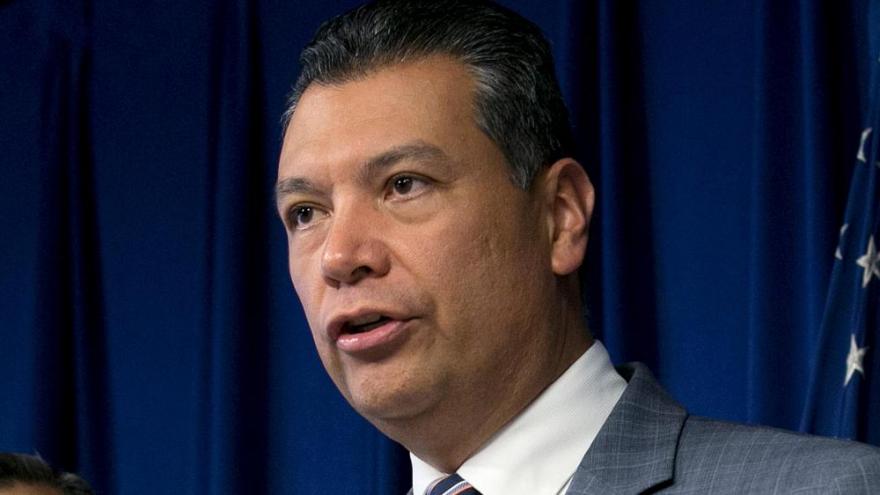 In this Sept. 5, 2017 file photo is California Secretary of State Alex Padilla during a news conference in Sacramento, Calif. The Trump campaign and Republican Party have sued California over a new law requiring presidential candidates to release their tax returns. Padilla, been named as a defendant in the two lawsuits, filed Tuesday, Aug. 6, 2019. The suits argue the law is unconstitutional.

"His appointment will make history. But the @AlexPadilla4CA I know is far more interested in changing history -- especially for the working men and women of our state and country," Newsom tweeted Tuesday. "I can think of no one better to represent the state of California as our next United States Senator."

Newsom extended the offer to Padilla in a video conversation that he released in his tweet. After the two spoke of Padilla's parents who had immigrated to the US, Padilla got choked up as he said he would "absolutely" accept the position.

"I'm honored, man, and I'm humbled, because of them," Padilla says.

Padilla, 47, got his start as an aide to Democratic Sen. Dianne Feinstein of California before serving as Los Angeles City Council president and state senator. Padilla, who has served as secretary of state since 2015, was in charge of the unprecedented task of sending mail-in ballots to over 22 million registered voters, leading to record turnout this year.

A range of federal, state and local officials appeared to be in the mix for the appointment, including Reps. Karen Bass, Barbara Lee and Katie Porter, Long Beach Mayor Robert Garcia, state Senate President pro Tempore Toni Atkins and Lt. Gov. Eleni Kounalakis. The California Legislative Black Caucus and other groups pushed for Bass and Lee to replace Harris, noting that once she left the Senate there would be no other Black women in the chamber next year.

Padilla, a Massachusetts Institute of Technology mechanical engineering graduate whose parents emigrated from Mexico, had many backers for the pick, including the Congressional Hispanic Caucus' BOLD PAC and Feinstein.

In a recent interview, Padilla told CNN that the state's first Latino senator would be "a historic milestone," and said that California's "rich diversity" is surely "one of the many considerations the governor is pondering as he makes this decision."

"A lot of people are excited about a potential first," he said.

Padilla told CNN that he was well prepared to serve in the Senate after dealing with the L.A. budget after 9/11, chairing a state Senate committee on energy and telecommunications, and securing the integrity of the ballot box in the middle of a pandemic.

His long relationship with the governor may have helped.

The decision comes at a pivotal moment for Newsom, as he confronts health, economic, housing and climate crises, as well as his own political future. Both the California governor and Padilla will be up for election.