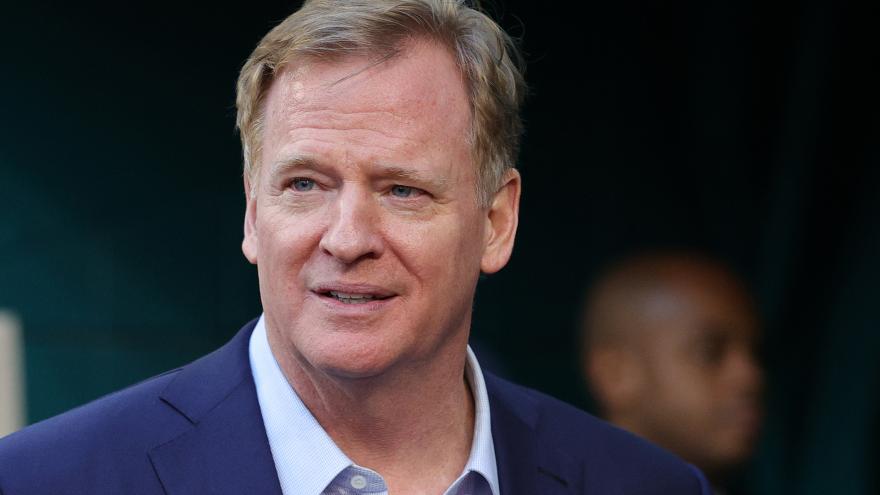 (CNN) -- NFL Commissioner Roger Goodell said Friday the league should have listened to players earlier about racism concerns in response to NFL players calling on the league to condemn racism and support its black players.

Goodell posted a video to the NFL's social media on Friday in response to the video "Stronger Together," which features multiple black NFL players asking the league to take a strong stance in the wake of George Floyd's death.

Notably, Goodell did not mention former San Francisco 49ers quarterback Colin Kaepernick, who faced a backlash from the league and others for kneeling before games while the National Anthem played to protest police brutality.

No team has offered Kaepernick a contract since 2017, which many attribute to his protests. Kaepernick accused NFL team owners of colluding to keep him from being signed. The NFL denied any collusion but in 2019, they reached a settlement with Kaepernick and former teammate Eric Reid, who knelt with him.

Goodell said he will be reaching out to players and others who have spoken out on these issues to see "how we can improve and go forward for a better and more united NFL family." It's unclear if that includes Kaepernick. CNN has reached out to Kaepernick for comment.

Reaction to statement was swift

However, Nessa Diab, Kaepernick's partner and radio DJ in New York, responded to Goodell on Twitter: "And you, @nflcommimsh, STILL have @Kaepernick7 blackballed for peacefully protesting."

One of the players who appeared in the "Stronger Together" video, New Orleans Saints star Michael Thomas, wrote on Twitter, "Well said Roger."

Sports analyst and USA Today columnist Christine Brennan told CNN's Anderson Cooper that she's known Goodell a long time and believes he's being sincere in his message. But Brennan noted the lack of an apology to Kaepernick.

"There are things he cares about," she said. "People criticize him all the time but can see him watching what's going on, listening to his players, like he said, 'if there are no black players, there is no National Football League.' He knows that and means it. Would have loved to see him apologize to Colin Kaepernick or say something about Kaepernick. Maybe that's another day. But NFL has gone out in a big way and I'm sure one of their biggest fans, Donald Trump, is not happy about it."

"What a lot of people have said all day since this video has come out is Roger Goodell should have mentioned Colin Kaepernick by name. And they haven't done that," Stallworth said. "And I think that is the thing that a lot of people still don't trust the NFL's words because their actions have shown and proven otherwise that they don't support the NFL players..."

President Trump railed against Kaepernick and other protesting players in 2017 and called on the NFL to take punitive measures against them. In 2018, the President praised NFL team owners for requiring players to stand during the National Anthem.

Rapper and actor Ice Cube offered a succinct reaction by tweeting a photo of Kaepernick with the caption, "NFL: Do The Right Thing by this man."

Goodell did note that it has been a difficult time for the country, in particular black Americans, and offered his condolences to the families of Floyd, Breonna Taylor, Ahmaud Arbery, and "all the families who have endured police brutality."

"Without black players there would be no National Football League," Goodell said. "And the protests around the country are emblematic of the centuries of silence inequality and oppression of black players, coaches, fans and staff."

Goodell's response comes after a nearly year-long partnership with Jay-Z's Roc Nation. The partnership established The Responsibility Program, an initiative providing education grants to families that have been affected by injustices through the United States. The program has created multiple public service announcements which have been released one of which featured Meek Mill and the Dreamchasers.

A spokesperson for the NFL's Inspire Change program told CNN that a Legacy Grant Program was recently launched and that three grants have already been given to families of victims of police brutality: Botham Jean, Antwon Rose II and Danroy "DJ" Henry.

Goodell's video also follows comments from New Orleans Saints quarterback Drew Brees, who said earlier this week he would "never agree with anybody disrespecting the flag." Brees made the comment when asked his opinion about players kneeling to protest police brutality once the NFL season begins this fall.

He has since apologized for his "insensitive" comments after receiving criticism from his own teammates and other athletes.