NFL didn't ask players to commit to standing for Anthem 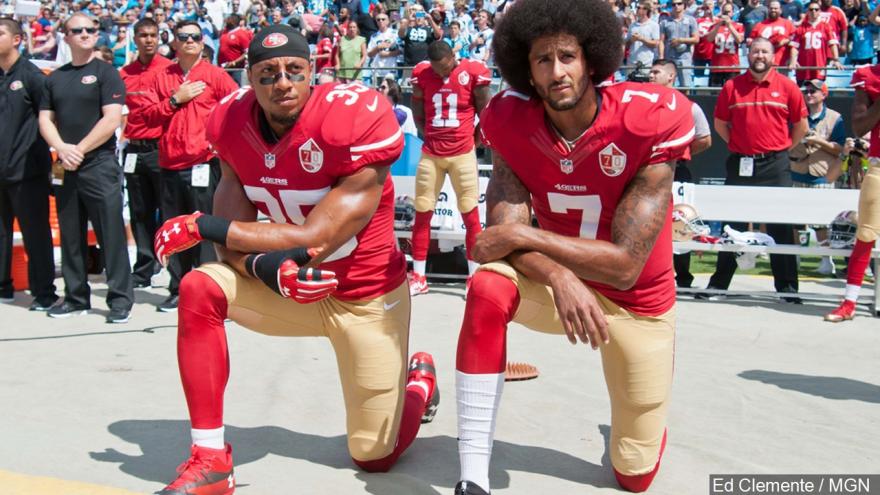 (CNN Money) -- It looks like the NFL won't require players to stand for the National Anthem, and President Trump isn't happy about it.

At a meeting of team owners in New York, Commissioner Roger Goodell said the league hasn't asked players to commit to standing. And a league spokesman said earlier that the NFL was not expected to change its current policy, which says that players should stand, not that they must.

"We did not ask for that," Goodell told reporters on Tuesday. "We spent today talking about the issues that players have been trying to bring attention to -- issues to make our communities better."

Last season, then-49ers quarterback Colin Kaepernick began kneeling during the Anthem to protest the treatment of black Americans, particularly by police. Other players soon joined him.

Trump, who has criticized the protesting players and encouraged owners to fire anyone who takes a knee during the Anthem, took further issue with the NFL on Wednesday morning.

He tweeted: "The NFL has decided that it will not force players to stand for the playing of our National Anthem. Total disrespect for our great country!"

Trump has picked fights with the NFL for years. In the 1980s, he owned a team in the USFL, a failed rival league, and pushed an antitrust suit against its much bigger competitor. Four years ago, he attacked rule changes meant to make the game safer.

But his attacks against players protesting during the Anthem have been on a different level. At a campaign rally in September, the president suggested that owners should fire any "son of a bitch" who takes a knee.

Hundreds of players joined the protests. Several owners released statements criticizing the president, and the league promoted the message that it was unified.

Since that attempt at solidarity, the strain hasn't gone away. Dallas Cowboys owner Jerry Jones said any player who "disrespects the flag" will not play.

Last week, Goodell said the league needs to "move past this controversy." He said, "Like many of our fans, we believe that everyone should stand for the National Anthem."

But as owners entered the second day of their fall meetings, they appeared to be focused not on changing the policy but on understanding why players feel the need to protest.

"It's not trying to trade off to get somebody to stand up, you want to make sure that people feel compelled to do what they feel comfortable with," San Francisco 49ers CEO Jed York told reporters on Tuesday.

"Even if you don't agree with what the sort of messaging is of taking a knee, we need to get the messaging away from the detractors that want to sidetrack the issues of social and racial inequality."

York said owners are focused on helping players use their platforms to advance their message.

He said he was against the protest at first because he "didn't understand it." But he said his opinion changed after he met with Kaepernick last season.

"Racial and socioeconomic inequality have existed in this country for way too long," York said.

York said all owners, including Jones, have a much different perspective now that they've met and listened to players. He said he doesn't think any players will be reprimanded for taking a knee.

On Tuesday, Atlanta Falcons owner Arthur Blank said the meetings were "good." After Trump's attack, Blank was one of the owners who locked arms with players during the Anthem.

Blank said he thinks players kneeling is "fine." He said players have "the right to express themselves ... in a respectful way."

Philadelphia Eagles owner Jeffrey Lurie said on Wednesday that the meetings were "all good."

Lurie has said his players have "great respect" for the Anthem and "all it represents." He's also said the the team believes that "in this difficult time of division and conflict, it is more important than ever for football to be a great unifier."

Goodell is expected to speak to the media when the meeting concludes on Wednesday afternoon.

Also Wednesday, James O'Neill, the New York police commissioner, spoke with owners about "ways players and teams can work with law enforcement and some of the issues they are facing."