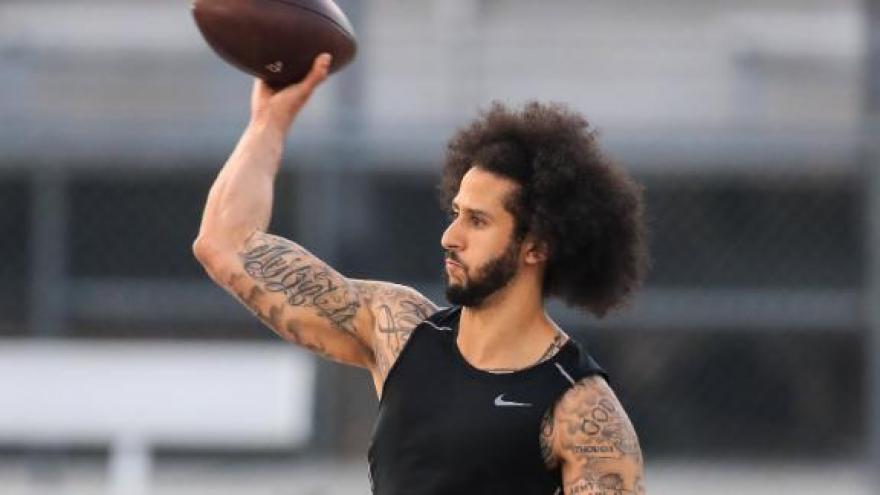 (CNN) -- Colin Kaepernick's much-awaited NFL workout did not go as planned after he abruptly changed the venue at the last minute. The league is accusing him of not showing up for the event.

Instead, he skipped the NFL-sponsored event and held one of his own in Riverdale, south of Atlanta.Afterward, he met with fans who flocked to the new venue and told the league the ball is in its court.

"So we're waiting for the 32 owners, the 32 teams, (Commissioner) Roger Goodell, all of them to stop running," said Kaepernick, who hasn't played in nearly three years following a season in which he protested social injustice by refusing to stand for the National Anthem.

The NFL fires back

In a lengthy statement Saturday evening, the league said it was disappointed by the last minute change of venue. It said it happened half an hour before the start of the event, and more than three-fourths of NFL clubs were planning to attend before the change.

"Twenty-five clubs were present for the workout, and all 32 clubs, their head coaches, general managers and other personnel executives would have received video footage of the interview and workout, shot by the Atlanta Falcons video crew," the NFL said in a statement.

Why he changed the venue

Kaepernick's representatives said he wanted the session to be open to the media and the NFL balked, forcing him to change the venue. His agents also said he'd been told not to bring his own film crew to the previous venue.

"From the outset, Mr. Kaepernick requested a legitimate process and from the outset the NFL league office has not provided one," his reps said in a statement. Kaepernick also indicated he wanted more people to see what had happened at the workout, hence the move.

"Our biggest thing with everything today was making sure we had transparency in what went on. We weren't getting that elsewhere, so we came out here," he said.

His camp also was upset with the liability waiver the NFL wanted the player to sign, saying it was "unusual" and "addresses employment-related issues." They said the NFL rejected the standard waiver they had proposed.

Kaepernick hasn't played in the league since the 2016 season — when he first sat during the playing of the anthem. He has said the protest evolved into kneeling after onetime Seattle Seahawk and Green Beret Nate Boyer persuaded him it would be more respectful to the nation's military.

He said he did so to protest police shootings of African American men and other social injustices faced by black people in the United States.

In 2017, Kaepernick became a free agent but no team offered him a contract. He filed a grievance against the league, accusing team owners of colluding to keep him from being signed. The NFL denied any collusion and they reached a settlement with Kaepernick and former teammate Eric Reid, who knelt with him.