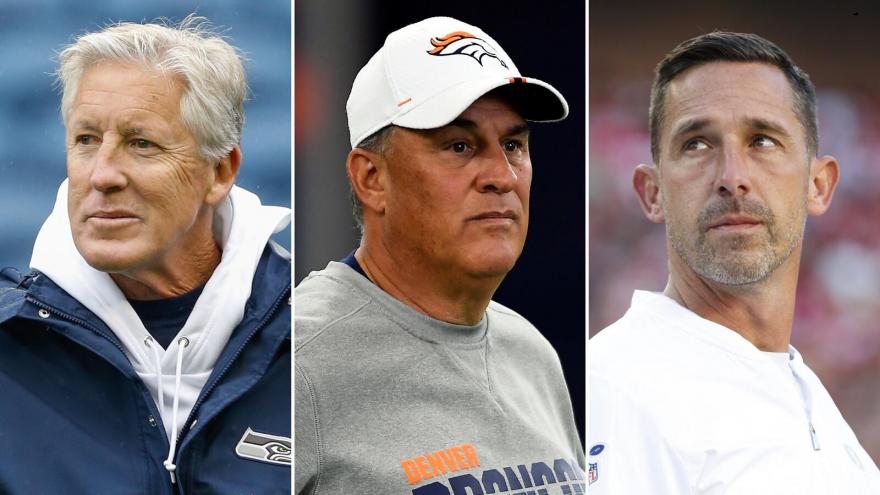 (CNN) -- Three NFL teams are being fined $250,000 each because their coaches were not wearing face coverings during games on Sunday, a league source told CNN Monday.

The teams facing sanctions are the Seattle Seahawks, the Denver Broncos and the San Francisco 49ers.

CNN has reached out to all three teams seeking comment regarding the fines.

A week ago, Troy Vincent, the NFL's executive vice president of football operations, sent a memo to clubs cautioning coaching personnel to wear their masks at all times. In the memo, Vincent said failure to adhere to the protocols in place would lead to sanctions, according to quotes within the memo obtained by CNN from a league source.

The memo came after several NFL coaches were seen not following league protocols for face coverings during the first NFL Sunday since the coronavirus pandemic.

"We must remain vigilant and disciplined in following the processes and protocols put in place by not only the league, union and clubs, but also by state and local governments," Vincent said in the memo. "The NFL-NFLPA Game Day Protocol, which reflects the advice of infectious disease experts, club medical staffs and local and state governmental regulations requires all individuals with bench area access (including coaches and members of the club medical staff) to wear face coverings at all times."

However, during Monday night's game in Las Vegas, both Raiders head coach Jon Gruden and Saints head coach Sean Payton were seen without masks. Payton, in March, was the first NFL figure to publicly acknowledge he had tested positive for coronavirus.

When asked about not wearing his mask in a post game interview, Gruden said he has previously had the virus and would accept the fine if it's ordered.