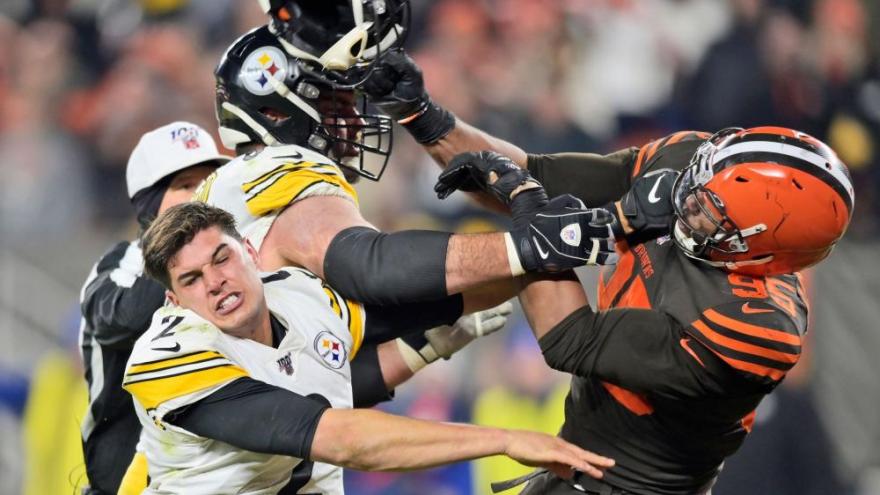 The NFL has suspended Cleveland Browns defensive end Myles Garrett without pay indefinitely -- and at least for the rest of the season -- for the brawl in which he clocked an opponent in the head with a helmet, the NFL said

(CNN) -- The NFL has suspended Cleveland Browns defensive end Myles Garrett indefinitely — and at least for the rest of the season — for ripping the opposing quarterback's helmet off his head and hitting him with it in Thursday night's game with the Pittsburgh Steelers.

Garrett's minimum suspension, announced Friday, puts him out for six regular season games and any playoff games this year. The six games alone would make it one of the longest suspensions for on-field incidents in NFL history.

There are no plans to file charges against Garrett, said Ryan Miday, a spokesman for the Cuyahoga County Prosecutor's Office.

"This would come from the city level and they haven't referred anything to us," Miday told CNN, adding that he did not know whether the incident is under investigation.

Two other players have been suspended for their role in the fight: Pittsburgh's Maurkice Pouncey (three games) and Cleveland's Larry Ogunjobi (one game).

Both teams have been fined $250,000 each. The NFL said it would issue discipline for other players in the coming days, including those who left the sidelines.

The helmet strike, coming at the end of the Browns' 21-7 win over the Steelers in Cleveland, has drawn shock and condemnation from players and sports analysts. Fox commentator Joe Buck, who was covering the game, described the incident as "one of the worst things I've ever seen on a professional sports field."

How the fight happened

The fracas started with seconds left in the game, when Garrett — the former Texas A&M player selected first overall pick in the 2017 draft — took Pittsburgh quarterback Mason Rudolph to the ground after Rudolph completed a meaningless screen pass.

After they tussled on the turf, Garrett pulled off Rudolph's helmet.

Pittsburgh guard David DeCastro pushed Garrett away, and Rudolph got up and chased. Then Garrett swung the helmet onto the former Oklahoma State quarterback's head.

Obviously not pleased, Pouncey punched and kicked Garrett, who had fallen to the ground with DeCastro.

Pouncey, Garrett and Cleveland's Ogunjobi — who pushed Rudolph to the ground from behind — were all ejected from the game.

What the players and the Browns' owners have said

Garrett showed remorse in a statement Friday, saying: "I made a terrible mistake."

"I lost my cool and what I did was selfish and unacceptable," Garrett's statement reads. "I know that we are all responsible for our actions and I can only prove my true character through my actions moving forward.

"I want to apologize to Mason Rudolph, my teammates, our entire organization, our fans and to the NFL. I know I have to be accountable for what happened, learn from my mistake and I fully intend to do so."

Pouncey, explaining his own actions, said after the game that Garrett "could have killed" Rudolph.

"What if he'd hit in him the temple?" the center said.

The Browns' owners, Dee and Jimmy Haslam, apologized Friday to Rudolph and the Steelers.

"We are extremely disappointed in what transpired last evening at the end of our game," the Haslams' statement reads. "There is no place for that in football and that is not reflective of the core values we strive for as an organization.

"We sincerely apologize to Mason Rudolph and the Pittsburgh Steelers. Myles Garrett has been a good teammate and member of our organization and community for the last three years but his actions last night were completely unacceptable. We understand the consequences from the league for his actions."

"I'm not going to back down from any bully out there," the quarterback said in a news conference after the game.

"There are many risks an NFL QB assumes with every snap taken on the field. Being hit on your uncovered head by a helmet being swung by a 275 lb DE is not one of them," Younger said on Twitter. "Tonight could have had a catastrophic ending. The matter will be reviewed thoroughly."

CNN's attempts to reach Younger to ask him whether he and his client were pursuing any further remedy weren't immediately successful.

How this measures up to previous NFL punishments

Garrett's punishment could be considered, depending on how you examine it, the longest suspension levied by the NFL for a single on-field incident.

Earlier this year, Raiders linebacker Vontaze Burfict was suspended for the rest of his season — amounting to 12 regular season games and the playoffs — for a helmet-to-helmet hit on a player on September 29. But the NFL made clear that his previous suspensions and violations of unnecessary roughness rules played a factor in the length of the punishment.

Otherwise, the longest suspension for an in-game violation was held by Albert Haynesworth, suspended five games in 2006 after the then-Tennessee Titan stomped on a player's head.

Garrett was fined previously this season for illegal hits.

All of Friday's suspensions may be appealed under the league's collective bargaining agreement with players.

Assuming Garrett's suspension stands, he would have to meet with the commissioner's office before the league decides on whether to reinstate him after this season, the NFL said.