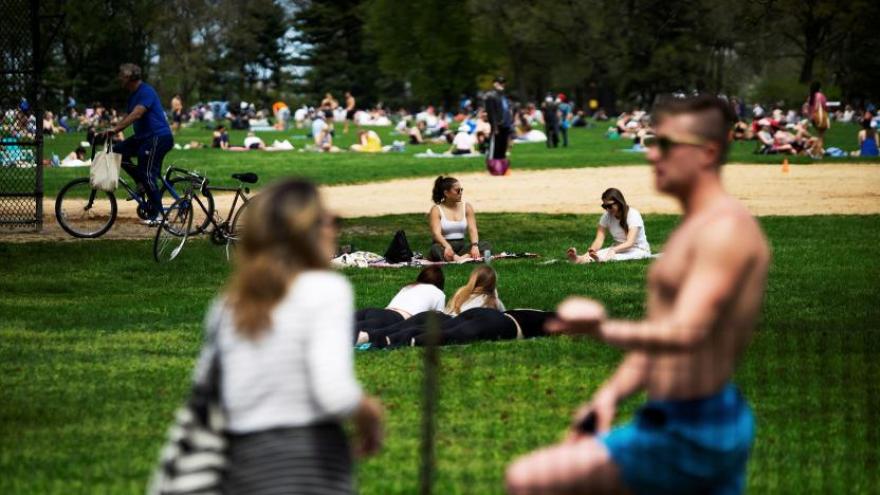 (CNN) -- After weeks being mostly confined indoors, New Yorkers couldn't pass up a chance to enjoy the sunshine in Central Park on Saturday.

As the temperatures rose into the mid-70s, small clusters of people sat on the park's grassy meadows and others ran, jogged or walked through the park.

The city has been at the center of the coronavirus outbreak for weeks and while the number of cases has recently been declining, city officials are still urging people to stay at home.

"We expected this and prepared for this," New York City Mayor Bill de Blasio told CNN's Ana Cabrera on Saturday, adding that police, along with other city agencies, were "out in force."

The New York Police Department had said that more than 1,000 police officers on foot, bikes and in vehicles would be enforcing social distancing during the weekend throughout the city.

The mayor said officers were handing out free face masks and would be issuing summons to those who tried to resist social distancing rules.

"If everyone follows the rules, that's great, but if not -- there's going to be very intense enforcement," he said.

Signs through Central Park reminded visitors how far apart they must remain from other people. Many people at the park wore masks and appeared to be keeping a distance from others.

Charisse Hill, a spokeswoman with the New York City Parks Department, said in a statement that there was "a volume of visitors" on Saturday and most were in compliance with the rules.

City parks have remained open through the pandemic.

De Blasio said enforcement numbers from earlier in the day "looked actually quite good," and said most people seem to have gotten the message.

"New Yorkers have been pretty amazing and following rules in a place where it's tough," he said. "There's so many people in one place and yet New Yorkers are doing their job here."

The New York Police Department did not have information Saturday on whether there were any summons or citations issued in regard to the parks.

The state is still under what Gov. Andrew Cuomo called a "pause" order until at least May 15.

The governor's order restricts nonessential businesses from reopening, bans all gatherings of "individuals of any size for any reason" and recommends that people limit outdoor recreational activities. Cuomo also issued an order requiring people to wear face masks in public.

Some may consider the sight at Central Park as a preview of what cities across the country may see as authorities ease restrictions.

But the city is "not out of the woods," de Blasio said, and is not rushing to reopen yet.

"Of course we all want to restart, but we're not going to restart until we have harder evidence that we've turned the corner," he said.