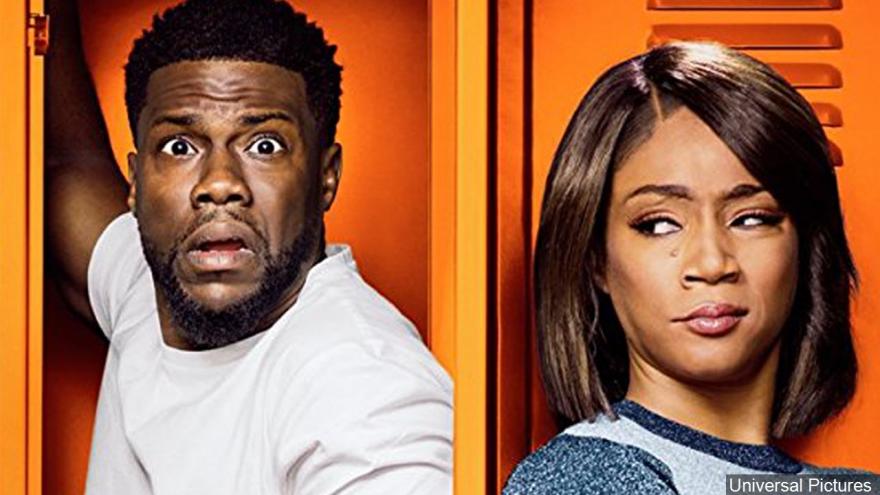 The race for the weekend top spot was, in the end, a laugher. Warner Bros.' animated release "Smallfoot," which cost about $80 million to make, trailed in second with $23 million.

Not since Melissa McCarthy's "The Boss" topped the box office in April 2016 has a comedy that didn't mix other genre elements been No. 1.

The romantic comedy "Crazy Rich Asians" was a huge success, leading the box office for four straight weeks, and Tyler Perry's two horror-comedies — "Boo! A Madea Halloween" and its sequel — both opened at the top.

But big-screen comedy has been in a tailspin for years. It took two of comedy's biggest names teaming up to push Universal's "Night School" to the year's best comedy opening.

"We've been very consistent in this genre," said Jim Orr, distribution chief for Universal. "When you get in business with people like Kevin Hart and Tiffany Haddish who are just on fire, and then really extraordinary filmmakers like (producer) Will Packer, that's how you get good results."

It's the second straight No. 1 for Universal, which last week led ticket sales with the Amblin Entertainment-produced fantasy "The House With a Clock in Its Walls." It earned $12.5 million in its second weekend.

"We have a very diverse approach to our slate," Orr said. "We're not just superhero movies or anything else like that. When you see these kinds of results, you know that that's the right thing to do, that it pays off."

Frights not laughs have become the hotter attraction at the movies, but for one weekend at least, horror and comedy switched roles. Lionsgate's Halloween-themed "Hell Fest" debuted meekly with $5.1 million.

"Over the last few years, comedy has just taken a real roller coaster ride with audiences either not locking into the premise or not vibing with the stars," said Paul Dergarabedian, senior media analyst or comScore. "The quality, or at least the perceived quality of many of the movies, especially the R-rated comedies, has been so bad that time after time people got disenchanted by the genre."

"Night School," in which Hart plays a man who returns to his high school to get his GED certificate (Haddish plays his teacher), fared poorly with critics, earning a 30 percent "fresh" rating on Rotten Tomatoes. But the draw of Hart and Haddish was enough to supersede bad reviews. This is Hart's 11th No. 1 film.

David Lowery's "The Old Man & the Gun," which Robert Redford has said will be his final film as an actor (though he's wavered on that), opened in five theaters, scoring a strong per-screen average of $30,000. Redford plays an aged bank robber in the heist film co-starring Sissy Spacek and Casey Affleck.

And "Free Solo," National Geographic's documentary about rock climber Alex Honnold's ropeless ascent of Yosemite's El Capitan, grossed $300,804 in four theaters. The per-screen average of $75,201, the company said, is the best screen-average opening ever for a documentary.

The "Night School"-led weekend — up 15.5 percent compared with last year — helped Hollywood score the second-best September at the box office. It follows September 2017, when "It" set records. Warner Bros.' horror spinoff "The Nun" was this month's top film.