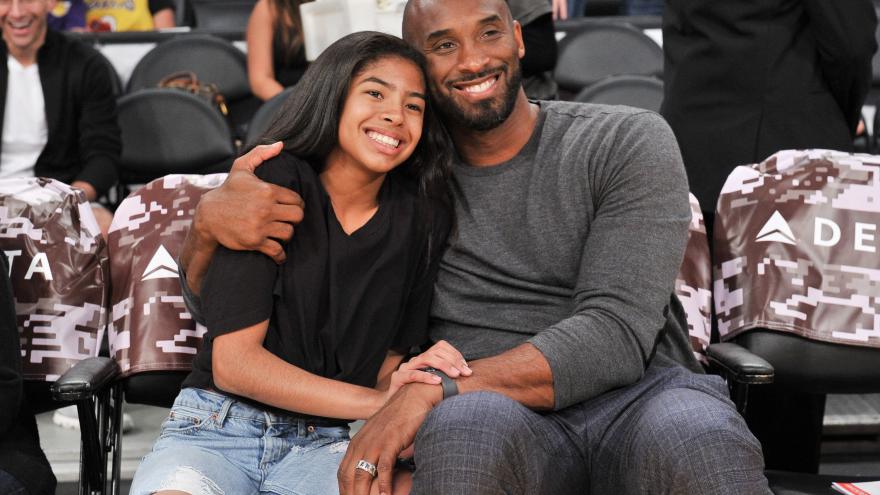 (CNN) -- Sometimes you can say a lot without saying much at all.

Nike released a touching tribute to Kobe Bryant on Monday, released just as the public memorial service honoring Bryant and his daughter Gianna got underway.

The simple yet effective tribute featured no videos or images.

Rather, with various audio clips playing in the background, the video highlighted various achievements spanning across the star's long career: Playing for Lower Merion High School in Pennsylvania, his five championships with the Lakers, his career-high 81 points and more.

It ends on "Mamba Forever."

Bryant, his daughter Gianna and seven others were killed in a tragic helicopter accident on Sunday, January 26.

Vanessa Bryant, wife to Kobe Bryant and mother to Gianna, spoke publicly for the first time at the memorial, eulogizing both with emotional remarks.

"God knew they couldn't be on this earth without each other," Bryant said of the pair. "He had to bring them home to heaven together."

One of Nike's biggest stars

The Nike ad follows a rush to buy Kobe Bryant merchandise in the wake of his death.

In the days following Bryant's shocking death, it seemed that everyone had the same idea: stock up on Mamba gear.

A search for either "Kobe" or "Kobe Bryant" on the retailer's website showed no available goods and redirected fans to a company statement, titled, "In Memory: Kobe Bryant."

"Kobe was one of the greatest athletes of his generation and has had an immeasurable impact on the world of sport and the community of basketball," the statement read. "He was a beloved member of the Nike family. We will miss him greatly. Mamba forever."

Bryant first signed a deal with Nike in 2003. He was one of an elite group of NBA players who signed with the brand that year, including LeBron James and Carmelo Anthony. That helped the shoe company solidify its position in the basketball world for the next couple decades following Michael Jordan's 2003 retirement.

As Bryant's success on the court grew, so too did his Nike partnership. The brand put out multiple lines of Kobe shoes and gear. In 2017, the company brought Bryant on stage with then-CEO Mark Parker at its annual investor meeting to celebrate the launch of Nike's new business strategy.