No answers yet on DACA revival, Justice Department says 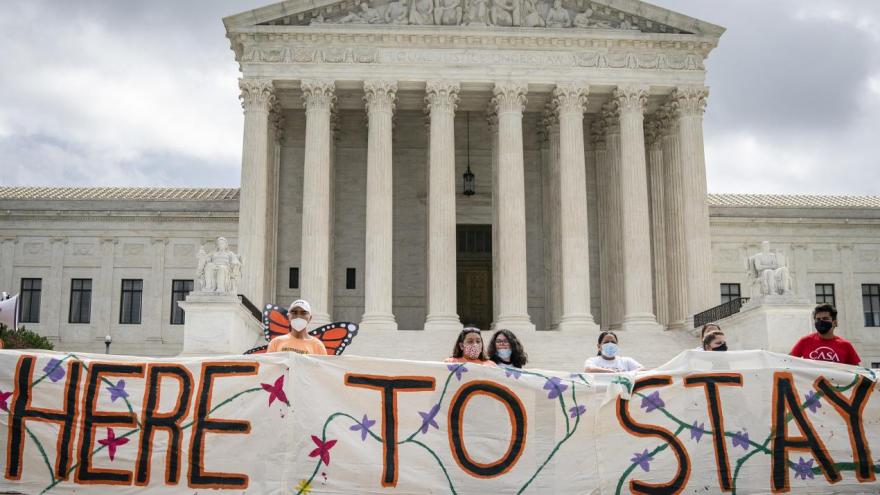 DACA recipients and their supporters rally outside the U.S. Supreme Court on June 18, 2020 in Washington, DC. On Thursday morning, the Supreme Court, in a 5-4 decision, denied the Trump administration's attempt to end DACA, the Deferred Action for Childhood Arrivals program.

(CNN) -- The US Justice Department said Friday that the highest level of the Trump administration is currently giving a "new consideration of the future of the DACA policy" since the recent Supreme Court decision, but it is an "ongoing active policy deliberation" and that no decision has been made.

The Supreme Court blocked the Trump administration's attempt to end Deferred Action for Childhood Arrivals, an Obama-era program that protects some undocumented immigrants who came to the US as children from deportation and allows them to work in the US.

At a hearing held by a federal judge in Maryland, DOJ attorney Stephen Pezzi acknowledged a "regrettable lack of clarity" on the US government website regarding the current status of the program. The lawyer said that new applications are being held -- not rejected -- while the policy is being considered and that the Justice Department is unable to "get ahead" of the Department of Homeland Security.

The hearing was called because lawyers for potential new DACA recipients told the judge that the government was not accepting initial DACA applications even though the Supreme Court has issued its mandate.

The hearing comes as a growing chorus of attorneys and immigrant rights advocates this week accused the government of defying the Supreme Court's order by effectively refusing to accept new DACA applications.

"If they continue to deny these, it's the President saying he won't follow the Supreme Court decision because he doesn't agree with it, and that's a constitutional crisis," attorney Tamara French said.

The notice French received, dated July 3, states that USCIS "is no longer accepting initial requests ... from individuals who have never been granted deferred action under DACA."