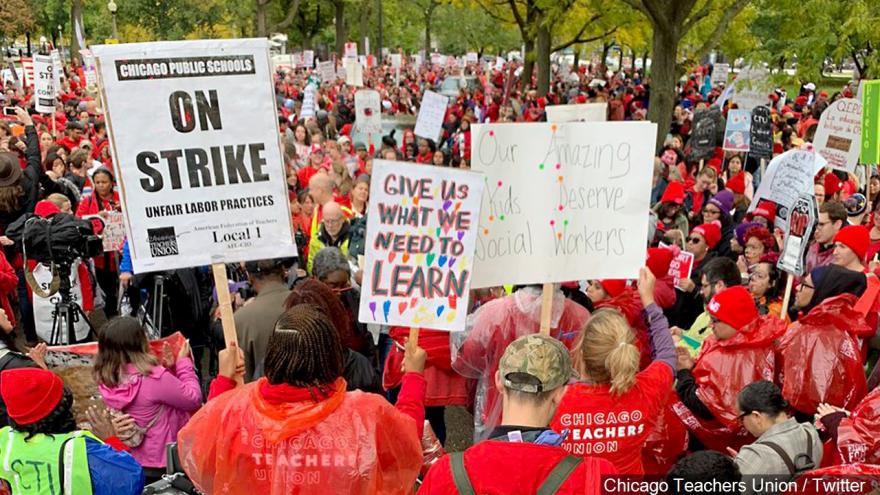 CHICAGO (AP) — Representatives for Chicago teachers and the nation's third-largest school district said early Tuesday that they had failed to reach a settlement to end a strike that has canceled classes for nine days.

Talks were set to resume Tuesday, hours after a 16-hour bargaining session that began Monday morning wrapped up without a tentative agreement.

City officials said they were frustrated to end the day without a resolution to the strike but were encouraged by some progress on teachers' key demands for smaller class sizes and additional staffing in schools.

Both Mayor Lori Lightfoot and district CEO Janice Jackson have said they will not consider shortening the amount of instructional time that students get each day.

A representative for striking Chicago teachers expressed hope following late-night bargaining talks and said the Chicago Teachers Union "has laid out a path for a settlement" that could reopen classrooms.

General Counsel Robert Bloch said early Tuesday that the union representing 25,000 teachers is awaiting the city's response. He says the parties have narrowed their differences, "but we're not there yet."

Classes remained canceled Tuesday for more than 300,000 students as the strike that began Oct. 17 entered its ninth school day. The walkout has surpassed the length of a 2012 teachers' strike.

The district has reached a tentative agreement with a separate union representing thousands of school support staff.