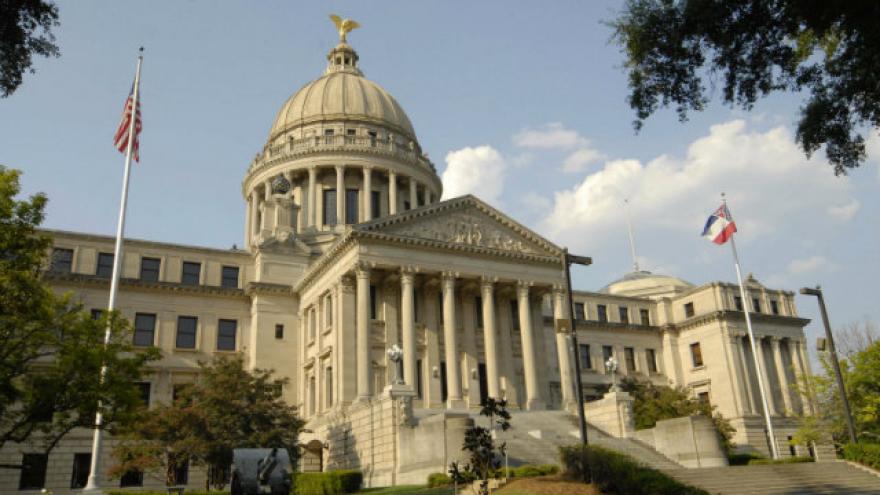 (CNN) -- The Mississippi Department of Public Safety is looking for several suspects believed responsible for placing a pair of nooses and signs on the Mississippi state Capitol grounds Monday morning.

The items were placed the day before a runoff election between Republican incumbent Cindy Hyde-Smith and former Democratic congressman Mike Espy for a US Senate seat. The runoff has drawn attention to the state's history of racist violence.

"We're hanging nooses to remind people that times haven't changed," reads one of the signs.

Authorities released images of the signs on Monday and asked the public for help locating those responsible for what it described as "acts of hate and intimidation."

"Let me be perfectly clear -- there is absolutely no place in our state for these unacceptable symbols or tactics to intimidate others," US Attorney Mike Hurst of Mississippi's Southern District said in a statement.

"If we find evidence beyond a reasonable doubt that a federal crime has occurred, these criminals will be swiftly prosecuted and held accountable. Let us all respond to these despicable acts by voting, working, raising our families, practicing our faith, and pursuing the American dream here in our great state without fear or trepidation and in harmony with our fellow citizens."

The signs include references to Hyde-Smith's comments on the campaign trial about attending a "public hanging." Hyde-Smith accused Democrats of weaponizing the "public hanging" remark and said she would apologize to anyone who was offended by it.

Additionally, CNN's KFile reported over the weekend that Hyde-Smith once promoted a measure that praised a Confederate soldier's effort to "defend his homeland" and pushed a revisionist view of the Civil War.

"We want leaders who give honest apologies and can be humble enough to admit when they're wrong," reads one of the signs.

One sign features the name of lynching victim Emmett Till. Another sign notes that from 1882 to 1968, Mississippi had the highest record of lynchings at 581, a claim that tracks with information from the NAACP's website.

"On Tuesday November 27th thousands of Mississippians will vote for a Senator. We need someone who respects the live of lynch victims," one sign reads.