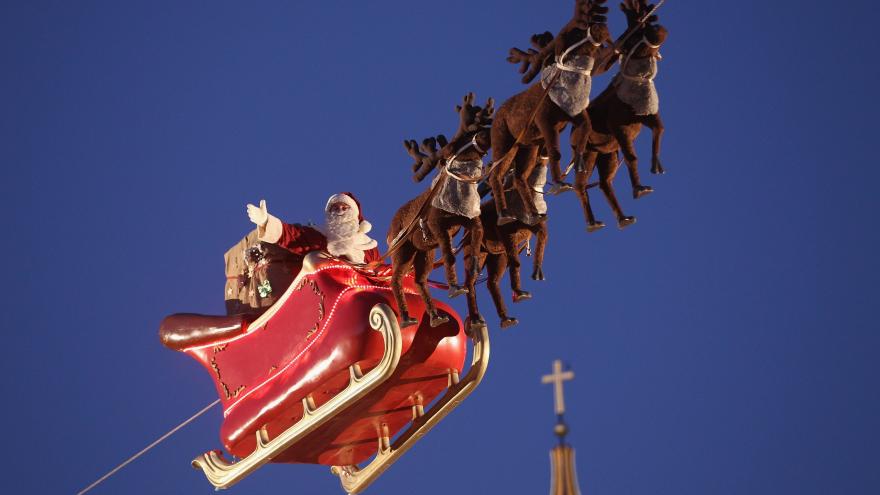 The North American Aerospace Defense Command and its top-notch radar system will tell you when to get your cookies and milk ready for Santa's arrival.

For 63 years, the organization otherwise tasked with detecting aerospace activity has turned its attention to Santa Claus on Christmas Eve -- tracking his sleigh and nine reindeer as they glide through the night to every child's house -- well, the ones he's deemed good for the year.

It's a tough task, but NORAD says they are the "only organization that has the technology, the qualifications and the people to do it."

And even if the federal government has shut down, NORAD announced Friday they'll continue to track Santa's journey. Military personnel and more than 1,500 volunteers will field calls on Santa's location and continue the decades-old tradition.

In 1955, when Colorado-based Sears Roebuck & Co. misprinted a telephone number in an advertisement for kids wishing to talk to Santa, they sent dozens of children calling the Continental Air Defense Command center instead.

Colonel Harry Shoup didn't miss a beat. He and his staff spent the night answering calls and telling hundreds of kids where Santa was flying over during the night - starting a tradition. In 1958, shortly after NORAD was created, they picked it up and have kept it going for decades.

How they know where he is

NORAD's radar system is installed in more than 47 locations across Canada and Alaska. The agency's satellites, more than 22,000 miles above Earth, use infrared sensors to track heat and help the organization track missile launches that may be directed at North America.

But on Santa's big night, NORAD's radar system is on alert for his take off. Once Santa has kicked off his journey from the North Pole, the organization begins using its satellites' infrared detectors to spot Rudolph's bright nose and keep track of the big journey.

To make sure he has a smooth trip, NORAD's jet fighters often escort Santa and his nine reindeer during his time over Canada and the United States.

How you can also track Santa

NORAD's Santa Tracker allows anyone in the world to see where Santa is flying during his journey. But the organization says it never knows when Santa will stop at each house and can only guarantee he'll pay his visit once children are asleep.

He usually starts at the International Date Line in the Pacific Ocean and heads west, NORAD says. His first stops include the South Pacific, New Zealand and Australia. From there, Santa flies up to Japan, through Asia, across Africa, Europe, Canada, the US, Mexico and finally Central and South America.

For those wondering how Santa manages to visit so many countries in one night: "NORAD Intelligence reports indicate that Santa does not experience time the way we do," NORAD says on its website. "His trip seems to take 24 hours to us, but to Santa it might last days, weeks or even months."

One thing the organization won't have the answer to is how the big jolly guy manages to slide down chimneys. NORAD says they're still trying to figure that out.