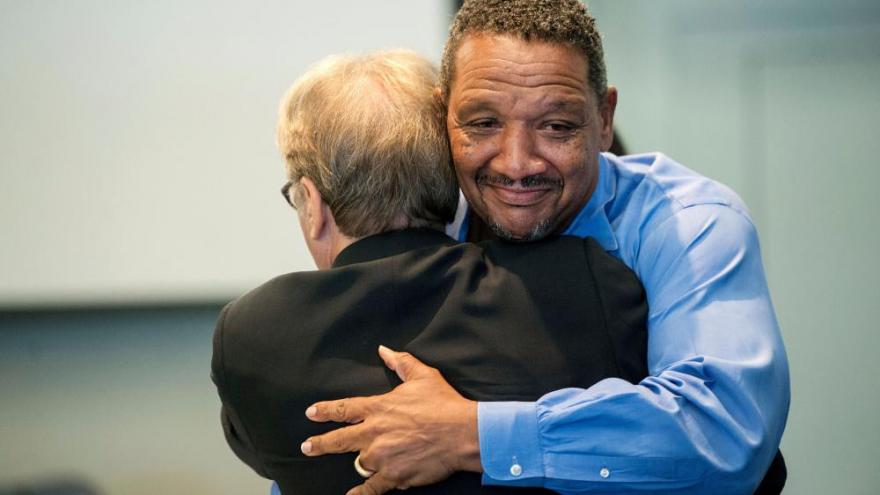 In this Wednesday, Aug. 31, 2016 file photo, Darryl Howard hugs attorney Barry Scheck after a judge threw out a double-murder conviction against him during a hearing at the Durham County Courthouse, in Durham, N.C. North Carolina Gov. Roy Cooper granted a pardon of innocence Friday, April 30, 2021 to Darryl Anthony Howard, a man imprisoned for two decades before his two murder convictions were vacated more than four years ago by a trial judge.

(CNN) -- North Carolina Gov. Roy Cooper on Friday pardoned a man who was wrongly convicted of second-degree murder and first-degree arson in 1995, a news release from the governor's office said.

Darryl Anthony Howard can now file a claim for compensation for the years he spent in prison. In North Carolina, people wrongly convicted of felonies can receive up to $50,000 per year they were in prison, but no more that $750,000.

Amelia Green, an attorney for Howard, said: "We are pleased to have the State acknowledge what has been clear all along -- Darryl Howard never should have spent a moment in prison for these horrifying crimes, let alone over 22 years. Darryl is relieved to have this official recognition of his innocence as he moves forward to the next chapter in his life."

Howard has been a free man since a judge vacated his convictions in 2016.

In 2009, attorneys filed a motion on Howard's behalf requesting the victims' rape kits be DNA tested, the pardon said. According to media reports, Howard's attorneys argued that the DNA found in the kit of one of the victims implicated another man. Howard's DNA was not a match, the News & Observer of Raleigh reported in 2015.

In 2016 a judge in North Carolina ruled the new DNA evidence showed that Howard was innocent.

Days after the judge vacated the convictions, a district attorney announced he would not retry the case, according to media reports.

"It is important to continue our efforts to reform the justice system and to acknowledge wrongful convictions," the governor said in his statement.