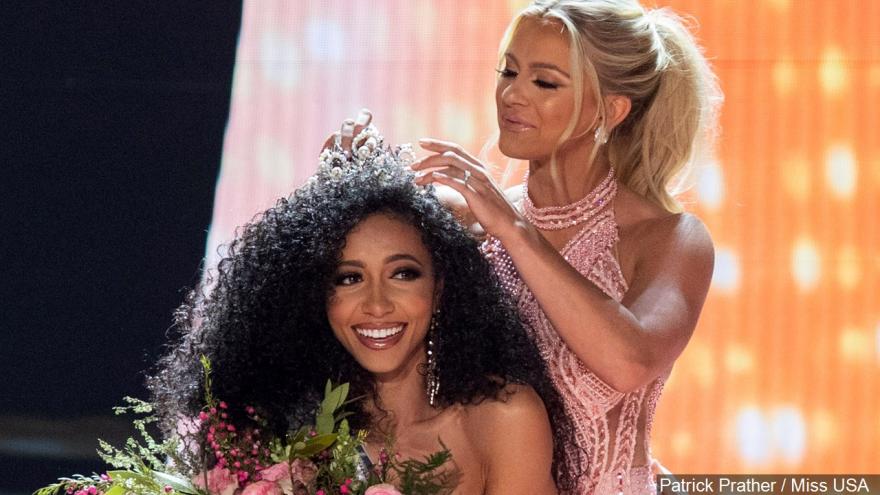 RENO, Nev. (AP) — A 27-year-old lawyer from North Carolina who represents prison inmates for free won the Miss USA title Thursday night, describing herself as a "weird kid" with a "unibrow" who's now part of the first generation of truly empowered women.

Asked in the final round to use one word to summarize her generation, Cheslie Kryst of Charlotte said "innovative."

"I'm standing here in Nevada, in the state that has the first female majority legislature in the entire country," she said at the event held for the first time in Reno. "Mine is the first generation to have that forward-looking mindset that has inclusivity, diversity, strength and empowered women. I'm looking forward to continued progress in my generation."

New Mexico's Alejandra Gonzalez, the first runner-up, and Oklahoma's Triana Browne, the second runner-up, helped highlight the diversity of the competition on stage as the three finalists along with Kryst, who is African American.

Browne said she's a proud member of the Chickasaw Nation whose father is white and mother is African American. She's in a partnership with Nike to promote a brand that celebrates Native American heritage. Gonzalez, whose mother immigrated to the United States from Mexico, founded a nonprofit that teaches children the importance of being literate.

Nevada's Tianna Tuamoheloa, who made it to the final five, was the first woman of Samoan descent to compete in the event that dates to 1952. Savannah Skidmore, a former state basketball champion from Arkansas who has a second-degree black belt in Taekwondo and is pursuing a law degree, also made the final five.

Kryst and Gonzalez faced each other holding hands during the moments before the winner was announced, then embraced with the news.

Kryst said she didn't feel nervous as she advanced through the elimination rounds.

"I just kept hearing my name get called," she said. As she waited for the winner to be announced, "All I could think was, 'This is really cool.' "

Kryst earned a law degree and an MBA at Wake Forest University before becoming a civil litigation attorney who does pro bono work to reduce sentences for inmates. In a videotaped message played during the two-hour event at a hotel-casino, she told a story of when a judge at a legal competition told her to wear a skirt instead of pants because judges prefer skirts.

"Glass ceilings can be broken wearing either a skirt or pants," Kryst said.

She told reporters afterward she'll never forget being in law school at Wake Forest participating in a moot court competition in Louisiana with a panel of judges who provided very little feedback to here and her partner.

"We stood there for 30 minutes after practicing for months and all you said was wear a skirt next time?" she said. "It was very frustrating. Don't tell females to wear different clothes while you give the men substantive feedback on their legal arguments."

Kryst who advances to the Miss Universe competition, was crowned by 2018 Miss USA Sarah Rose Summers of Nebraska. She said her interest in pageants began when she was 10 years old, watching her mother ride a horse-drawn carriage in a parade when she was named Mrs. North Carolina in 2002.

"It was a time in my life when I didn't' know who I was and wasn't confident in myself. I was that little weird kid who had a unibrow and didn't have any friends. My hair was always pulled back. I thought I want to be just like her," she said.

Kryst went on to compete in pageants in high school.

"I can't say pageants make you beautiful. I think they make your more confident in the person that you are," she said.

"I'm still that same weird kid. I still like reading books. And at the end of the day, I like to sit by myself in my house and just watch movies. But I think pageants taught me all that, and my mom was really the one who introduced me to that and drew me to pageantry."