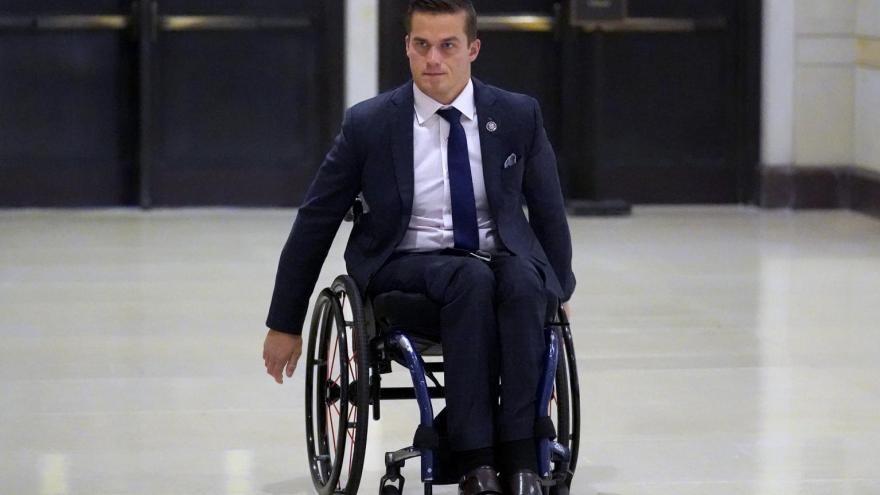 Rep. Madison Cawthorn is shown here on Capitol Hill in Washington on April 20, 2021.

(CNN) -- North Carolina Rep. Madison Cawthorn is facing a charge of driving with a revoked license for the second time since 2017.

The Class 3 misdemeanor charge, which could carry a maximum penalty of up to 20 days in jail, is one of three pending traffic citations against the Republican congressman in his home state.

The charge was first reported by the Asheville Citizen-Times.

According to North Carolina Highway Patrol spokesperson Marcus Bethea, at 10:26 p.m. on March 3, a trooper pulled over "a 2019 Toyota for a left of center violation on US 74B in Cleveland County."

Bethea said that after determining Cawthorn's license "was in a state of revoke," the driver was charged and given a court date of May 6.

Court records show a previous charge against Cawthorn of driving while license revoked in 2017 was dismissed in Buncombe County.

According to Bethea and court calendars, the 26-year-old congressman also faces two additional charges of speeding issued by the NCHP in separate incidents in different counties.

On October 18, 2021, according to a synopsis provided by Bethea, Cawthorn was pulled over in Buncombe County in a 2009 white Dodge for "driving 89 mph in a 65-mph zone." Court records list his court date for that violation as May 3.

And on January 8, 2022, the congressman was pulled over in a 2009 Dodge by state highway patrol in Polk County. Bethea told CNN that Cawthorn was cited for "driving 87 mph in a 70-mph zone." He has an April 18 court date.

Luke Ball, Cawthorn's communications director, told CNN in a statement: "Our office expects the traffic matters to be resolved quickly and we remain focused on serving the constituents of NC-11."

In North Carolina, a license can be revoked for several reasons, including moving violations while license is suspended, speeding and accumulation of points, among other violations. It is not known why Cawthorn's license was revoked. Driver license histories are confidential under federal privacy law.

Correction: A previous version of this story misrepresented the time period in which one of the citations occurred. Cawthorn was pulled over on January 8, 2022.