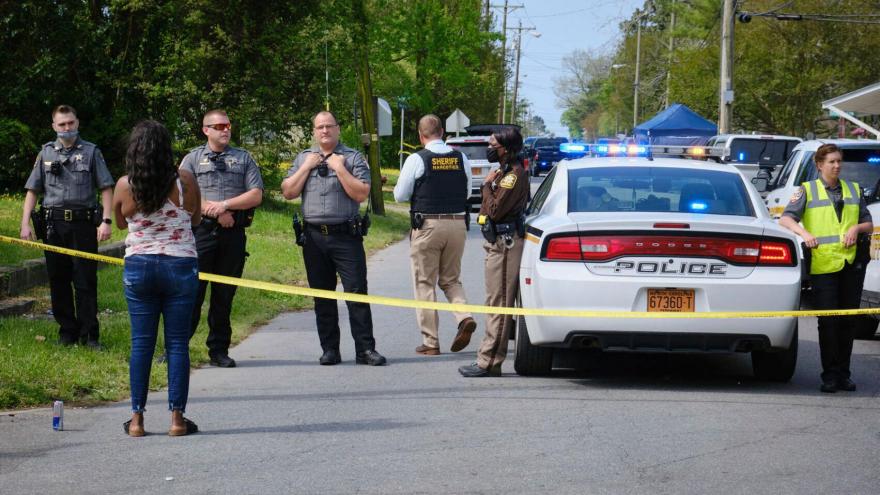 Law enforcement officers watch as a woman records the scene on her cell phone.

"Only a judge can release the video," Wooten said in a video message posted on Facebook. "That's why I've asked the North Carolina State Bureau of Investigation to confirm for me that the releasing of the video will not undermine their investigation."

Once he gets that confirmation, the sheriff said the county will file a motion in court, "hopefully Monday," to have that footage released. His announcement followed calls from Elizabeth City leaders for the footage to be released.

Brown, a 42-year-old Black man, was shot and killed Wednesday by Pasquotank County sheriff's deputies when they attempted to serve him with an arrest warrant in Elizabeth City, North Carolina, the sheriff's office said.

Few details have been released about the shooting, but the sheriff previously said "many" body cameras were worn. According to dispatch audio from that day, first responders can be heard saying a man was hit and had gunshot wounds to the back.

Brown's family met with Wooten on Friday and thought they would be shown the body camera footage. But that didn't happen, they told CNN.

Instead, they said that Wooten told them he would not show them the video until the investigation was completed.

What they were told, said Brown's aunt, Betty Banks, was that authorities did not find any drugs or weapons in Brown's car or in his house. The warrant that was being served on Brown when he was shot was related to felony drug charges, Chief Deputy Daniel Fogg said.

"It's clear to us there is something bad on that body cam video," civil rights attorney Benjamin Crump, who is representing Brown's family, told CNN on Saturday. "Transparency is essential."

He added that Brown's children and family were what "drove him as a person."

"And now I got to live every day, my newborn without even get a chance to meet him at all," Ferebee said. "And that's gonna hurt me every day. I just want justice."

The sheriff did not disclose how many shots were fired.

In the sheriff's office video message posted to Facebook Saturday, Fogg said they have asked the North Carolina Sheriffs' Association to appoint an outside sheriff's office to conduct an internal affairs investigation of everyone involved in the incident.

"The focus on the internal affairs review will be to see if any disciplinary actions need to be taken," Fogg said. "We will fully cooperate with the work of the outside investigator and we will hopefully begin that process immediately."

A 'microcosm' of what's happening across US

The shooting comes while protests have broken out in different parts of the country in response to other fatal police shootings of people of color.

"Elizabeth City is a microcosm now of what is going on across the nation," Mayor Bettie Parker said during a news conference on Saturday. "I see now that no city, small or large, is exempt."

"So we are ready to do whatever we need to do to supplement what we're already doing to make sure nothing like this happens again," Parker said.

Parker said no one from the Elizabeth City Police Department was involved in serving the arrest warrant, search warrant or the shooting on Wednesday.

She added that city leaders have reached out to county officials and wanted to give them a chance to "have control of the narrative because it was not our department that was involved."

In an emergency meeting on Friday, the Elizabeth City Council voted unanimously to request the release of body cam footage of the shooting.