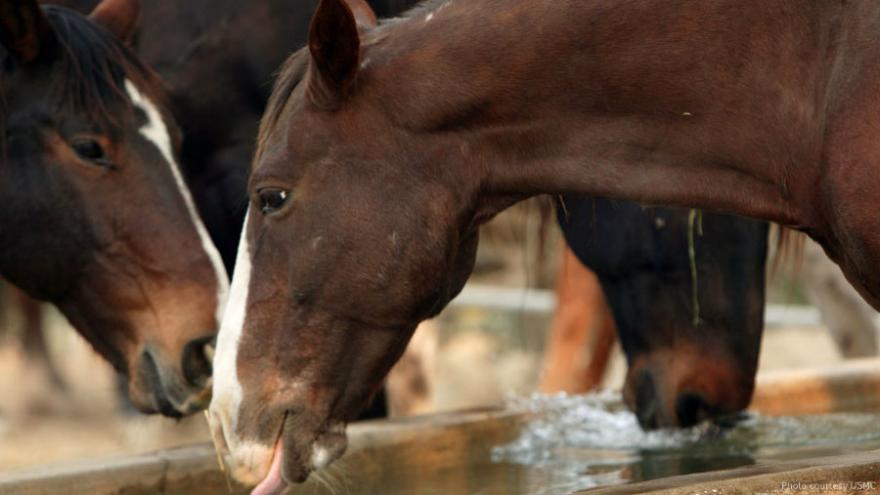 For many vacationers on North Carolina's Outer Banks, a trip there is not complete without at least catching a glimpse of the majestic wild horses that roam the islands. As Hurricane Florence approaches, many are expressing concern about how the horses will fare during the powerful Category 4 storm.

The Facebook page of the Corolla Wild Horse Fund was peppered with comments from worried tourists and residents.

"Thinking of all of the horses as Florence approaches. ... Praying for their safety," wrote one concerned woman.

"Prayers for protection from the storm for these beautiful animals & the young foals," wrote another.

Wildlife experts say they needn't worry. Wild horses are believed to have first settled on the Outer Banks hundreds of years ago and have survived many powerful storms.

Sue Stuska, a wildlife biologist based at Cape Lookout National Seashore, where 118 wild horses live on Shackleford Banks, said the horses are highly sensitive to weather changes and instinctively know what to do in a storm. She said they go to higher ground during flooding, including the dunes, and head for shrub thickets and a maritime forest during high winds.

"Don't worry about them. They've survived for hundreds of years, and we expect that they'll be just fine."

The Corolla Wild Horse Fund, a group devoted to protecting and managing a herd of wild Colonial Spanish Mustangs that roams on the northernmost Currituck Outer Banks, posted a message on its Facebook page Monday to reassure horse lovers that they expect the animals will be just fine.

"The horses have lived on this barrier island for 500 years, and they are well equipped to deal with rough weather," the group wrote.

"They know where to go to stay high and dry and are probably in better shape right now than most of us humans who are scrambling with final preparations. They are much better off without any help from us; anything we might do in the hopes of 'protecting' them would probably end up being more dangerous and stressful for them than the storm."

Horse deaths during storms are not unheard of, however.

John Taggart, an associate professor emeritus who teaches environmental science at the University of North Carolina at Wilmington, said five wild horses drowned after they were swept off the Rachel Carson Reserve near Beaufort, North Carolina, during Hurricane Isabel in 2003. But that kind of loss is unusual during storms, Taggart said.

"They do have an instinct for protection, of trying to head for higher ground, getting out of the wind and then sticking together in a group," he said.