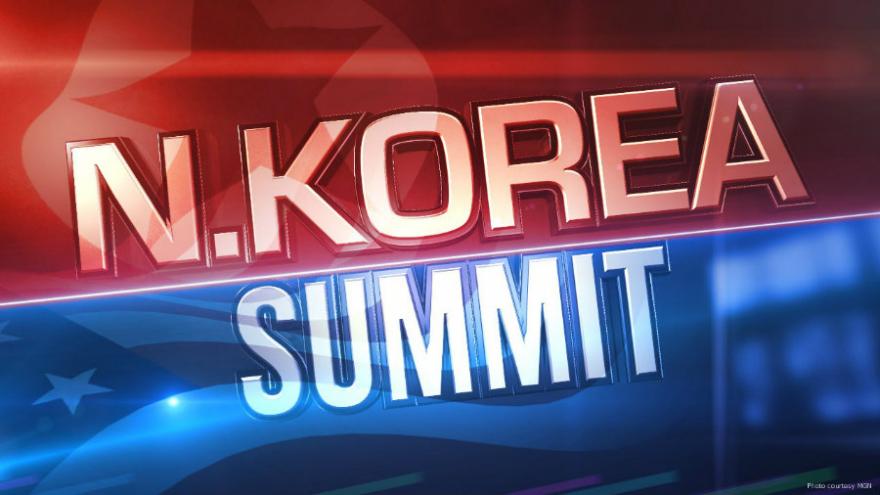 (CNN) -- North Korea says Kim Jong Un is still willing to meet Donald Trump "at any time," despite the US President's abrupt cancellation of what would have been a historic summit between the two leaders, scheduled for June 12.

"We would like to make known to the US side once again that we have the intent to sit with the US side to solve problem(s) regardless of ways at any time," said Kim in comments published by the country's state-run news agency KCNA Friday.

Kim said Trump's decision is "not consistent with the desire of humankind for peace and stability in the world, to say nothing of those in the Korean Peninsula."

President Trump canceled the summit Thursday in a letter addressed to Kim Jong Un, citing recent hostile comments from top North Korean officials and concern over Pyongyang's commitment to giving up its nuclear weapons. Trump said it would be "inappropriate" to have the summit given his worries.

The final straw, US officials said, was a statement Thursday from North Korea's Foreign Ministry calling US Vice President Mike Pence a "political dummy" and hinting that Pyongyang was ready for a "nuclear showdown" should diplomacy fail.

But despite President Trump's abrupt cancellation, he appeared to leave the door open for talks to resume at some point, telling reporters

With the summit now off, US allies and other stakeholders in the region were left scrambling to figure out their next steps.

South Korean President Moon Jae-in, who acted as a middleman between Trump and Kim, called an emergency meeting in the middle of the night after the White House went public with the cancellation.

Moon's Foreign Minister Kang Kyung-wha spoke with US Secretary of State Mike Pompeo early Friday about President Trump's sudden decision and the next steps for Washington and Seoul, two longtime allies. According to a South Korean statement, they said both sides should "devote effort to save the dialogue opportunity."

The US' other key partner in the region, Japan, was always more skeptical about what could be achieved at the summit. Prime Minister Shinzo Abe is among the more hawkish leaders in Asia when it comes to North Korea. His chief spokesman said Friday that the US and its allies must continue the campaign to isolate North Korea diplomatically and pressure it using economic sanctions.

China has always been key to that strategy, as it accounts for nearly 90% of North Korea's imports, at least on the record.

Beijing hasn't responded to Trump's decision to cancel the summit, but some experts say that China may be less willing to enforce tough sanctions if it believes that Washington isn't committed to pursuing diplomacy alongside sanctions.

The two countries have traded insults in the past with Trump calling Kim "little rocket man" and a "sick puppy," and North Korean state media referring to the US President as a "dotard." But in recent months, as relations improved, they've moderated their language with respect to their leaders.

Even after the talks were canceled, North Korean foreign ministry official Kim Kye Gwan complimented the US President on his willingness to take a risk and meet with Kim Jong Un.

"We have inwardly highly appreciated President Trump for having made the bold decision, which any other US presidents dared not, and made efforts for such a crucial event as the summit," Kim Kye Gwan said in Friday's statement.

"We remain unchanged in our goal and will to do everything we could for peace and stability of the Korean Peninsula and humankind, and we, broad-minded and open all the time, have the willingness to offer the US side time and opportunity."

Hours before Trump canceled the summit, Pyongyang held a ceremonial dismantlement of its Punggye-ri nuclear test site which it has billed as an example of its "commitment to building a nuclear free peaceful world," as one North Korean official at the site put it.

Kim Jong Un announced last month that the site would be shuttered, as it has served its purpose and North Korea's nuclear weapons program was advanced enough that it no longer needed to set off nukes undergorund.

International journalists, including a crew from CNN, watched as a series of explosions appeared to destroy three of four tunnels at the site -- the North Koreans said the fourth tunnel, used for the country's first nuclear test in 2006, had already been destroyed.

Though there were no nuclear or nonproliferation experts on the trip to verify if the site was actually rendered unusable --something the White House said that North Koreans promised them -- the decision to invite foreigners to watch North Korea blow up the tunnels at one of the country's most secretive sites holds symbolic importance.

The CNN team spent about nine hours at the site, during which they were briefed by the deputy director of North Korea's Nuclear Weapons Institute -- who declined to give his name to the visiting journalists -- and allowed to inspect the tunnels.

"The dismantling of the nuclear test ground conducted with high level of transparency has clearly attested once again to the proactive and peace-loving efforts of the government of the DPRK (Democratic People's Republic of Korea)," the official from North Korea's nuclear weapons institute said.

Both sides had high hopes for what would have been a historic summit between the two leaders after Trump unexpectedly accepted an offer from Kim for face-to-face talks in early March.

It would have been the first encounter between a sitting US President and North Korean leader but plans began to unravel after North Korea objected to joint US-South Korean military drills and comments from senior members of the Trump administration.

After a successful summit between Moon and Kim, a pledge from the young North Korean leader to shutter his nuclear test site and refrain from launching missiles, and the decision to free three Americans held in North Korea, things seemed to be proceeding well until Pyongyang's shift in tone last week.

Butsome analysts believe that Pyongyang's recent provocative language wasn't meant to push Washington to cancel the meeting, but rather to voice their displeasure after Vice President Pence and Bolton,Trump's national security adviser, brought up the case of Libya when discussing North Korea.

Former Libyan leader Moammar Gadhafi agreed to give up his nuclear weapons but less than a decade later was ousted from power and killed with the help of NATO-backed forces.

North Korea has long cited Libya as an example to show why it needs nuclear weapons to deter the United States.

"They were trying to signal to Washington that they were very displeased about all this talk about Libya, which is obviously a nightmare scenario for North Korea, said Sue Mi Terry, a senior fellow at the Center for Strategic and International Studies and former CIA analyst.

"I think that message didn't come across to Washington ... the North Koreans were trying to send a signal and something was lost in translation."