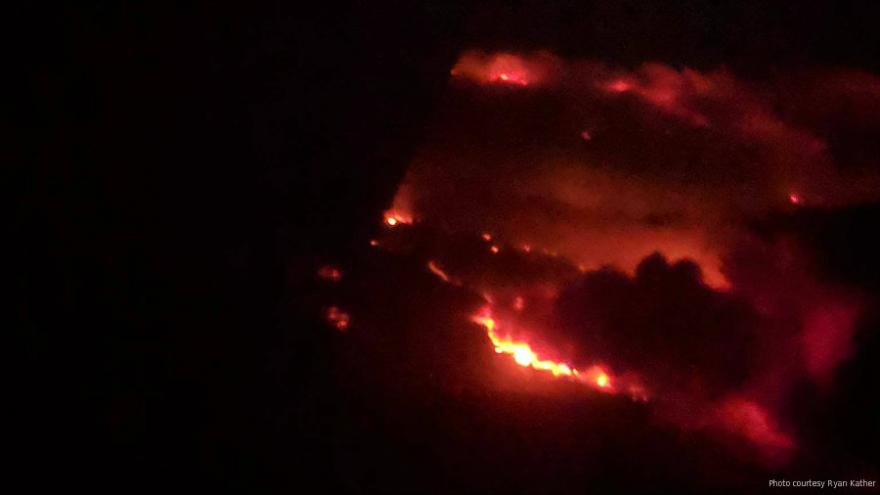 The fire kept growing Tuesday, though firefighters got some reprieve as winds died down.

Winds Tuesday weren't as brisk, something forecasters said should be the case for the next few days. There is no rain in the forecast, though, until possibly Thanksgiving.

The area is getting ravaged by the Woolsey Fire, which has already charred more than 150 square miles -- an area larger than the size of Denver -- and destroyed 435 structures.

So far, two people in Malibu have died from the Woolsey Fire.

"We are not out of the woods yet," Ventura County Fire Chief Mark Lorenzen said. "We still have incredibly tough conditions ahead of us."

The National Weather Service office in Los Angeles said there were wind gusts of up to 33 mph in the fire areas.

The tragedy is even worse in Northern California, where the Camp Fire has left 42 people dead. It's now the deadliest and most destructive wildfire in the state's history.

But there's a shred of good news in Butte County, which has been largely annihilated by the Camp Fire. Winds had died down Tuesday, giving exhausted firefighters -- including some who lost their own homes -- a better chance of getting a grip on the blaze.

There was also some relief in areas where people had evacuated from the Woolsey Fire. About 11 areas were reopened to residents.

While the Camp Fire is still out of control, some residents returned to what's left of their gutted homes.

Justin Bartek lost his childhood home in Paradise, where his father still lived. His sister's house was burned down as well.

Bartek said he's especially concerned about his father, who's retired.

"His world is pretty much flipped upside down," Bartek said Tuesday. "My mother's ashes were left in the home. That's tough to deal with as well."

Paradise resident Nichole Jolly said she thought her life was over when flames surrounded her car, filling it with smoke. Then, she called her husband, who urged her to run, she said.

"If you're going to die, die fighting," she said, tearfully recalling his words.

Outside the vehicle, ash and hot embers stung her eyes and obscured her vision, she said. She felt around until she reached a fire engine that was hot to the touch. Firefighters pulled her inside, but they, too, were trapped, she said -- until a bulldozer came through and cleared a path to safety.

• Camp Fire: More than 15,500 structures are still threatened by the Camp Fire, which has scorched 125,000 acres of Northern California. That's bigger than the size of Atlanta. The Camp Fire has also destroyed more than 6,500 homes and 260 commercial buildings. As of Tuesday morning, the inferno was 30% contained.

• Woolsey Fire: A whopping 57,000 structures are still threatened by the Woolsey Fire in Southern California. As of Tuesday morning, the inferno was 35% contained. The blaze has torched 96,314 acres and has destroyed an estimated 435 structures.

• Hill Fire: Another Southern California blaze, the Hill Fire, has burned 4,531 acres and was 90% contained as of Tuesday morning.

• 500 fires in one month: California firefighters have battled more than 500 blazes in the past 30 days, said Cal Fire, the state's forestry and fire protection agency. In just the past week, more than 225,000 acres burned. That's larger than the cities of Chicago and Boston combined.

While the causes of the Camp and Woolsey fires have not been determined, state regulators are investigating two utility companies that reported incidents shortly before the two fires started.

Almost 15 minutes before the Camp Fire began near Pulga, PG&E said it experienced a transmission line outage about 1 mile northeast of the town.

But SoCal Edison said "at this point we have no indication from fire agency personnel that SCE utility facilities may have been involved in the start of the fire."

Both power companies say they are cooperating with state investigators.

So far, 42 bodies have been recovered from homes and vehicles in or near Paradise.

The Butte County Sheriff's Office identified three of the victims as Ernest Foss, 65, from Paradise; Jesus Fernandez, 48, from Concow; and Carl Wiley, 77, from Magalia.

The terrible air quality from the Camp Fire has spread across Northern California, forcing the University of California at Davis to cancel classes in both Davis and Sacramento, UC Davis tweeted.

California Highway Patrol Chief Brent Newman asked for the public's patience as teams clear affected areas. As part of those efforts, CHP teams removed 60 abandoned cars and set up barriers around dangerous areas. He urged people trying to cross them so they can reach their homes to be patient.

"It is not a safe environment whatsoever," he said.

More than 300,000 people have been forced from their homes statewide. Most of those residents live in Los Angeles County, where 170,000 were evacuated.

The evacuees included celebrities who lost their homes in Malibu as well as first responders who are still working despite losing their own homes.

More than 8,000 firefighters are battling wildfires across California, including many from out of state.

Cal Fire tweeted a map showing all the states where firefighters are coming from -- including Alaska, Indiana and Georgia.

"Cal Fire wants to recognize the many out of state partners that have joined in battling these wildfires," the agency said.