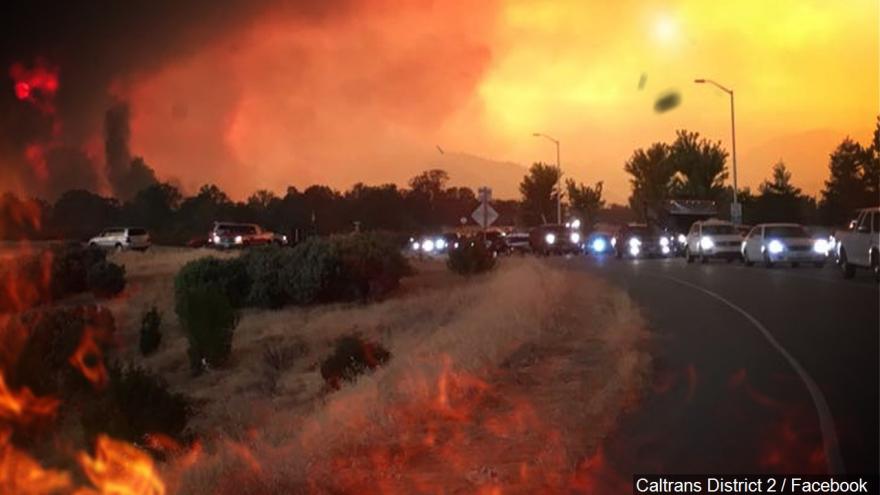 REDDING, Calif. (AP) — Thousands of dazed evacuees struggled to keep their emotions in check while trying to take care of themselves and their pets as a deadly wildfire in Northern California raged into its fourth day.

Anna Noland, 49, was evacuated twice in three days before learning through video footage that the house she last saw under dark and windy skies had burned.

She expected to spend Saturday night at a shelter at Simpson College in Redding while she searches for another place to live.

"I think I'm still in shock," Noland said. "It's just unbelievable knowing you don't have a house to go back to."

Noland is among the 38,000 people evacuated after the Carr Fire roared into the outskirts of Redding in Shasta County, leaving five people dead, including two firefighters, a woman and her two great-grandchildren, ages 4 and 5.

"My babies are dead," Sherry Bledsoe said through tears after she and family members met with Shasta County sheriff's deputies.

A vehicle problem ignited the fire Monday, but it wasn't until Thursday that the fire exploded and raced into communities west of Redding before entering city limits.

On Saturday, it pushed southwest of Redding, the largest city in the region, toward the tiny communities of Ono, Igo and Gas Point, where scorching heat, winds and bone-dry conditions complicated firefighting efforts.

The fire, which grew slightly Saturday to 131 square miles (340 square kilometers), is the largest fire burning in California. Nearly 5,000 structures were threatened and the fire was just 5 percent contained.

The latest tally of 536 destroyed structures was up from 500 earlier in the day, and sure to rise. A count by The Associated Press found at least 300 of those structures were homes.

Bonnie and Jerry Kieffaber grabbed most of their medications when they left their home in Redding on Thursday, but they forgot his insulin. Days later, police won't let them back inside because it's still too dangerous.

Bonnie Kieffaber, 69, says being away from home is expensive.

"All of our food was there, and now we're draining our checking account trying to keep gas in the car and buy food too," she said while grabbing a hot meal at a Red Cross shelter.

"It's exhausting," she said. "The heat and the stress of it all, and praying for everybody and all of our friends."

The firefighters killed in the blaze included Don Ray Smith, 81, of Pollock Pines, a bulldozer operator who was helping clear vegetation in the path of the wildfire. Redding fire Inspector Jeremy Stoke was also killed, but details of his death were not released.

Sherry Bledsoe's two children, James Roberts, 5, and Emily Roberts, 4, were stranded with their great grandmother Melody Bledsoe, 70, when walls of flames swept through the family's rural property Thursday on the outskirts of Redding.

The three were among more than a dozen people reported missing after the furious wind-driven blaze took residents by surprise and leveled several neighborhoods.

Shasta County Sheriff Tom Bosenko said he expects to find several of those people alive and just out of touch with loved ones. Officers have gone to homes of several people reported missing and found cars gone — a strong indication they fled.

Authorities also issued evacuation orders in Napa County, famous for its wine, when several structures caught fire, the Napa Valley Register reported. The blaze had blackened 150 acres and was at 10 percent containment.

Throughout the state, Cal Fire officials said more than 10,000 firefighters were on the line, making progress on 14 large wildfires.

In Shasta County, Matt Smith, a Forest Service pilot with 13 years' experience as a smokejumper, says he used hoses to save his house in the well-kept neighborhood of Lake Redding Estates.

Burned and twisted bicycle frames, refrigerators, and piles of rubble were still smoking Saturday around his property.

Smith said he arrived home Thursday as evacuees were racing out.

As a former firefighter, he said he always kept an escape route in mind — possibly his neighbor's pool.

On Saturday, he had a blistering burn on his hand from grabbing his propane tank and wrestling it away from the house and into the front yard. His nose and ear also had burns.