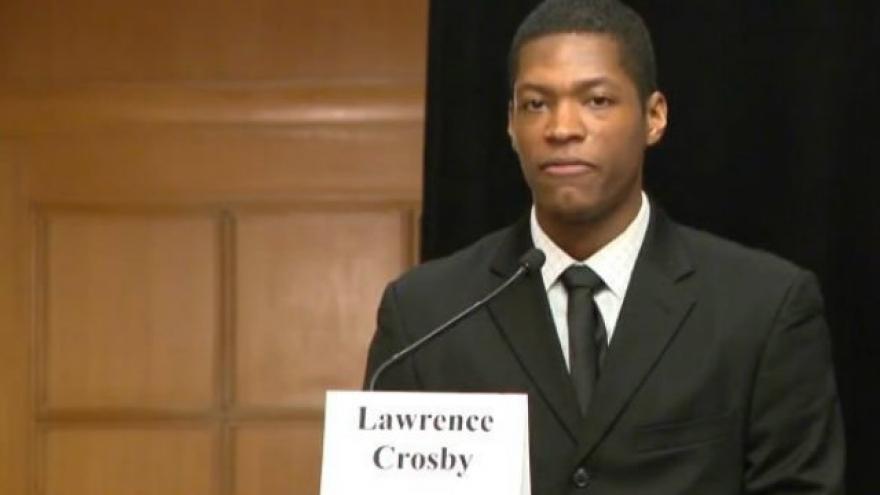 The Evanston Police Department has settled a civil case against a then Northwestern University engineering grad student accused of stealing his own car. Photo courtesy WBBM

Chicago, IL (WBBM) -- The Evanston Police Department has settled a civil case against a then Northwestern University engineering grad student accused of stealing his own car.

On October 10, 2015, 25-year-old Lawrence Crosby pulled over, got out of his car with his hands up, and was taken to the ground by law enforcement.

Evanston police officers are accused of striking Crosby 11 times before learning the car in question was his.

For the first time since, the now 28-year-old Dr. Crosby spoke publicly about what happened and the lasting effects following a 911 call where someone mistakenly thought he was breaking into a car.

“It’s not easy for me to have to be put back into that situation and have to relieve it again,” Crosby said. “At that moment in time, I did not know if I would make it to the end of the night.”

His attorneys said, following the incident, the Evanston Police Department put out a now-deleted video defending the officer conduct.

“I’ve had to deal with post-traumatic stress and having fear of the police, honestly,” Crosby said.

Prosecutors accused Crosby of charges including resisting. He would later be found not guilty and bring a civil case against the city and officers.

“The settlement was for $1.25 million, and I consider that a fair and just compensation for the experience that I went through,” Crosby said.

Crosby said no officers were disciplined following the stop. He adds he never received an apology from the city or police.

Crosby is hoping to start conversation about implicit bias, the unconscious use of stereotypes in our daily routines.

He’s hoping to talk with law enforcement, academics and others about how that impacts our lives, including how it could have ended his.

An attorney for the City of Evanston said there’s no admission of liability in the settlement. It still must be approved by the city council. That’s currently scheduled for Jan. 28.