'Not a pretty sight': Hurricane Florence has experts worried 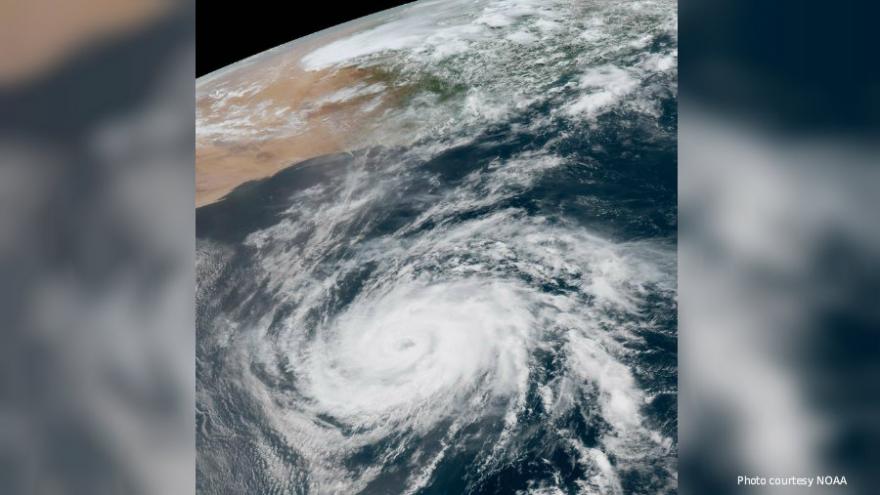 WASHINGTON (AP) — To whip up a monstrous storm like the one chugging for the Carolinas you need a handful of ingredients — and Florence has them all.

Time-lapse video of a #NOAA WP-3D Hurricane Hunter (#NOAA42) flight into Hurricane #Florence on Sept. 10, 2018. Get the latest on the storm at https://t.co/MlZk25kG0d. Credit: Nick Underwood/NOAA pic.twitter.com/FQ3RJMKVUU

"The longer it stays, the more wind, the more rain. That means the more trees that could fall, the more power outages," National Hurricane Center Director Ken Graham said.

"This one really scares me," Graham said. "It's one of those situations where you're going to get heavy rain, catastrophic, life-threatening storm surge, and also the winds."

The National Hurricane Center Tuesday afternoon increased its rainfall forecast to 15 to 25 inches of rain and 35 inches in isolated spots. But a computer simulation known as the European model predicts some places could get 45 inches. Sound unlikely? It's the same model that accurately predicted that last year's Hurricane Harvey, which also stalled over land, would drop 60 inches.

"It does look a bit similar to Harvey in a sense that it goes roaring into shore and then comes to a screeching stop," said MIT meteorology professor and hurricane expert Kerry Emanuel. "This is not a pretty sight."

Florence is unusual in that it is aiming at the Carolinas from the east. Usually storms come to the Carolinas and mid-Atlantic from the south — and those usually curve safely out to sea.

We cannot stress this enough: #Florence poses a very serious threat to people who live far away from the coast. Heavy & long-lasting rainfall ?️could lead to CATASTROPHIC flooding? in inland parts of NC, SC, VA & possibly other states. Are you prepared? https://t.co/tXKco1XEd1https://t.co/tgV6Fp3Dt0

But a weather formation known as a high-pressure ridge is parked over the U.S. East coast, preventing Florence from doing the normal turn, said University of Miami hurricane expert Brian McNoldy.

After Florence makes landfall, that ridge, now over Washington and New York, will move east — but be replaced by another one forming over the Great Lakes that will likely keep the storm stuck, McNoldy said.

Florence's path remains uncertain. It may move a little north into Virginia or a little south into South Carolina. But it's such a large storm that the rain will keep coming down in the region no matter where it wanders. And with the Appalachian Mountains to the west, there could be flooding and mudslides, experts worry.

Florence's large size — tropical storm force winds extend 170 miles from the center in all directions — means its fury will arrive long before the center of the storm comes ashore, Graham said.

Some of Florence's behavior, both what has been seen so far and what experts expect, show the influence of climate change.

The ocean waters that Florence is travelling over are about 2.7 degrees (1.5 degrees Celsius) warmer than normal, McNoldy said. Even normal water is warm enough for a storm to form there, but this adds to the storm's fuel and its rainfall. The air is holding 10 percent more water that can be dumped as rain.

And the storm surge, which could be as much as 12 feet in some areas, will be on top of sea level rise from climate change. For example, the seas off of Wilmington, North Carolina have risen 7.5 inches since 1935, according to NOAA.

Jennifer N. Kay contributed to this report from Miami.