VIDEO: NTSB examining scene to determine cause of helicopter crash 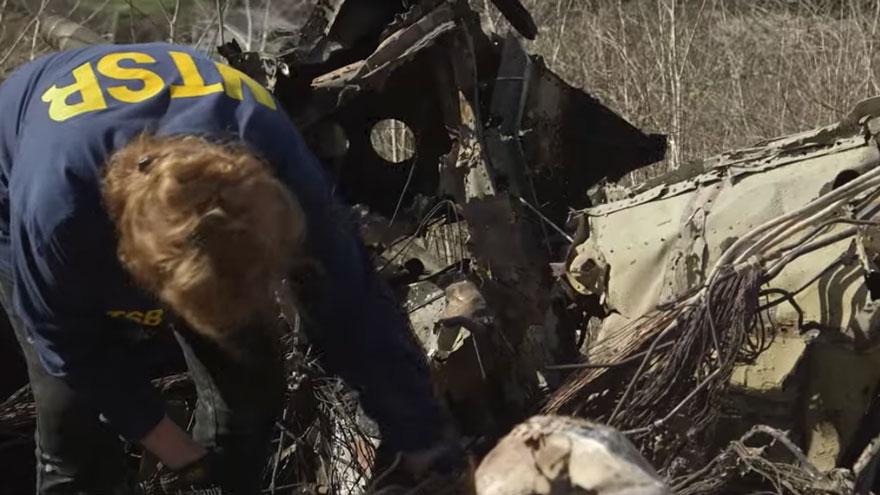 (CNN) -- In his final transmission, the pilot of a helicopter that crashed, killing nine people including NBA legend Kobe Bryant, told air traffic control he was climbing to avoid a cloud layer, the National Transportation Safety Board said Monday.

When air traffic control asked the pilot what he planned to do, there was no reply, NTSB board member Jennifer Homendy told reporters. The last radar contact was around 9:45 a.m. (12:45 p.m. ET) Sunday, she said.

The NTSB, which is investigating the cause of the crash, detailed the helicopter's final moments before it crashed into a hillside in Calabasas, California, under foggy conditions. Visibility was so low Sunday morning that the Los Angeles Police Department grounded its helicopters, department spokesman Josh Rubenstein said.

The crash impact broke the helicopter into pieces, creating a debris field stretching about 500 to 600 feet, according to Homendy.

"There is (an) impact area on one of the hills and a piece of the tail is down the hill, on the left side of the hill," she said. "The fuselage is over on the other side of that hill, and then the main rotor is about 100 yards beyond that."

When asked about any chance for survival, Homendy said: "It was a pretty devastating accident scene."

Bryant, 41, and the other passengers were headed to Thousand Oaks for a basketball game, where Bryant's 13-year-old daughter, Gianna, was expected to play and Bryant was expected to coach. Gianna and two teammates were among the victims.

While SVFR clearance is "pretty normal," he said, "it's not something that's often recommended."

During the pilot's conversation with air traffic control, they advised the pilot there was a delay due to traffic, Homendy said.

Homendy said the helicopter flew in the Burbank and Van Nuys airspace at 1,400 feet, heading south and then west.

The pilot requested flight following, which is radar assistance for a flight that helps the pilot avoid traffic, to continue to Camarillo, she said, But air traffic control said the helicopter was too low to provide flight following assistance, she said.

About four minutes later, the pilot said he was climbing to avoid the cloud layer, she said.

Homendy said the crash created a crater at 1,085 feet above sea level.

Los Angeles County Sheriff Alex Villanueva said there has been a lot of interest from the public trying to get to the crash site. An emergency ordinance was issued, making it a misdemeanor to unlawfully access the site, the sheriff said.

Deputies are patrolling the rugged terrain on horseback, Villanueva said. The terrain is so difficult to access that authorities bulldozed the road to get a car to the location.

A day after the crash, the National Basketball Association said Tuesday night's Los Angeles Lakers game versus the Los Angeles Clippers would be postponed. The decision "was made out of respect for the Lakers organization," which is mourning the deaths of the nine victims, the league said.

The game was scheduled to take place at the Staples Center in Los Angeles and will be rescheduled, the league said.

The Los Angeles County coroner's office said Monday a team of investigators recovered three bodies Sunday night, before darkness and safety concerns suspended the search. It's unclear which victims have been recovered.

Children and parents were on board

Alyssa was Gianna's teammate, OCC assistant coach Ron La Ruffa said. And Altobelli would routinely travel with his daughter for her basketball games.

OCC President Angelica Suarez said she was devastated by the loss of "a member of our OCC family."

"Coach Altobelli was a giant on our campus -- a beloved teacher, coach, colleague and friend," Suarez said in a statement. "This is a tremendous loss for our campus community."

Another parent, Christina Mauser, was also killed in the crash. Mauser was an assistant girls basketball coach for a private school in Corona del Mar, California.

"My kids and I are devastated. We lost our beautiful wife and mom today in a helicopter crash," her husband Matt Mauser wrote on Facebook.

Payton Chester and her mother Sarah Chester were also passengers on the helicopter and killed in the crash, Payton's grandmother, Cathy Chester, wrote on Facebook.

She said they were on their way to the same basketball game.

The pilot of the helicopter was Ara Zobayan, according a former colleague at the Island Express helicopter company and a neighbor.

Kurt Deetz, a pilot who worked at Island Express with Zobayan, said he would trust Zobayan to fly him.

Zobayan's neighbor, Robert Sapia, said Zobayan loved his job and would show him photos of the celebrities he would fly around, including Bryant.

Zobayan was an instrument-certified pilot who earned his commercial pilot's license in 2007, according to the Federal Aviation Administration's pilot certification database.

He was also a certified flight instructor for instrument instruction for helicopter pilots, the records show. The database also shows Zobayan was up to date on FAA-required annual medical exams.

Homendy said Zobayan had a commercial certificate and was a certified flight instructor who had 8,200 hours of flight time as of July 2019, she said.

"We have been in contact with the NTSB and stand ready to provide assistance and support to the investigative authorities. ... Safety is our top priority; if there are any actionable findings from the investigation, we will inform our S-76 customers."

The helicopter was built in 1991 and was most recently registered to Island Express Holding Corp., according to the FAA.

In a statement, Island Express Helicopters, owner and operator of the helicopter, said it was "deeply saddened" by the crash.