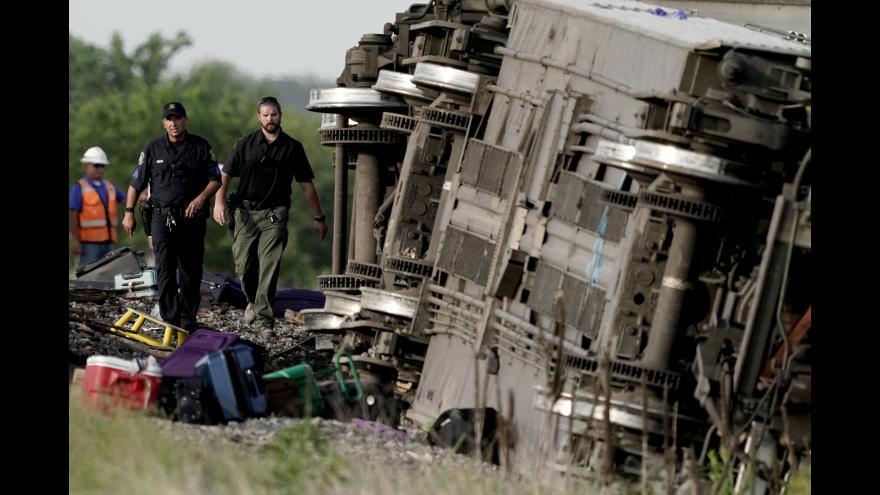 A team of investigators from the National Transportation Safety Board will arrive in Missouri on June 28 to learn more about the derailment of an Amtrak train that left at least three people dead, according to the agency's chair.

(CNN) -- A team of National Transportation Safety Board investigators arrived in Missouri Tuesday to probe the derailment of an Amtrak train that left at least four people dead and sent surviving passengers scrambling from the wreckage.

The derailment occurred as the train, traveling eastbound to Chicago, collided with a dump truck at a crossing near the town of Mendon in north-central Missouri at about 12:42 p.m. Monday, according to Amtrak. Eight of the train's cars and two locomotives left the track, the company said.

The death toll rose from three to four Tuesday afternoon, according to a tweet by the Missouri State Highway Patrol (MSHP). Three of the victims were train passengers, according to MSHP. In a press conference Monday, Cpl. Justin Dunn, a spokesperson for MSHP Patrol Troop B, said one of the deceased victims was in the dump truck.

Additionally, MSHP said approximately 150 people were taken from the scene to local hospitals "for treatment of injuries that range from minor to serious in nature." A county ambulance service director previously said at least 50 people were injured.

University Hospital in Columbia treated 19 people following the crash and eight remain hospitalized as of Tuesday afternoon, according to University of Missouri Health Care.

Approximately 275 passengers and 12 crew members were on board at the time of the crash, Amtrak said in its statement.

"We started feeling the train tilting over to the right. That's when it kind of went through my mind that this is life or death. This is very serious," Dax McDonald, who was on the train with his sister Samantha, told CNN's "New Day."

Their train car had tipped over and was laying on its side. Samantha McDonald said she looked straight up and saw the windows that offered their only chance for escape.

"We had to climb 10 feet straight above us to the escape windows," she said. "I was able to lift myself up, and then there was other passengers that had gotten out before us from the other train cars that were able to help lift me up and our family," she said. "It was absolutely insane."

Preliminary reports indicate the crossing where the train hit the dump truck was "uncontrolled," meaning there were no lights or mechanized arms.

NTSB investigators arrived at the site Tuesday. Chair Jennifer Homendy told reporters they were trying to gather data such as the speed of the train. The speed limit in the area for trains is 90 mph.

The train has two forward facing cameras and investigators are also downloading data from the train's event recorder and checking to see whether the truck's electronic control module was damaged in the collision, Homendy said.

Amtrak officials said in a statement Monday night they were "deeply saddened" over the loss of life and injuries.

"Amtrak is working with local authorities to make sure those who are injured get medical care and everyone else receives services and transportation. We are grateful for the support from the local authorities who provided assistance and resources for our customers and employees," the statement said.

The collision was the third in two days involving an Amtrak train. On Sunday, 85 passengers were on board a train in rural California that hit a vehicle. Three people were killed and two people suffered major injuries, all of whom were in the vehicle, according to officials.

The crossing has arms, audio and visual signs, Carrillo said. A release from the Jefferson County coroner says the person in the car drove around downed arms.

Jason Drinkard, a high school teacher on board and traveling with students en route to a conference in Chicago, told CNN affiliate KMBC passengers began fleeing as soon as the train skidded to a halt. Their car was one of many that tipped over on its side, he said.

"People were already out of the train, popping the windows off," said Drinkard, who was uninjured. He, his wife and others "started evacuating people out of the cars as quick as possible."

His students were shaken up but largely okay, he told KMBC, yet he found passengers in another car were slow to exit and required further first aid.

"I looked at my wife and I said, 'There is no way we got out of this without God,'" he said. "I'm very thankful that everyone in my group, they're going home tonight."

Robert Nightingale, a passenger with a sleeper car, told CNN he was taking a nap when he heard something.

"It all happened like slow motion. It started to rock and, and rock, and then flicker, and then it just all of a sudden -- all this dust was through my window," Nightingale said.

He said the train fell over on the side that his compartment was on.

Nightingale, who was not injured, said he couldn't get through the window, which was blocked by dirt, so he grabbed his backpack and climbed into the hallway. Then he moved into a neighboring room where he found a way to climb out and onto the side of the train.

He said some people helped others reach the ground where he and others walked to the front of the train. He said the truck looked like it had big boulders in it.

"It hit something major to cause ... every car to go off," he said.

Scouts on board helped those in need

Two Boy Scout troops from Appleton, Wisconsin, were on the Amtrak train and assisted people who were hurt, Scott Armstrong, director of national media for Boy Scouts of America, told CNN Monday.

The Scouts on the train are believed to be between 14 and 17 years old, Armstrong said, adding none of them were hurt. Eight adults were with the troops.

Passenger Larry Brown told CNN affiliate KCTV that the Scouts and their adults "were really the first responders" in the initial moments after the crash.

"When I opened up one of the windows to open up the roof area, they were already up there trying to help people come out," he told KCTV.

"They did a real good job. Very mature for their age. Whatever they're teaching them in the Scouts, it paid off today."

The two troops were on their way back from a stay at Philmont Scout Ranch in New Mexico, Armstrong said, and the organization is working with them on completing their trip home to Wisconsin.