Nxivm founder sentenced to the remainder of his life in prison 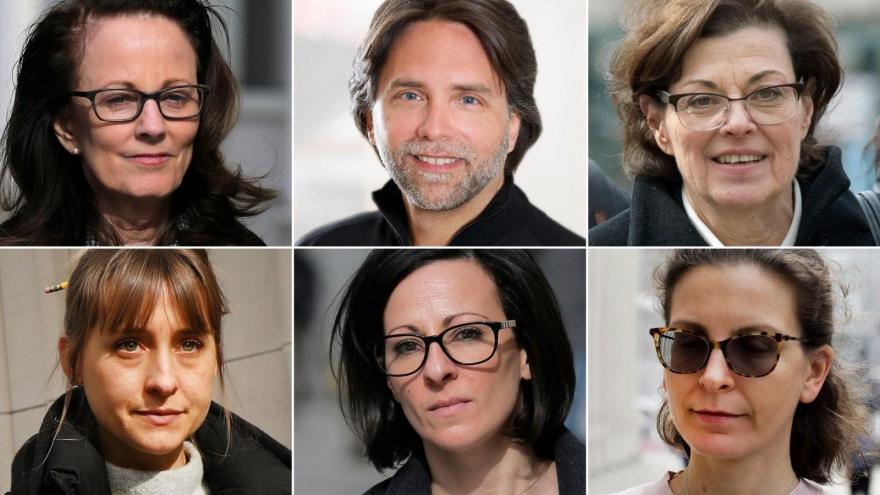 The founder of Nxivm, Raniere is accused of manipulating and grooming Daniela and other young women as "slaves" for his financial benefit and sexual pleasure with the help of an inner circle of women that included actress Allison Mack and Seagram's heiress Clare Bronfman.

(CNN) -- Keith Raniere, founder of the company Nxivm, has been sentenced to 120 years in prison.

US District Judge Nicholas Garaufis read the sentence in Brooklyn federal court Tuesday, after more than a dozen people gave victim impact statements at his sentencing.

Garaufis said in his decision that the crimes Raniere was convicted of are "cruel, perverse and extremely serious."

"Despite everything that has happened and despite the countless victims who have given voice to their great pain, Mr. Raniere remains unmoved. Indeed, he maintains his innocence," Garaufis said. "To him, the brave victims who have spoken out about the abuse suffered at his hands -- including those who spoke today -- are liars."

Raniere, 60, was convicted in 2019 by a jury in Brooklyn federal court of counts including racketeering, sex trafficking, sexual exploitation of a child and human trafficking.

"Keith Raniere will not be able to victimize people anymore after today's sentence and we're very grateful for that," said Acting US Attorney for Eastern District of New York Seth DuCharme. "It struck me in listening to the victims that Raniere really twisted people's trust and their need to find some meaning and hope in their lives in just the most insidious and devious ways."

Fifteen of Raniere's victims either spoke or had statements read at his sentencing in Brooklyn federal court, John Marzulli, a spokesman for the US Attorney's Office of Eastern New York, said.

One of those victims was the 15-year-old girl at the center of the sexual exploitation of a child charge that Raniere was convicted of. A redacted copy of her victim impact statement was posted to the court record, in which she said she was 15 and he was 45 when they began to have sex, and that he took nude photos of her.

"While he hid our sexual relationship from others, he explained it to me by telling me that I was very mature for my age. And I know now that it was false -- I was a child," her victim impact statement read. "He used my innocence to do whatever he wanted with me -- not just sexually but also psychologically."

CNN is not reporting the name of the girl, who is now an adult.

Also in Raniere's corner is "Battlestar Galactica" actress Nicki Clyne, who participated in part of the alleged Nxivm scheme and has not been charged with a crime. She did not respond to CNN's requests for comment.

Meanwhile, supporters' efforts to write letters and a petition that demands prosecutors acknowledge whether they acted ethically in the case "appear to be directed" by Raniere, government lawyers said in a court filing.

The New York Times reported that Raniere spoke before the court at his sentencing, maintaining his innocence, saying some of the victims were lying but also saying he was "deeply sorry."

"Where I am is caused by me," Raniere said, according to The New York Times. "This is all my doing."

Raniere's attorney Marc Agnifilo has not responded to CNN's multiple requests for comment.

The girl whom Raniere was convicted of sexually exploiting when she was 15 said in her victim impact statement that she would not say Raniere's name out loud.

"I will only call him 'he,'" her statement said. "He doesn't deserve anything more than that."

She detailed how she met Raniere at the age of 13, and how he groomed her by asking her sexually explicit questions "escalating in detail over time."

"He told me to keep it all a secret, immediately severing me from my family and friends and effectively making himself my only resource," her statement said.

She said that when she was older and tried to distance herself from him, he punished her "emotionally, psychologically and sexually."

She said she was able to leave Raniere and the Nxivm community in 2017, thanks to her sister, Daniela, who testified against Raniere at his trial.

"As I write this statement, the gravity of what he did to me becomes more and more clear. He hid his abuse behind ideas and concepts of nobility," her statement said. "He demanded loyalty but was loyal to no one but himself. He left me weak, confused, and completely unprepared for life outside of his control."

Her sister, Daniela, testified during the trial that after she found out Raniere was having sex with her sister, he told her, "... there were some women -- girls -- that were more emotionally mature than others."

The girls' father was among those who submitted letters in support of Raniere ahead of his sentencing in which he called the Nxivm founder "Honest, Whole, Brilliant Intelligence, always ready to help, Cheerful and In Love with Humanity."

Garaufis said he found the man's letter "a disgrace."

"I am frankly baffled why anyone thought this letter would help Mr. Raniere," Garaufis said in his decision.

Garaufis also said Raniere's abuse of the girl was "cruel to the point of inhumane."

The girl was part of a group called DOS, what prosecutors said was a secretive group of women who would become "slaves" once they joined the group, and who feared leaving because their "masters" had compromising information about them.

India Oxenberg, who was also a DOS "slave," wrote in her victim impact statement that she was "instructed" to seduce Raniere and was branded with what were Raniere's initials, unbeknownst to her. Raniere was not charged in connection with her allegations.

"I was branded with a cauterizing pen," Oxenberg's statement said. "This extremely painful procedure lasted for over 30 minutes and took months to heal. I may have to live the rest of my life with Keith Raniere's initials seared to my flesh. I am not sure how I will ever be able to fully put this behind me."

Oxenberg said in her statement that she wakes up in the middle of most nights, reliving Raniere's "unwanted touch."

"I was totally frozen, leaving my body so (that) I didn't have to be with you when you would rub your fingers across my brand without me knowing it was your monogram you gazed and smiled at," her statement said.

Oxenberg said in her statement that she would like to never have to live in fear of Raniere victimizing her or others again.

Prosecutors described Raniere as the leader of a criminal enterprise who recruited people at Nxivm to exploit them "for power, for profit, or for sex."

Prosecutors argued at his trial that Raniere "maintained control over his followers and his criminal organization ... by ensuring that no one questioned him." "No one could challenge his authority," Assistant US Attorney Tanja Hajjar said. "The defendant used shame and humiliation as ways to break people down."

Since his conviction, Raniere has remained "unrepentant" with "no empathy for his victims," wrote prosecutors, who in their sentencing memorandum shared emails and transcripts of conversations Raniere has had in recent months from prison with those who still back him.

"In his communications with his supporters, Raniere repeatedly attempts to cast himself as a victim of persecution and harassment from the government and from unknown enemies," prosecutors wrote.

In a February email to a supporter, an incarcerated Raniere wrote that his prosecution was a "political, envy-driven, money-powered lie to destroy a community and keep me either incarcerated for life or otherwise 'disposed of,'" federal records show.

Referring to Garaufis, who oversaw his trial, Raniere in an April phone call with a supporter said: "This judge needs to know he's being watched," prosecutors say.

Raniere in another conversation with that supporter "offers lengthy diatribes" on the criminal justice system, "presumably for publication on a podcast," prosecutors said.

Garaufis on Friday had denied Raniere's motion for a new trial, in which his lawyers cited as "newly discovered evidence" testimony by people including Clyne. She wrote in an affidavit this month that she wanted to testify in Raniere's defense at his trial but couldn't because of "threats from the prosecution." Prosecutors called these claims "meritless" in court filings.

Garaufis wrote in his opinion that he takes seriously the allegations of prosecutorial misconduct but that the allegations in the affidavits submitted "provide scant and highly questionable evidence" of the government improperly threatening or intimidating witnesses.

Raniere sent an email to Clyne, a former DOS master, in November 2019, continuing to defend DOS and calling it "noble" and "vitally important for women and humanity."

"It is tragic the current organization has been stymied by a few envious men abusing position of power in government, media, and film; some women who didn't live up to their sacred honor and vows; and people in general who just feel threatened by this idea," Raniere wrote in a November 2019 email shared in a prosecutors' memo.

In her October 9 affidavit, Clyne wrote that when the idea for DOS was discussed in 2015, she "knew it wasn't going to be for everyone."

"I thought maybe only a handful of women would want to embark on this more extreme version of coaching and personal accountability," Clyne wrote. "Maybe the idea was simply too extreme, or too controversial for where most people are at on their journeys. I am willing to accept that reality. But that it was abusive or deceitful in any way is something I will firmly contest."

Five women who had been part of the Nxivm leadership have pleaded guilty to crimes related to the scheme. Among them is Clare Bronfman, heiress to the Seagram's liquor fortune, who was sentenced in September to nearly seven years in prison. Her attorneys are in the process of filing an appeal.