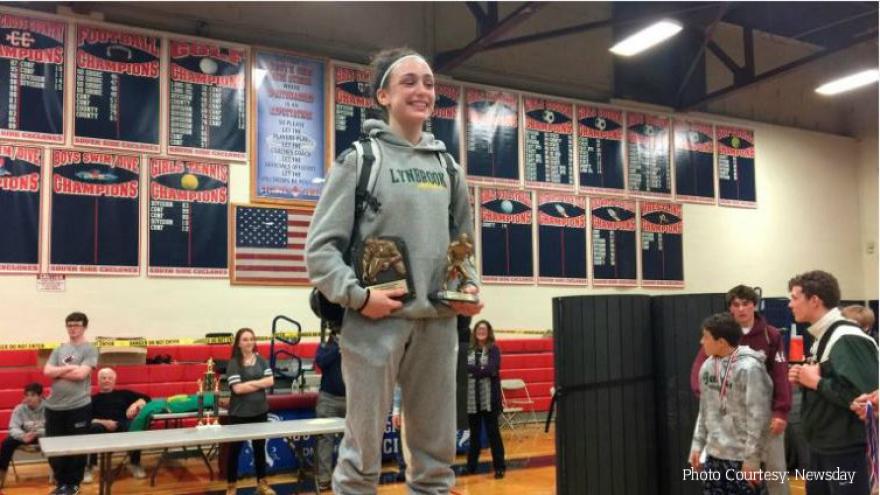 LYNBROOK, N.Y. (WCBS-TV) -- A high school wrestler on Long Island fought extra hard to get on the team, and is now proving to be just as tough as the rest of them on the mat — even better.

As CBS2’s Reena Roy reported, she’s been the talk of the town and made history as the only girl on her all boys wrestling team.

Ally Fitzgerald is also the first female to ever win a boys high school tournament on Long Island.

“A lot of people don’t like losing to a girl, so they try to use tactics like, ‘oh this is gonna be easy, oh she’s not good, and making fun of me and pointing, laughing,” she said. “I can’t focus on that, I focus on me.”

With laser sharp focus she proves them wrong again and again.

At just 5 feet tall and 100 lbs, the Lynbrook High School freshman has found the perfect way to do it.

“Now getting older, some of the boys are getting stronger, so I have to focus on my technique and beat them with my technique,” she said.

“First girl I’ve coached int he 30 years I’ve been coaching varsity wrestling. Her skills are above average and when you see her wrestle you can tell she’s technically sound,” he said.

Her signature move is a hip throw. A skill she’s been refining since age 9, after watching her little brother on the mat.

“I was watching him and I thought it was easy and I could do it,” she said.

Of course any success comes with some failure.

“I was so used to winning, then it started getting hard and my parents told me don’t give up, and I powered through,” she said.

Her eyes are always on the prize.

“I tell her you’re not a girl wrestler. You are a wrestler, and the boys that walk out there, I see them thinking, ‘oh it’s a girl,’ and when she goes out there, and she’s got her hand raised, it’s like the greatest feeling ever,” her mother Rebecca said.

It’s just the beginning for Ally. In a couple of months she’ll be trying out for a national team, and hopes to continue the sport in college, and one day the Olympics.

There has been a recent push to get an all-girls wrestling league in Nassau County and the surrounding areas.