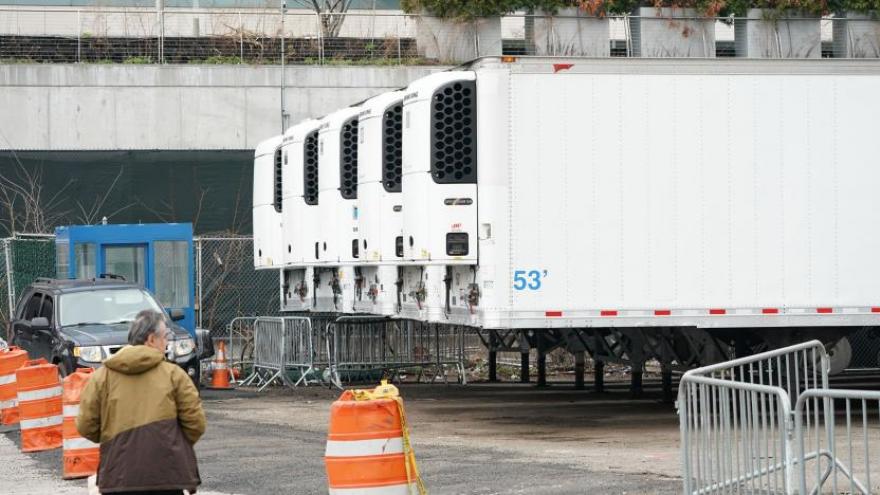 Refrigeration trucks are in place as workers build a makeshift morgue outside of Bellevue Hospital to handle an expected surge in Coronavirus victims on March 25, 2020 in New York. New York City may need to bury coronavirus victims in a local park as hospital morgues and refrigerated trailers parked outside hospitals reach capacity, City Councilman Mark Levine tweeted.

(CNN) -- After a city councilman said New York may need to bury coronavirus victims in a city park as morgues run out of room, Mayor Bill de Blasio made it clear Monday there are no such plans and that such rumors are "totally false."

"There will never, ever be anything like 'mass graves' or 'mass internment' in New York City ever," de Blasio said.

"If God forbid, we ever had to get to the point of a temporary burial, it would be individual by individual so that families could reclaim their loved ones when the crisis was over. But we're nowhere near that now."

City Councilman Mark Levine, who had caused the confusion with a series of tweets Monday morning, later tweeted "there will be *no* burials in NYC Parks."

The mayor and city medical examiner's office contended that capacity is not an issue.

De Blasio said the city is exploring using Hart Island in the Bronx for temporary burials if the need grows.

CNN has reached out to Levine for comment but has not heard a response.

Gov. Andrew Cuomo told reporters Monday morning he was unaware of the prospective plan tweeted by Levine, who is the city council's health committee chairman and who included the information in a thread of 13 tweets about the city's overburdened health care system.

After stopping to ask his staff whether they had heard anything, Cuomo reiterated, "I talked to New York City yesterday. I have not heard that this is an issue."

In a later tweet acknowledging the attention his original tweet received, Levine said he was referencing only a contingency for which the city is prepared. "BUT if the death rate drops enough it will not be necessary," he wrote.

The Office of the Chief Medical Examiner has purchased additional refrigerated trucks and the Federal Emergency Management Agency has provided the city with 80 of its trucks, so most hospitals have one or two morgue trucks, OCME spokeswoman Aja Worthy-Davis said.

"We have further capacity," she said. "There are no plans to extend to a city park."

De Blasio declined to provide extensive details on morgue capacity "because I don't think it's a great thing to be talking about publicly," he told reporters.

"It's going to be very tough, but we have the capacity," de Blasio said.

The military and the US Department of Health and Human Services have provided the city with substantial personnel and equipment, he said.

The medical examiner's office may request access to public or private cemeteries or purchase space for temporary internments, it says. If the city maxes out its refrigerated storage capacity, "the need for temporary interment on Hart Island may arise."

Hart Island is the site of a public cemetery housing more than 1 million bodies, many of them unclaimed or unidentified. The city's Department of Corrections typically handles burials there.

Update: After CNN reported the councilman's comments, he tweeted there would be no such plans, and Mayor Bill de Blasio said such rumors are 'totally false."